BANGOR, Maine (AP) — Marie Harnois stands on the banks of the Penobscot River at dusk, swirling a dip net under the water, fishing for eels — something her ancestors in the Passamaquoddy tribe have done for thousands of years.

Fishing has been a way of life for Maine’s American Indians since time immemorial — “Passamaquoddy” is derived from a word that means “the people who spear pollock” — and Harnois thinks it’s past time the state government’s regulators came to the table to share management of fisheries with the tribes.

“I think the tribe should be able to set their standards however they want,” she said, alongside sisters Fawn and Eva, as she emptied wriggling baby eels into a bucket. “They’re perfectly capable of managing resources.”

Like Harnois, members of Maine’s four federally recognized American Indian tribes are regrouping just as a tribal effort to forge a fishery management pact with state regulators is faltering. The tribes proposed an ambitious bill that called for regulators and tribes to craft “memorandums of agreement” about managing marine resources.

The bill, which stemmed from recent squabbles the tribes have had with regulators about quotas and gear used in the lucrative baby eel fishery, was soundly rejected by a key state legislative committee in May, and it appears unlikely to pass if it reaches the full Legislature.

But former Passamaquoddy tribe legislative Representative Matthew Dana, who sponsored the bill and withdrew from his seat in protest last week, said he is hopeful the tribe and state can still reach agreement without passing a law. The tribes feel as though the state is preventing them from beginning an era of cooperation with a government regulatory structure with which they have frequently been at loggerheads, he said.

“I thought this was going to go somewhere, and obviously it did not,” Dana said. “We’re trying to keep the lines of communication open and hopefully meet before the start of the season next year.”

There are about 8,000 Maine residents of Native American descent, about 2,500 of whom are Passamaquoddies. The other recognized tribes are the Penobscot Nation, Aroostook band of Micmacs and the Houlton band of Maliseet Indians. They are descendants of the Algonquian-speaking Wabanaki peoples who lived in Maine before the time of the earliest European settlements. The tribes have harvested everything from lobsters to porpoises from Maine’s waters over the centuries.

In that time, their methods have changed. Oral traditions say Penobscots would fish for eels by poisoning the water with berries and plants. Today the tribes fish mostly with modern gear. The importance of fishing to the tribes’ culture, however, has never wavered, Dana said.

“We know the importance of maintaining the balance of nature and the natural systems,” he said in a presentation to a legislative committee earlier this year. “We take only what we need.”

Tribal-state relations have a long and frequently difficult history in states around the country, particularly in managing resources, but there have been recent breakthroughs. In Washington, Gov. Jay Inslee this month signed a bill into law that creates a method for tribes to enter into pacts with the government to sell marijuana.

Maine Marine Resources Commissioner Patrick Keliher is “open and committed to dialogue with the tribes,” a spokesman said. Keliher opposed the tribes’ plan for shared management of fisheries, and he and his department have sparred with Passamaquoddies in recent years.

Keliher criticized Passamaquoddy leadership last month about the tribe’s use of fyke nets to fish for baby eels. The eels, also called elvers, are a moneymaking species that is highly prized in Asian markets, sometimes selling for $2,000 per pound, and are subject to strict quotas. Both tribal and nontribal members fish for them in the state’s rivers and streams. Keliher said the tribe’s gear could cause the state to exceed the quota, but Passamaquoddy leaders have said the tribe plans to continue using the nets.

The Penobscot Nation and Passamaquoddy Tribe have also said recent actions by Gov. Paul LePage, such as the withdrawal of an executive order that sought to promote cooperation between the state and the tribes, have damaged relations. The two tribes and the Aroostook Band of Micmacs said in a joint document on Wednesday that they are no longer recognizing the authority of state officials, lawmakers and courts to interfere with their “self-governing rights.”

And a year ago, the tribe resisted the state’s effort to enforce quotas on individual tribal elver fishermen. The Passamaquoddies believe natural resources belong to all tribal members and not individuals, but they eventually agreed to the quotas.

Back in Bangor, Fawn Pirruccello, one of Harnois’ sisters, was having better luck with her elver catch than she had expected. All three sisters, in fact, were doing well for the breezy, cool conditions of a May evening. While she said she’s not a big fan of the quotas, for now, state laws leave her little choice. 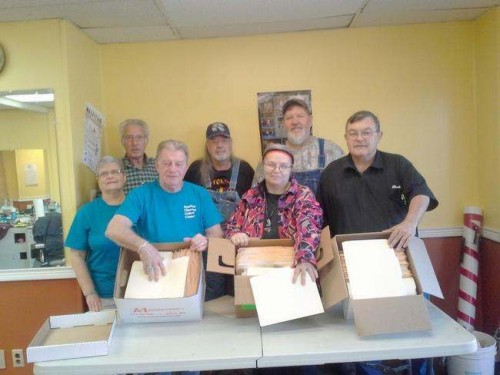