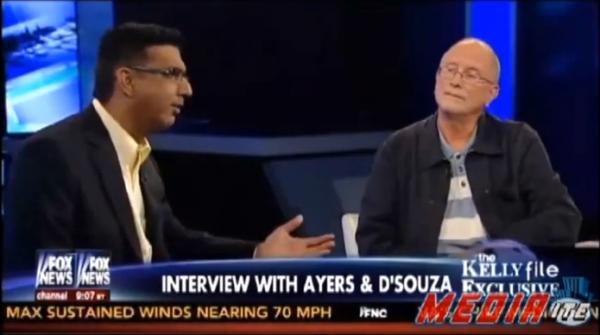 During a July 2 interview with Megyn Kelly, host of Fox News’ “The Kelly File,” filmmaker Dinesh D’Souza says the genocide of the Indigenous Peoples of this country didn’t happen.

Bill Ayers, an elementary education theorist and former leader in the opposition of U.S. involvement in the Vietnam War, went head to head with D’Souza during the interview.

“The American Indian population shrank by 80 percent over 150 years,” D’Souza says. “The main reason for that was not because of warfare or systematic killing, it’s because the white man brought with him from Europe diseases to which the Native Americans… did not have any immunities.”

D’Souza, who produced the film “America,” couldn’t be more wrong. The diseases weren’t only brought over from Europe, but literally handed to the Indigenous Peoples in blankets with the intention of wiping out the population to take their land. Do we even need to mention the Indian Removal Act or boarding schools?

Watch the full video and see Ayers and the YouTube commentator defend these positions.

Here’s a video from YouTube—start watching at 2:35—with some commentary:

Or read the transcript from the show here.