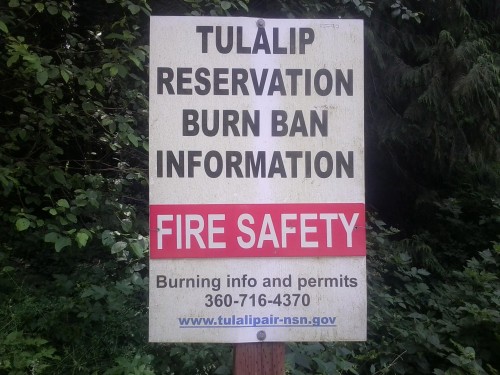 All outdoor burning is banned with the exception of recreational fires in approved fire pits
Recreational fires must:
·        Be built in a metal, concrete or rock fire pit, such as those typically found in designated campgrounds; and not be used as debris disposal;
·        Grow no larger than three feet in diameter;
·        Be located in a clear spot free from any vegetation for at least 10 feet in a horizontal direction, including at least 25 feet away from any structure and allow 20-foot vertical clearance from overhanging branches;
·        Be attended at all times by an alert individual and equipment capable of extinguishing the fire.
·        Cultural fires are exempt but must Be attended at all times by an individual and equipment capable of extinguishing the fire .
All outdoor burn permits are suspended until this ban is lifted. This ban will remain in effect until there is a sustained period of rainfall and the fire risk returns to low.
As the season progresses and fire danger continues to get higher additional restrictions will be implemented.
Source: Snoqualmie Nation

The Snoqualmie Tribe is donating $250,000 to assist in the relief efforts for those affected by the devastating fires burning in Eastern Washington. In total the Tribe is giving $200,000 to the American Red Cross Eastern Washington region designated to the 2014 fire victims and $50,000 to Washington Animal Search and Rescue.

“We are all part of a larger community, and felt in a time like this that it is important to reach out and help those in need. Our hearts go out to all of those affected by this massive fire, and hope that our contributions can help in the recovery and healing process,” said Carolyn Lubenau, tribal chairwoman.

After extensive research, the Tribe decided to place its donations with the American Red Cross and Washington Animal Search and Rescue. Both groups can directly benefit from the donations and make a difference in people’s lives. Officials including the Wenatchee Red Cross have said the best way for people to assist in the relief effort was through monetary donations.

“Our thoughts and prayers are with those who have suffered a loss due to a fire and also to those working so diligently to put it out,” adds Lubenau.

A state of emergency has been declared in 20 Eastern Washington counties as new and existing wildfires threaten several hundred homes, as well as businesses, infrastructure and natural resources.

The declaration allows officials to get help from the Washington National Guard and the State Guard if needed. It also directs state agencies to help local governments in responding to wildfires.

As of early Wednesday morning, a 40 percent perimeter was contained at the state’s largest wildfire, Mills Canyon, near Entiat. The fire is holding steady at about 35 square miles.

Conditions could be an issue for firefighters Wednesday, according to meteorologists. Highs in the 100s are anticipated. Added to windy conditions, that could challenge firefighters and homeowners.

State officials are worried extreme fire weather conditions and the lack of firefighting resources in the Northwest could hamper future firefighting efforts in the state.

Six other fires were sparked Tuesday. New wildfires, some started by lightning, are keeping crews busy in central Washington. A brush fire temporarily closed a 20-mile stretch of Interstate 90 Tuesday night in the central part of the state.

The Washington Department of Natural Resources has put a burn ban in place for all state lands that is projected to last until September 30. 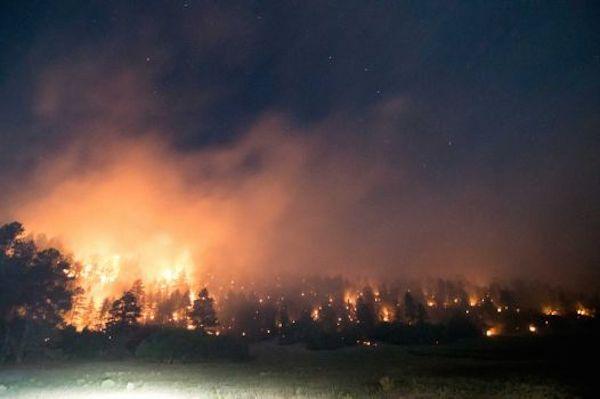 By Eric Stevick, The Herald

MARYSVILLE — The city fire marshal has asked police to investigate a Saturday night blaze along the Marysville waterfront that caused a building at the vacant Welco Lumber mill to collapse.

Although no formal cause has been determined, fire marshal Tom Maloney said Sunday that it appears to be neither natural nor accidental. Chances are it was caused by someone either intentionally or unintentionally, he said.

The mill has been closed for several years and has been shelter for squatters and transients in the past.

Firefighters were called to the former mill site off First Street shortly after 10 p.m. The building was in flames and firefighters “went defenive right away,” Maloney said.

It took 30 minutes to get the fire under control.

No injuries were reported.

Typically, there have been two to three calls a year for small fires at the site, Maloney said.

In its heyday, the five-acre mill provided jobs to about 150 people, producing cedar fencing and dimensional lumber that was used primarily in home construction. Welco Lumber closed its Marysville mill with a drop in the area’s home construction market.

In 2010, a 13-year-old Marysville boy told police he set a summer fire that caused extensive damage to the lumber mill. Witnesses reported seeing a group of young people in the area just before the fire started.

Three other Marysville boys, all 13, were identified as being with the suspect at the time of the fire

The city wants the property owners to provide tighter security for the site, Maloney said. It also is considering a citation to compel the owners to get the building cleaned up.

NESPELEM, Wash. – Though black plumes of smoke unfurled from the charred remains of the Colville Reservation’s Headquarters on Monday, tribal members just across the street from the ruins lifted a symbol of hope.

Shawnee BearCub and her family built a teepee in honor of their lost history, providing a place of prayer and safety for members of the tribe.

“It’s resilience in the face of adversity,” BearCub said, hoisting the teepee sticks in the air Monday afternoon.

Fire razed the tribe’s headquarters at 1:15 a.m. Monday. It was the second fire in the past year that leveled an important cultural center. The tribe’s longhouse burned in December when a heater malfunctioned. Religious and cultural items including beaded regalia were lost.

Matt Haney, deputy director for public safety for the tribe, said even though firefighters arrived within minutes, fire had engulfed and destroyed the headquarters.

Investigators have not identified the cause of the blaze yet. The fire continued to smolder Monday afternoon. Colville Tribes Fire Cmdr. Chris McCuen said the entire structure dropped into the basement of the building, making it difficult for investigators to determine an origin or a cause.

Arson crews and tribal police were at the scene, but Haney said it’s too early to determine whether the fire was intentionally lit. Firefighters were able to stop the fire from reaching the nearby U.S. Bureau of Indian Affairs.

Firefighters worked to keep the blaze contained well into Monday afternoon and evening. All that remained of the three-story structure was a blackened pit in the ground.

This is the first time since 1975 the Confederated Tribes of the Colville Reservation are without a central government office, according to a news release. The building housed the Colville Business Council and other administrative offices, leaving about 40 tribal employees without an office. No one was in the building at the time.

The fire destroyed important documents, as well as many cultural and historical items, Haney said.

“There was so much history stored in the building,” he said.

Ricky Gabriel, a member of the Colville Business Council, said the loss of government documents and computers will impede their ability to operate efficiently and administer services.

Fortunately, many documents were backed up and can be accessed.

The tribe has already found a temporary office at the tribal legal offices.

In spite of the recent losses, BearCub said she’s doing her part, however small, to help the community move on from the tragedies. The teepee has been in her family for generations, and she said it will serve as a place of hope and prayer for those mourning the building.

The teepee represents the cycle of life, she said. Just like the administrative building, it can be taken down, but rebuilt, she said.

“My spirit guides me to do these things,” she said.

The building is a tremendous loss to the community, and council members are upset that the building is gone, Gabriel said. He adds, though, that there’s only one way to move from here: forward.