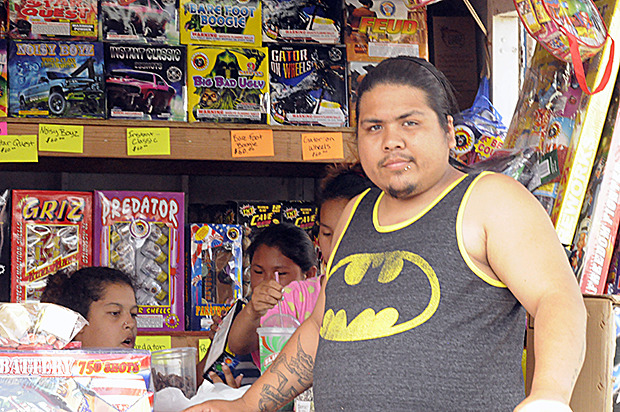 Sales of fireworks have already begun at Boom City on the Tulalip Reservation. Other fireworks stands will begin sales off the reservation starting June 28.
— image credit: Brandon Adam

While Arlington and Marysville encourage citizens to celebrate the Fourth of July, the cities’ police officers and firefighters want to make sure those who use fireworks do so safely and legally.

Native American reservations may sell fireworks that do not conform to those laws, but such fireworks must be detonated on reservation lands. The fireworks stands of “Boom City” on the Tulalip Tribal Reservation provide a lighting and detonation area on site for customers. Security personnel will monitor the area to ensure that children age 12 and younger have adults age 18 or older present.

Fireworks that are illegal off tribal lands include bottle rockets, skyrockets, missiles and firecrackers. M-80s and larger, as well as dynamite and any improvised, homemade or altered explosive devices, such as tennis balls, sparkler bombs or cherry bombs, are likewise illegal. Anyone who possesses or uses such illegal devices can expect to be charged with a felony.

State Fire Marshal Charles Duffy is reminding Washingtonians that the purchase of fireworks over the Internet is illegal. Fireworks must be purchased from a licensed retail fireworks stand during the legal sales period.

In its online list of tips to the public, the Arlington Fire Department noted that illegal fireworks are often unpackaged and wrapped in plain brown paper, and warned against purchasing any fireworks that are not in their original packages, or are in opened or damaged packages.

Under state law, possession or discharge of illegal fireworks is a misdemeanor punishable by a fine of up to $1,000, up to a year in jail and a mandatory court appearance.

He added that Marysville police plan to have more officers on duty during this year’s Fourth of July, and emphasized that the safety of individuals and property is of utmost concern. “We have seen too many instances elsewhere and over the years where celebrations quickly turned to tragedy for families, especially where children and teenagers are involved,” Lamoureux said.

Although Arlington Fire Deputy Chief Tom Cooper believes that Arlington police and fire personnel are more likely to try and educate those using illegal fireworks, he warned that they will likely be more proactive and visible in various neighborhoods that have experienced problems with fireworks before.

“As much as the Fourth of July is a patriotic holiday, there are more than a few veterans who have a hard time dealing with fireworks because of their experiences,” Cooper said. “If people limit their fireworks activities to the Fourth, it allows those folks, as well as those who own easily spooked pets, to make arrangements.”

Officials in both cities urge Fourth of July revelers to clean up their fireworks. “After you light it up, clean it up,” Buell said. “Discarded fireworks the days after the Fourth are a neighborhood and community eyesore, and smoldering fireworks can still pose a fire hazard if you don’t get rid of them properly.”

To dispose of spent fireworks properly, the Arlington Fire Department advises that people let their used fireworks lay on the ground until they are cool, and there is no chance that any residue will reignite, after which they should place all the expended firework cases in a bucket of water. Those who use fireworks should keep a bucket of water or a running water hose close by.

“We want people in our community to enjoy fireworks and the Fourth, but we want them to do so safely, which is why we’re encouraging them to attend public fireworks shows, like the one at the Arlington Boys & Girls Club,” Cooper said. “Those shows are professional, well-organized, safe and, at least in Arlington, free.”

Cooper cautioned against treating certain fireworks dismissively because of their size. “People tend to think that smaller fireworks are less dangerous,” Cooper said. “That’s how they get injured, from standing too close to those fireworks, or over them, or even by holding bottle rockets with their bare hands.”