With the influx of chum salmon last fall, the Port Gamble S’Klallam Tribe was able to take twice as many eggs as usual, up to 1.2 million.

In anticipation of the large run, natural resources director Paul McCollum brought in an idea from his time in fisheries in Alaska – a NOPAD incubator, a tower of six 4′ x 4′ x 15” aluminum trays that can accommodate up to 1.5 million eggs. 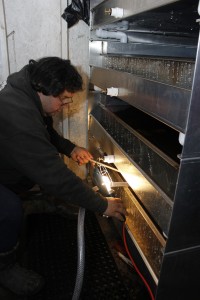 Little Boston Hatchery technician Jeff Fulton works with a tray of eggs in the new NOPAD incubator system. More photos can be found by clicking on this photo.

“The small tray incubation system, or Heath tray system, we have been using for decades can only hold up to 600,000 eggs in total,” McCollum said. “The NOPAD has only been around since the 1970s and is commonly used in Alaska. One of the NOPAD trays can hold 45 small Heath trays worth of eggs.”

The tribe is maxed out with the old system, McCollum said, so the NOPAD trays will help increase its chum production while using minimal additional water or floor space.

“Most of our chum will go into our raceways, as we’ve always done, but now we’ll have more to put in the net pens, which, in the end, will result in bigger fish at release.

“The survival rate is a little more beneficial with the NOPAD,” he added. “But our main focus is on increasing production for better returns.”