Olympia – Senate House Bill 2080, introduced to the Washington State Legislature after session in 2013, was passed this year by the House on February 13th and the Senate February 5th, which coincides with the 40th annum of the Boldt Decision which settled the Fish Wars. The bill allows tribal fishermen arrested while exercising their treaty fishing rights and convicted prior to January 1st, 1975, to apply to the sentencing court to vacate their convictions including misdemeanors, gross misdemeanors, and felonies. With this bill, the legislature acknowledges that no crimes were ever committed in these cases, making these convictions void.

Rep. David Sawyer, (D), whose district includes the Nisqually and Puyallup reservations, introduced SHB 2080 after session in 2013. That move gave legislators time to read the bill and engage with it, allowing it to move rather quickly through the House and Senate.

“It is an excellent bill, it writes a wrong for so many,” said Sen. John McCoy, (D). He was one of the point people for the bill as it moved through the Senate.

The language of the bill is just as important as the bill itself. It is not a pardon. It is a new law allowing Treaty Indian fishermen, who were wrongfully arrested and charged, to clear their name through vacation and expunction. To vacate the conviction means it has been rendered void by the court. To expunge means to remove completely from the record. Those two terms, from a legal stand point, make these convictions as if they never occurred, as opposed to a pardon which acknowledges the crime and validates a conviction, yet forgives the crime and sets sentencing aside.

“A crime was never committed, they [the convictions] should be expunged,” said McCoy, referring to the imposition of state law over Treaty Indian fishing.

McCoy noted, “This should have been done a long time ago.”

Through the passing of SHB 2080, the State of Washington realizes the sovereignty of tribes, acknowledging that they had no authority over what happened more than 40 years ago. This sets a precedent for Washington tribes, and for tribes across the nation. 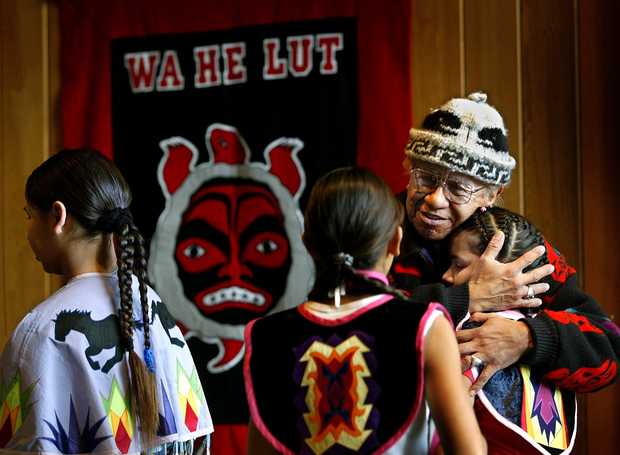 Criminal records of tribal fishermen could be cleared 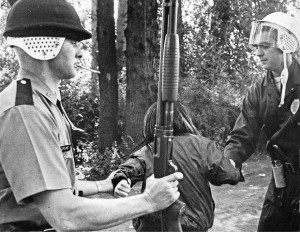 Police arrest a woman during a fishing rights confrontation on the Puyallup River on Sept. 9, 1970. Sixty-four adults and 10 children were arrested after police and state game agents broke up an encampment that had stood for several weeks. WAYNE ZIMMERMAN/STAFF FILE, 1970

The legislation itself might not help very many people.

A search of records by the Washington State Patrol shows that perhaps as few as 80 people still alive were arrested and convicted of state crimes related to what is now remembered as the Fish Wars.

“I was 14 years old when I first got arrested,” he told the House Community Development, Housing and Tribal Affairs Committee in Olympia on Tuesday. Frank was 14 in 1945.

The value of House Bill 2080, even for Frank, may be more symbolic than practical. By making it easier for tribal fishermen to have their records cleared, the state of Washington would be acknowledging not only that it was wrong but that it caused real harm to real people.

“This is small. This doesn’t do the times justice,” Rep. David Sawyer said of his bill. It does, however, give the state another opportunity to “own up to our own mistakes.”

“Very few things are more dear to the culture of a tribe as fishing. It is a huge part of their culture, and it’s something we stole from them,” Sawyer said.

That Sawyer, a liberal Democrat from Tacoma, would sponsor HB 2080 isn’t surprising. Some of the co-sponsors, however, might seem unexpected to those who recall the politics of the Fish Wars. Republicans and Democrats, conservatives and liberals, Western Washingtonians and Eastern Washingtonians are among the 15 sponsors of the bill.

History shows that tribal members bristled under state restrictions on their fishing rights almost from the beginning of statehood. But the issue heated up after World War II when younger tribal members became more assertive.

At the same time, fish supplies were strained by environmental degradation and overfishing, and the state became more aggressive in managing the fishery. Off reservation, tribal fishermen had to follow the same regulations as nontribal fishermen, the state asserted, including limited seasons and restrictions on equipment such as gill nets.

Building slowly, the issue exploded in the 1960s when tribal members adopted tactics practiced by the black civil rights movement. Whereas blacks in the South held sit-ins to protest segregated facilities, the tribes began to hold fish-ins. Authorities often responded with arrests and harassment.

And as in the South, mainstream media paid more attention when celebrities got involved. One in particular is still revered by Puget Sound tribes.

“The greater force against you was indifference rather than the people who were hitting you all the time,” actor Marlon Brando later wrote that he told the National Indian Youth Council in 1961. “Then if you could break that indifference you could get the mass of non-Indian people on your side.”

According to “Where The Salmon Run,” by Trova Heffernan, in attendance at that Utah conference was Hank Adams, who would soon be a leader in the tribal rights movement in the Puget Sound area. When Adams heard that Brando wanted to join a fishing protest in Washington, he saw it as a way to break through white indifference. At 2 a.m. on March 2, 1964, Adams roused reporters to tell them to be on the Puyallup River near Tacoma that very morning.

Brando and Puyallup activist Bob Satiacum got into a canoe and, at least according to a game agent, took salmon from the river illegally.

Here’s how Brando described it in his autobiography: “I got in a boat with a Native American and a … priest. Someone gave us a big salmon we were supposed to have taken out of the river illegally, and, sure enough, a game warden soon arrived and arrested us.”

According to Heffernan, the fish had been purchased earlier at Johnny’s Seafood. The spot on the river is still known as Brando’s Landing.

The most violent confrontation might have been along the Puyallup in September 1970. A large protest camp had been set up beneath a railroad bridge since Aug. 1. From there, tribal members continued to take fish despite state objections. After two raids mid month, the tribal leaders announced that they would arm themselves.

On the morning of Sept. 9, well-armed Tacoma police officers, along with state game and fisheries agents, broke up the camp, arresting 62 adults and 10 juveniles. Some shots were fired and tear gas was released, but there were no injuries.

The beginning of the end came in 1974 when U.S. District Court Judge George Boldt ruled that the treaties promising that the tribes could take salmon “in common” with white fisherman meant 50 percent of the catch. He also ended state restrictions on tribal fishermen. That ruling was upheld by the U.S. Supreme Court in 1979.

Frank said he lost track of how many times he was arrested, sometimes guessing at least 50 times between 1945 and Boldt’s ruling.

“That’s a long time of your life to be going to jail for something you believe in,” Frank said.