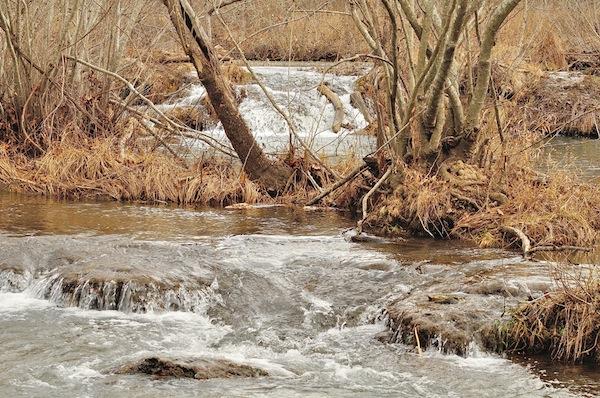 Nothing elevates the hope and heart rate of an angler more than hearing that first predawn “ZWIIINNGGG” of a casting reel as fishing line slices through the early morning air and the lure plops into the water.

Whether it’s the first or last day of the season, fishermen hope that  is a dinner bell ringing in the ears of their desired quarry.

The outdoor enthusiasts who pursue a multitude of game fish seeking refuge in coves, holes and brush in Oklahoma’s lakes and streams make a sound too: The cash register’s “cha-CHING” can be heard with predictable regularity.

With more than 700,000 anglers using the many public lakes, ponds and streams within Oklahoma each year, work is underway to guarantee the state’s natural fish resources will exist for generations to come. These efforts incorporate fish hatcheries located throughout the state, including the Tishomingo National Fish Hatchery.

The national hatchery was established in 1929 on lands purchased from Native Americans. Located less than 15 minutes from the city of Tishomingo, it has been named in honor of Chickasaw Chief Tishomingo—one of the tribe’s most celebrated leaders.

Hatcheries play a major role in preserving imperiled species and provide millions of fish for recreational purposes. The Tishomingo National Fish Hatchery is one of only 70 fish hatcheries managed by the U.S. Fish and Wildlife Service. Each hatchery is unique, but all work to protect and conserve fish populations within the United States.

“Our hatchery is different from most for a couple of reasons,” biologist Brian Fillmore said. “While we do raise recreational fish, national hatcheries focus on threatened, endangered and species of special interest. Included are paddlefish and alligator snapping turtles, a non-fish species. Also, the water we use is gravity fed to our ponds, so we don’t have the added cost and headache of large water pumps.”

The hatchery sits on the banks of historic Pennington Creek in Johnston County. The location is a natural choice for the hatchery. Pennington Creek has a continuous flow of water provided by the Arbuckle Simpson Aquifer. The hatchery relies on the aquifer to provide clean, cool and pristine water, even during extreme drought. The creek flows through the heart of Chickasaw lands, making its way through the historic capital of the Chickasaw Nation, Tishomingo. The water is cleaned through natural processes once used by the hatchery.

“The hatchery is careful with the water we use and the local environment,” Fillmore said. “Once used, the water flows through an affluent that catches solid particles within it. The water released is tested by the state. It is as clean and pure as when it first arrives. We also take steps to make sure fish not native to Pennington Creek don’t get loose.”

According to the U.S. Fish and Wildlife Service, the hatchery is bordered by 3,400 acres in a conservation easement on the north that protects Pennington Creek and other area watersheds.

With more than 50 ponds located on 235 acres and a staff of eight full-time employees, the hatchery breeds many types of fish. They include the prehistoric paddlefish, catfish, alligator gar and alligator snapping turtle. The hatchery has a captive breeding and rearing program for threatened and endangered populations, including the Arkansas River shiner, which resembles a minnow.

“We are always trying new ways to raise fish, as well as different kinds of aquatic animals,” Fillmore said. “We are developing programs for the endangered Arkansas river shiner and leopard darter. We also raise alligator snapping turtles, a species most people would not think to be raised at a hatchery.”

Vital information is collected at the hatchery for protecting and managing the diverse types of wildlife found in the Arkansas and Red River basins. Both flow into the Mississippi River, which runs through the historic Homeland of the Chickasaw.

The hatchery visitor center is open to the public year-round. Aquariums, photographic exhibits, aquatic ecosystems and a display pool with various types of fish are present at the hatchery. For the adventurous, a scenic area with fishing access and a hiking trail is available. The trail was constructed by the Boy Scouts of America and the Chickasaw Youth Program.

Children from 6-12 years of age can participate in the annual Kids Fishing Derby at the Tishomingo National Fish Hatchery during National Fishing Week in June. Popular among visitors is the historic gristmill water wheel maintained by the hatchery. Visitors may enjoy watching it operate on the banks of Pennington Creek while touring the hatchery grounds.

“In the 1930s, there used to be an amusement park of sorts adjacent to the hatchery,” Fillmore said. “Near the water wheel was a miniature golf course, surround by outbuildings. The only thing left from that time is the grist wheel. We keep it maintained for its historical value.”

Guided tours are available from 8 a.m. to 2:30 p.m. Monday through Friday, except federal holidays. For large groups, call ahead as weather and scheduled job duties can affect availability of hatchery staff. For more information, contact the Tishomingo National Fish Hatchery at (580) 384-5463 or read about the hatchery at the Fish and Wildlife Service page devoted to it.

SEATTLE — Commercial and tribal fishermen in Washington state could be getting federal help after the closure of the Fraser River sockeye salmon fishery last year cost them millions of dollars.

U.S. Commerce Secretary Penny Pritzker issued a disaster declaration for the fishery Tuesday. That allows Congress to send money to the affected communities.

The Fraser River flows from the Canadian Rockies into the Strait of Georgia at Vancouver, British Columbia. Low returns of sockeye to the river prompted the closure.

Several Washington tribes, including the Lummis, Nooksacks and Tulalips, fish for sockeye. They and the state’s nontribal, commercial fishermen typically bring in a collective $4.1 million per year from sockeye. The Commerce Department says last year, the total was just $115,000.

Pritzker said that if Congress appropriates money, the National Oceanic and Atmospheric Administration will work closely with Congress, the tribes and the state to distribute it.