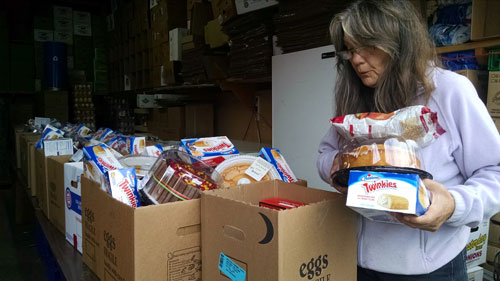 Tamara Morden makes last minute checks to boxes that will be given to families in need.
Photo/ Brandi N. Montreuil, Tulalip News

By Brandi N. Montreuil, Tulalip News
TULALIP – Tulalip Church of God, known locally as the ‘red church,’ helps families in the Tulalip and Snohomish County area supplement their dietary needs. The food bank  hands out donations to nearly 400 families every second and fourth Tuesday of each month, says volunteer and organizer, Tamara Morden, who explains that families must provide an address of residence to receive donations.
Local businesses such as Safeway, Winco and Northwest Harvest donate much needed supplies and are the food bank’s main source of food supply. Morden, who works a full-time regular job says she volunteers 20 hours a month to pick up, pack, and organize donations.
“Everyone is welcome who needs it. We don’t turn people away,” said Morden.
The food bank is open every second and fourth Tuesday of each month from 10:30 a.m. to 4:00 p.m. Volunteers are always welcome.Tulalip Church of God is located at 1330 Marine Drive NE, Tulalip, WA 98271 and can be reached at 360-653-7876. 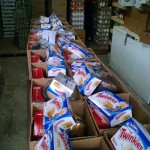 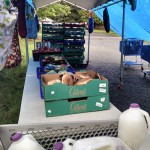 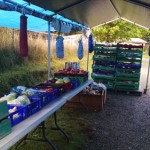 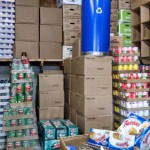 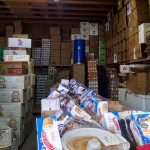 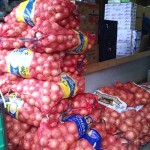 ARLINGTON — An unexpected Christmas present arrived early this year to three local food banks: $100,000 in cash, a donation from The Stillaguamish Tribe of Indians.

Sue Keezer, board chair of the Arlington Community Food Bank, said the charity had put in a request for a $25,000 grant this year from the tribe. The tribe has always been a strong supporter of the food bank, she said, and this has been a tough year both in a reduced amount of donations and an increase in need.

She went to pick up the gaily wrapped check Saturday morning. When she took off the wrapping, however, she was shocked.

Eric White, vice chairman of the Stillaguamish Tribal Council, said the tribe broke with its usual giving pattern this year to present an early gift to the three food banks, which included the Stanwood/Camano Island Food Bank and Northwest Harvest.

White said the tribe was motivated not just by general holiday spirit but also from hearing about a lot of people in need. While the tribe has supported the Arlington food bank in the past, they reached out to the other charities as well to help more people with their $300,000 gift.

“In our community, we have a lot of tribal members that live in Stanwood, so we reached out to Stanwood,” White said.

“When we get $5,000, that’s big news,” Bentley said. “One hundred thousand dollars is almost beyond comprehension.”

The Stillaguamish Tribe typically receives applications for charitable donations through the end of December, with donations given out in January. A second round of donations goes out in July. The tribe donated approximately $3 million to various charities in 2012, White said.

“Without their donations last year and this year we wouldn’t have had enough turkeys for our Thanksgiving baskets,” she said.

“This community has never let down this food bank,” she said.

Keezer said some of the money will help get through the holiday season and complete construction of a new permanent facility at 19118 63rd Ave. NE. The food bank is renting space owned by the Arlington airport.

ARLINGTON — Two north Snohomish County cities are trying to curb panhandling by asking people to give to local charities instead.

Arlington and Marysville officials are working with local businesses to post signs and window stickers as part of a new campaign called “Keep The Change.”

“It’s okay to say no, just a simple no,” Arlington Police Chief Nelson Beazley said. “This community is tremendous so far as being a giving, caring community, but give appropriately.”

Beazley sees a link between the rise in panhandling problems and heroin use. Not all panhandlers are addicts, but those who are cause trouble, he said.

Panhandlers are creating traffic and safety concerns in Marysville as well, Mayor Jon Nehring said. Some are using their income — up to $90 a day — to buy drugs and alcohol, he said. They’re often seeking handouts a short walk from the local food bank.

“There are places to give the money where it will truly help the needy,” Nehring said. “What we’re trying to do is essentially stop the subsidization of the drug and alcohol habits for some of these folks who stand out there.”Nehring’s office received complaints from parents who said they were approached in parking lots while loading their cars up with kids and groceries, he said. In Smokey Point, young families reported similar issues outside a dance studio.

“Keep The Change” started in Marysville after local barber Kelly Muma learned of an initiative in southwest Washington. Muma and his wife own HotRod Barber Shop on State Avenue.

“I’ve been cutting the mayor’s hair since way before he became mayor,” Muma said.

They got to talking about the panhandling problem.”The community is so giving, but yet unfortunately we’re giving to the wrong people,” Muma said. “This is truly what this sign is about. Those who truly need the help know of the food bank, know of the centers to go to. It’s educating the general public.”

Police officers are limited in what they can do about panhandling, Beazley said. In most cases, the activity isn’t illegal unless it’s deemed aggressive or it becomes trespassing. An arrest or citation doesn’t always lead to a prosecution.

One of the downtown Arlington business owners who supported the campaign was Jeanne Watanabe, of The Silver Hanger consignment shop on N. Olympic Avenue. Business owners have been working closely with the police department since seeing an increase in illegal activity downtown, she said.

“We wanted to find out why it was occurring and what we could do about both helping people on the street and making sure the street stayed safe. It’s definitely two-fold,” she said. “Our community is amazingly rich with people who have a heart for helping people who are homeless. We have lots and lots of programs for that.”

Arlington has 10 “Keep The Change” signs posted in the Smokey Point and downtown shopping areas and about 100 window stickers have been distributed, said Paul Ellis, the city’s community and economic development director. More signs are planned.

Earlier this year, the Washington State Patrol also asked folks not to give to panhandlers at freeway ramps, citing concerns about traffic safety and pedestrian deaths. That message is ongoing, trooper Mark Francis said.

“Panhandlers are at even greater risk on I-5 on- and off-ramps due to the higher speeds,” he said. “We are citing panhandlers and arresting re-offenders on limited-access highways.”

You can research charities at the Secretary of State’s website, www.sos.wa.gov/charities/search.aspx, and at the state Attorney General’s website, www.atg.wa.gov/SafeguardingConsumers.aspx, under “Consumer Issues A-Z.” 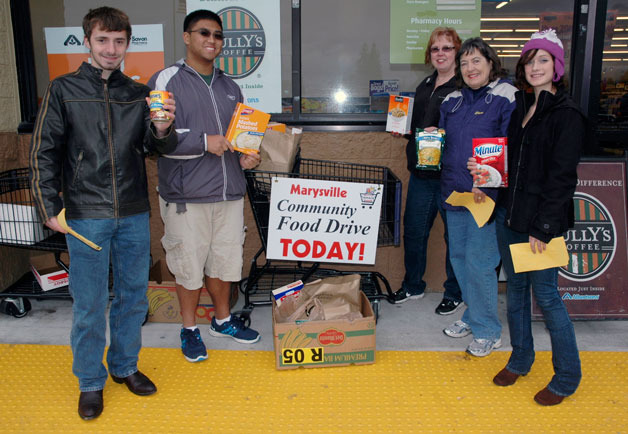 MARYSVILLE — With the holidays just around the corner, volunteers from several organizations will kick off the Marysville All-City Food Drive on Saturday, Nov. 2, from 9 a.m. to 3 p.m., to help neighbors in need this season by collecting donations of money, food and unused toys.

“You can make a real difference in lives of children and families, knowing that your donations and gifts will go directly to families in the community,” Marysville Community Food Bank Director Dell Deierling said.

Year-to-date food and financial donations are down, while the number of families coming to the Food Bank is up 6 percent, making the need all the more real.

Volunteers will be collecting donations at the Marysville Fred Meyer, Grocery Outlet, Haggen, Albertsons, Walmart in Quil Ceda Village and east Marysville, and the Safeway stores in Marysville and Smokey Point.

Red barrels will be located throughout the Marysville community starting Nov. 2, and will continue to collect food and toys throughout the holiday season.

Donations can also be dropped off at the Marysville Community Food Bank, located at 4150 88th St. NE, behind St. Mary’s Catholic Church.

For more information about the All-City Food Drive, contact Tara Mizell by phone at 360-363-8404, or via email at tmizell@marysvillewa.gov. 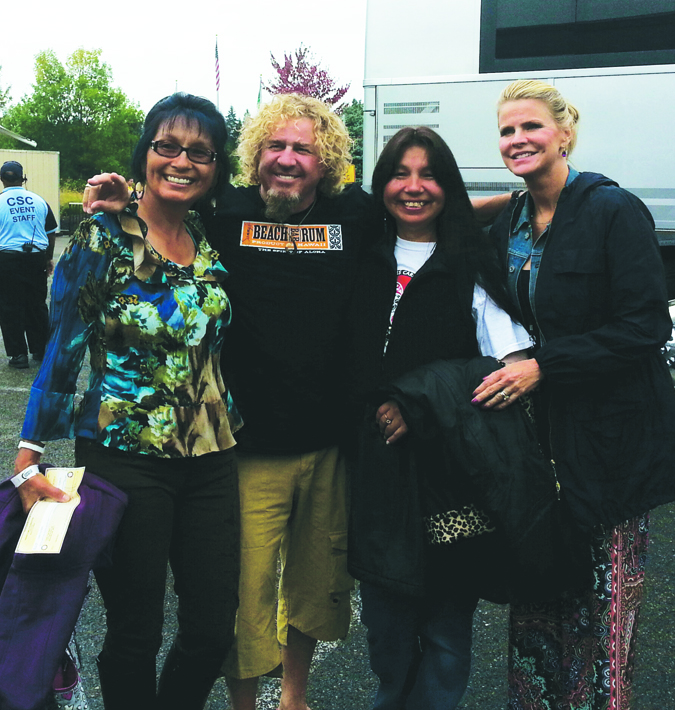 Sammy Hagar performed before a packed house at the Tulalip Resort Casino Amphitheatre on August 15th, for his 40 Years of Rock tour.  Along with the high-energy rock n’ roll Sammy is famous for, what make the Red Rocker’s performances even more memorable are the donations he makes to local food banks in each community he visits. As part of this ongoing support of local food banks, Sammy chose to donate $2,500 towards the Tulalip Food Bank.

“Food banks in your local community are the biggest bang for your buck in my search for the simplest and most reliable way to help others,” Hagar said in a recent Billboard article. “You see the clientele lined up and they need it. You don’t see people taking advantage of something.”
A multi-platinum, outgoing, bombastic front man of hard rock champions Van Halen, Hagar is a member in good standing of the Rock and Roll Hall of Fame. He will be releasing his first solo album in five years on September 24, 2013.  Hagar has enlisted three legendary musicians – Toby Keith, Mickey Hart and Taj Mahal – to round out the final three tracks of the album to be titled: “Sammy Hagar and Friends.” 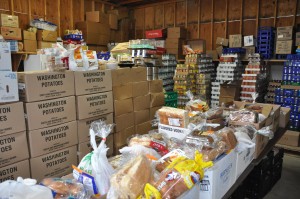 The many food donations recently received being boxed ready to go.

Volunteers at the Tulalip Church of God food bank are happy to say that they help feed families of Snohomish County. Food bank volunteer Tamara Morden says, “We help feed about 150 -200 families every two weeks, so about 400 a month”. The food bank receives regular donations from people in the community and local businesses such as Safeway, Winco, and Northwest Harvest. While they did very well with donations this last, they received extra donations from First Nation Ministry of Portland of 2,000 lbs. of potatoes and two palettes of juice. And they are always in need of more donations of non-perishable foods.

The food bank has been in operation for seventeen years and was started by Marge Williams in order to serve the community west of Interstate 5. Once the food bank began receiving donations from Northwest Harvest they became available to all residents of Snohomish County.

Tamara has lived on the Tulalip Reservation since she was born. She began attending the Church of God in her youth and eventually began volunteering her time at the food bank. With the help of volunteers Tamara manages to keep the food bank going and while working a full-time job. 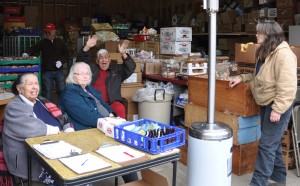 “Louie Pablo picks up supplies and I’m very, very grateful for him doing that,” Tamara says. W. Jake Price is her biggest help; Jake has been helping at the Food Bank since Marge ran it, “He’s always here every day of donations,” explains Tamara.

If you would like to help, stop by the Tulalip Church of God (the red church) on the second or fourth Mondays and Tuesdays of each month to volunteer.