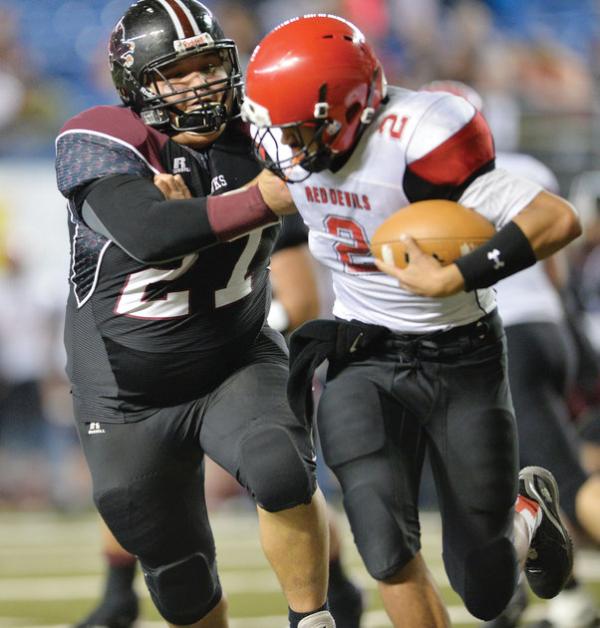 Neah Bay High School and Lummi Nation High School are rival Native high schools in Washington State. But they have a few more things in common.

Neah Bay won the Washington State 1A Football Championship this fall for the second time in three years; Lummi Nation won it in 2010, and has made it to State several years in a row.

Lummi High has about 100 students and Neah Bay Jr./Sr. High has about 168 and because of these small enrollment numbers, 8-man football is preferred for these rival schools over the traditional version of that varsity sport.

“There is no difference as far as the rules,” said Lummi Nation Head Coach Jim Sandusky. “There are three less guys on the field, so instead of seven guys on the line, you have to have at least five. That’s pretty much it.”

Lummi Nation is a tribal school located just a few miles from the Canadian line. Neah Bay, a state school, is located on the northwestern tip of Washington. Both football teams came into prominence in recent years and their proximity to each other has created a friendly rivalry.

And arguably, the success at each school can be traced back to the two coaches: Tony McCaulley at Neah Bay and Sandusky at Lummi Nation.

Sandusky, a Colville descendent, coached Ferndale youth football. He built a football field on his own property because there was no place for the football players to practice. His son Rocky was on the youth team that he coached, as well as Jake Locker, now quarterback for the Tennessee Titans in the NFL.

In 2003, Sandusky was hired as Lummi’s coach and athletic director. That year, they went 4-5 and missed the playoffs in the last game of the season. “Ever since [2004], we’ve made it,” said Sandusky, explaining that the team has made it to the playoffs every year since then.

McCaulley’s coaching career was somewhat  similar to Sandusky’s. His son Ty started youth football and McCaulley coached him. He coached and played at Clallam Bay, a rival school just down the road from Neah Bay. He’s been coaching Red Devils for six years.

“We’ve been to the state semi-finals five of the six years. The worst year I had [was when] we lost in the state quarter-finals,” McCaulley said. But, Neah Bay was dominant this year. “We were undefeated and blew a lot of teams out,” McCaulley said.

Many of the Red Devils players have played together since eighth grade and all but one of the 39 players are Makah tribal members. Two players in particular are looking to play college football next year. One is the coach’s son, Ty, who plays fullback and the other is Josiah Greene, the quarterback.

At Lummi, only a few players have been on that team since 8th grade. “Dean Hoskins started for me ever since he was an 8th grader,” Sandusky said. “He just got All-State selection along with two other of our kids.”

Note the similarities: Each community had youth football programs with fathers coaching the kids. Sandusky and McCaulley were then hired by the schools to coach high school football. Since those two coaches have taken over, each program has had rather remarkable success: high ratios of wins to losses, and state championship wins with teams made up almost entirely of Native American players.

If Jake Locker can make it to the pros, then why not Ty or Josiah or Dean or Rocky or one of the other outstanding 8-man Native American high school football players.