A lawyer has convinced a Paris judge to hold a hearing Thursday to determine the legality of a sale of sacred Hopi Indian artifacts by the Néret-Minet auction house that is scheduled for Friday.

The lawyer from Skadden, Arps, Slate, Meagher & Flom, Pierre Servan-Schreiber, said he was acting in a pro bono capacity after having been contacted by Survival International, a global nonprofit organization that advocates on behalf of native tribes.

Mr. Servan-Schreiber said he told the judge that the items should not be sold until it can be determined whether they were stolen from Hopi lands, as the Arizona-based tribe believes, or were the objects of sales that violated American and international law.

Efforts to look into the history of the 70 items, he said, would be rendered “virtually impossible” once they were scattered among multiple buyers. He said a delay would “preserve evidence.”

Mr. Servan-Schreiber also argued that the sale is illegal under an old prohibition in French law that bars the sale of “non-commercial” things that are seen as “immoral to sell.” The Hopis say the artifacts, ceremonial masks and headdresses known as Katsinam, or “friends,” embody divine spirits and are purely religious. They say selling them is a sacrilege.

A spokeswoman for the auction house said it was aware of the ruling but she would not comment further. Gilles Néret-Minet, the director of the house, has said repeatedly that he will not delay the $1 million sale. He has said the collector who put the items up for sale obtained them all legally.

The United States Embassy in Paris has also asked the auctioneers to delay the sale “given the ancestry of these masks and the distance between Paris and the Hopi reservation.”

“Plans to auction the dramatic facial representations on April 12 spawned a protest from the Hopi Cultural Preservation Office and calls for the French government to intercede.” 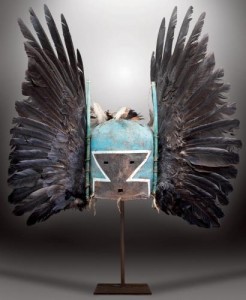 The Heard Museum and the Museum of Northern Arizona have joined Hopi cultural officials in urging a French auction house to cancel the planned sale this month of about 70 ceremonial kachina faces, known to tribal members as “friends.”

In Hopi theology, kachinas are supernatural messengers depicted in fantastical costumes worn during religious ceremonies. There are several hundred spirit characters in the pantheon representing wildlife, plants, human qualities, weather and other facets of nature or society.

Plans to auction the dramatic facial representations on April 12 spawned a protest from the Hopi Cultural Preservation Office and calls for the French government to intercede.

The Museum of Northern Arizona’s director, Robert Breunig, posted a letter Friday to the Paris auction house on Facebook, urging that the iconic, masklike visages be returned to Hopis of Arizona and the related New Mexico pueblos of Acoma, Zuni and Jemez.

“I can tell you from personal knowledge that the proposed sale of these katsina friends, and the international exposure of them, is causing outrage, sadness and stress among members of the affected tribes,” Breunig wrote. “For them, katsina friends are living beings. … To be displayed disembodied in your catalog, and on the Internet, is sacrilegious and offensive.”

The Heard Museum also posted a message on Facebook, which was e-mailed to the auctioneers in Paris: “This sale of items of significant religious and cultural importance to the Hopi Tribe is of extreme concern to our American Indian employees, particularly our Hopi employees.”

One of the “Hopi masques” has a listed value of up to $64,000. Officials at the firm did not respond to e-mail or phone messages.

Last month, Hopi Cultural Preservation Office Director Leigh Kuwanwisiwma released a statement opposing the auction and asking Neret-Minet to “begin respectful discussions to return them back to the tribe.”

Kuwanwisiwma did not respond to an interview request, but a tribal representative said he received no response from Neret-Minet.

Sam Tenakhongva, Katsina Clan leader for the Hopi village of First Mesa, declined to be quoted unless The Arizona Republic agreed to prior censorship of stories about the controversy.

Micah Loma’omvaya, chief of staff to Hopi Chairman LeRoy Shingoitewa, said his boss and the Tribal Council have yet to address the matter.

The Hopi religion is so secretive, and the kachina spirit figures’ roles so crucial, that tribal officials oppose publication of photographs. They also object to the word “mask” as a description of the supernatural caricatures worn by Hopi men during ceremonies.

That cultural sensitivity may be confusing, however, because Hopi artisans commercially produce and sell thousands of wooden effigies depicting the same spiritual entities. In fact, a Katsina Doll Marketplace scheduled April 13 at the Heard Museum in Phoenix boasts 100 artisans and is touted as “the nation’s largest gathering of Hopi katsina doll carvers.”

According to a Neret-Minet catalog, the collection in Paris was assembled by “a connoisseur with peerless tastes” who lived in the United States for three decades and spent time with the tribe.

“By his own admission, you have to see the masks in dances to fully appreciate them,” the text says. “The art and history of the Hopi are intimately linked.”

Objects that date from the late 19th and early 20th centuries are made from leather, fur, plants, feathers and other natural materials. They depict benevolent characters such as Crow Mother (Angwusnasomtaqa), the matron of all kachinas, and Mud Head Clown (Kooyemsi), who is “both the supreme mediator between good and evil and an insolent buffoon prone to scatological pranks.”

Jose Villarreal, editor and publisher at artdaily.org, which announced the auction, said he has been bombarded with e-mail complaints from Hopis who are “very mad.” Villarreal said he contacted the Neret-Minet and was informed that the sale will go as planned because the kachina art was legally obtained.

Marketing materials do not explain when or how the religious artworks were acquired. In past U.S. cases, some works have been secretly sold to collectors for a profit by tribal members.

The Hopi Cultural Preservation Office statement says, “It is our position that these sacred objects should never have left the jurisdiction of the Hopi Tribe. … No one, other than a Hopi tribal member, has a right to possess these ceremonial objects.”

The Native American Graves Protection and Repatriation Act of 1990 established a process for Indian tribes to reclaim funerary and sacred items within the U.S., but it carries no international authority.

The Heard Museum statement says France adopted provisions of the U.N. Declaration on the Rights of Indigenous Peoples and therefore should “take steps to return these ceremonial objects.”

In his letter to the auction house, Breunig noted that kachinas represent “a connection between the human world and the spirits of all living things and the ancestors” for tribal members. “I appeal to your sense of decency and humanity and request that you terminate the auction,” he added.

Numerous Hopis joined discussions of the controversy on museum Facebook pages, expressing outrage at the planned auction and at those who may have betrayed the tribe in the past by selling religious artifacts.