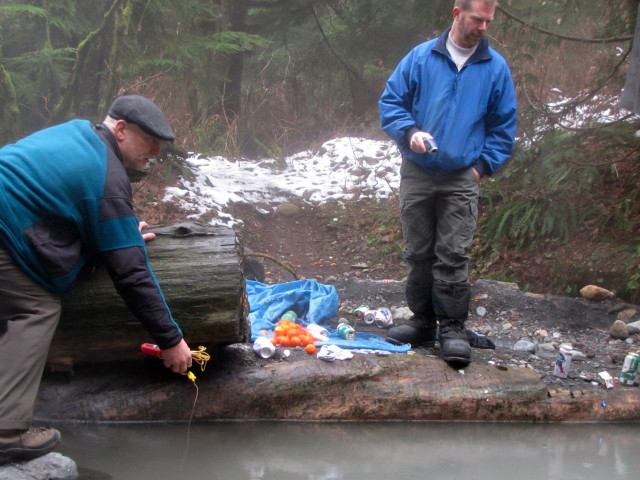 Geologists Dave Tucker (left) and Pete Stelling (right) at the Mount Baker hot springs in Washington’s Cascade Mountains. The Forest Service says the springs will not be disturbed, but they are within the large tract of federal land that could one day be open for geothermal development.
Ashley Ahearn

The volcanic ridges of the Cascades have long been poked and prodded by people who want to know what kind of geothermal energy they’ll find beneath the surface.

But many of the Northwest’s hot spots are on public lands. And in some cases, federal land managers have prevented access by companies seeking to convert that magmatic force into clean electricity.

That could soon change. The U.S. Forest Service is pursuing plans to make more than 80,000 acres in Washington’s Mt. Baker/Snoqualmie National Forest available for lease to energy companies. A final decision on that is expected as early as this month.

Companies wanting to develop geothermal power on federal lands would then undergo a full environmental review for each proposed project. Those studies would take into account the potential seismic risk,  vehicle traffic and transmission lines that could be associated with a geothermal power plant.

The development of geothermal power is under way in some parts of the Northwest, which the industry regards as a new frontier. Within that clean-energy frontier, Mount Baker is an outpost sentinel on its northern edge. Its steaming crater and the hot springs on the mountain’s eastern flanks are drawing attention from would-be geothermal developers.

Using steam from deep beneath the earth’s surface to spin turbines and generate electricity is not a new idea. But as more and more renewable energy comes on line, geothermal delivers in a way that intermittent sources like wind and solar do not: it provides a consistent source of what industry insiders call “baseload” power. That’s appealing to utilities like Snohomish PUD.

“A baseload renewable resource is something to treasure. We view it as a very attractive possibility,” said Adam Lewis with the Snohomish Public Utility District. The district has spent $5 million researching geothermal developments in Washington and is interested in building a traditional geothermal plant in the Mt. Baker/Snoqualmie National Forest to power roughly 20,000 homes.

The Forest Service’s move has raised concerns about negative impacts on natural ecosystems. Fifteen conservation groups have submitted a joint lettercommenting on the service’s proposed lease.

“We should be looking at everything but is this really where we need to be looking and if we are, we need to be real careful going up into wild rivers or intact forests,” said Tom Uniack, Conservation Director for Washington Wild.

The groups pushed for stronger protections on rivers and roadless sections of the forest, as well as certain forested areas that provide old growth habitat for northern spotted owls and marbled murrelets — two bird species that are protected under the Endangered Species Act.

How big is the Northwest’s geothermal potential?

California leads the world in geothermal power generation. Development has also grown in Nevada and Utah, but the Northwest lags behind.

Despite the region’s iconic volcanoes that rise up from the Cascade Range through Oregon and Washington, the geothermal potential in the region varies greatly. In Washington, hot spots appear to be limited to areas immediately surrounding volcanoes like Rainier and Baker.

Less than 5% of the total hydrothermal heat discharge from the Cascades occurs north of latitude 45N, according to research from the US Geological Survey.  USGS

Research from the U.S. Geological Survey shows extensive hydrothermal heat discharge in large stretches of the Cascades in Oregon, an indication of geothermal potential, particularly in the state’s southern and eastern stretches. But those heat signatures drop off as you head north of Mount Jefferson and the Three Sisters peaks.

In Washington, the places that could provide geothermal power appear to be even scarcer. Steve Ingebritsen, a geologist with USGS, found that less than 5 percent of the total hydrothermal heat discharge from the Cascades occurs north of the Oregon/Washington border.

“Maybe that’s because the high rainfall and snowfall and snowmelt and fractures near the surface are allowing the water to percolate down and mask the geothermal indicators we’d be looking for,” said Pete Stelling, a geology professor at Western Washington University in Bellingham. “But we don’t really know. We’re still on the hunt right now.”

The Washington Department of Natural Resources has analyzed temperatures in more than 450 wells around the state and found similar results.

But that doesn’t mean it’s game over in the pursuit of geothermal energy in the Evergreen State.

“Although the geothermal potential of Washington is lower than other West Coast states, such as Nevada, Oregon and California, there are still areas of relatively moderate to high potential,” said Dave Norman, state geologist with DNR.

The DNR sampling highlighted hot spots at Mount Baker and the Wind River area as the best places for further geothermal exploration in Washington. (You can look at their mapped well data here.)  There are currently no geothermal electricity generating plants in operation in the state.

In Oregon, geothermal energy provides heat for the city of Klamath Falls but geothermal electrification plants are still few and far between, despite a more extensive geothermal resource than that of Washington. There are two plants in operation – a small one in Klamath Falls at the Oregon Institute of Technology and another 30.1MW facility in Malheur County, which borders Idaho and Nevada.

Seattle-based company, AltaRock is piloting new hydroshearing geothermal technology at the Newberry Crater in Central Oregon, where the Forest Service has already issued a 53,000 acre lease in the Deschutes National Forest.

A scene at Mount Baker Hot Springs, where litter and personal belongings can be found scattered on the ground. Ashley Ahearn

Retreating to nature vs. harnessing nature

“104.1, 104.3,” Tucker reads temperatures (in degrees Fahrenheit) off his sensor. A broken bottle crunches under his boot. “It’s not, certainly you wouldn’t generate any power from this thing but it’s an indicator that hot water can reach the surface here.”

The springs are within the area of national forest currently under consideration for potential geothermal leasing, though the Forest Service says that any development near the springs would undergo a comprehensive review and the springs would not be disturbed.

The faint rotten egg smell and warm surface temperatures in this pool are enough to interest energy companies and utilities in exploring this area further.

A few hundred yards up the hill from where the geologists scrutinize mineral deposits and algae growth around the murky pool, a tent peeps out of the trees. Four college students groggily make breakfast on their camp stove.

“Does anyone want bacon?” asks Nathan Sundyne, a student at Western Washington University.

Samantha Miller sits in a camp chair nearby.

Samantha Miller and Paul Bikis, students at Western Washington University, enjoy the Mt. Baker hot springs. “I think it’s cool the idea of harnessing natural energy,” Miller said, “but if it really compromises the integrity of the area that would be kind of sad.” Ashley Ahearn

“I think it’s cool, the idea of harnessing natural energy like that,” she says.  “But if it really compromises the integrity of the area that would be kind of sad.”

“Do we destroy the habitat we have, that we get to sit around and enjoy, for energy for more houses and development – growth for the sake of growth?” Paul Bikis, a fellow student asks. “Or do we want to preserve the places that we cherish?”

As Tucker and Stelling hike out of the hot springs area, Stelling pauses to pick up a discarded beer bottle.

“People say ‘no [geothermal development] –  it’s so pretty here,’ and then they leave this mess around,” Stelling said, frustration in his voice. He acknowledges that harnessing geothermal power does come with some local environmental impacts, but he says that we can no longer afford to be “hamstrung” by the “not in my backyard” approach to new clean energy projects.