One of the firefighting teams trying to contain the Rim Fire in and around Yosemite National Park is the Geronimo Hotshots team from San Carlos, Ariz., one of seven elite Native American firefighting crews in the U.S.

On the San Carlos Apache Indian Reservation, firefighting jobs are one of only a few ways for many young men to earn a living. For team member Jose Alvarez Santi Jr., 25, the work is rewarding — but being away from home fighting fires can be tough.

“I don’t really see it as a job. Being out away from my family — that’s the part that I’m down about, is just being away,” Santi said not long before the team got the call to fight the Rim Fire.

Santi has a 3-year-old son. He’s only seen him for a dozen or so days this entire spring and summer. The 20-member crew works a fire for 14 days, then it’s a long trip home for maybe one or two days of rest, then back out again. This late in the season you can see this is starting to take its toll on a lot of the guys. But they know it’s also good money. In a good year, you could make $40,000. That goes far here. 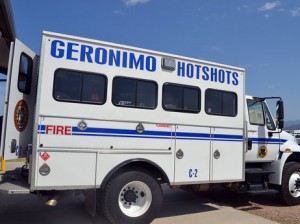 The Geronimo Hotshots are one of seven elite Native American firefighting crews in the country.
Kirk Siegler/NPR

“Of course the wife’s lovin’ it,” said senior firefighter Tom Patton. “Right now, just can’t wait to get out of here. I wanna go on another fire. It’s our only means of supporting our family.”

As on most reservations, jobs are hard to come by, and most families live well below the poverty line. There are a few jobs with the tribal government or at the small casino on the outskirts of the reservation. But much of the community is dependent on the fire season.

The only restaurant in town is the San Carlos Cafe. It’s in a worn stone building built by the U.S. government at the turn of the 20th century. The menu on the wall features the hot shot breakfast burrito. The owner, Jo Lazo, says the firefighters are looked up to here.

“I like to say our Apache men are the strongest of all firefighters. I think it just goes down through genealogy and the struggle that we had many, many years ago. We never go down without a fight,” she says.

Lazo is proud and pragmatic. The Hotshot crew members are regulars here, and that’s good for business. But the tribe and the Bureau of Indian Affairs also employ hundreds more seasonal firefighters. During a big fire year, everyone has more money in his or her pocket, including Lazo. Her cafe caters all the meals for the crews if there’s a wildfire near here.

“And it’s sad when there is a fire because we do lose a lot of vegetation, but it’s essential and it’s been essential for years,” Lazo says.

It’s hard to find someone around San Carlos who doesn’t have a father or brother or sister who’s a wildland firefighter. In fact, by late last week, the town seemed almost empty of anyone between 18 and 35.

“Yeah, right now everybody’s out on the fire. They’re up in Idaho, up in Oregon, up in Washington,” says Frank Rolling Thunder. He has fought fires since the ’70s. He says for a lot of people here, firefighting isn’t just good money — it’s a ticket off this isolated reservation. And opportunities like those don’t come along that often.

“First time we went out to Yosemite National Park … there were sequoias and I’d never seen them,” Rolling Thunder says. “It gives me the opportunity to go see all kinds of different places — the Cascades, Mount Shasta, Mount Hood.”

The team had only a short two days of R&R before getting the call to go to Yosemite. As word spread from man to man at the tribal forestry office, the buzz in the room changed. A little anxiety was added to the anticipation. A few guys drifted away to make last minute phone calls. A couple more moved their motorcycles into the garage. They’ll be gone for a while.

“Right now’s the time where everybody kinda double checks, makes sure they got everything they need, make their last calls to their family,” Santi says.

For Santi, this is the moment when it becomes clear what it means to be a Geronimo Hotshot. “I hold the name up high. Wherever I go, my family, they’re proud of what I do,” he says.

Santi says it’s not just about fighting fire or saving people’s homes. It’s about representing his people off the reservation. He says the crew meets a lot of people who have never heard of the San Carlos Apaches or their history.

“We come from a people that were pushed around, shoved into reservations, and to me, I want our people to show that we can do a lot of things other than being pushed around and shoved around,” he says. “It’s a good feeling.”

The white trucks with blue letters spelling out Geronimo are all packed. No more time to talk. Ten men to each “buggy” as they call them. They’ll drive through the night to California and then it’s on to the front lines of the Rim Fire.