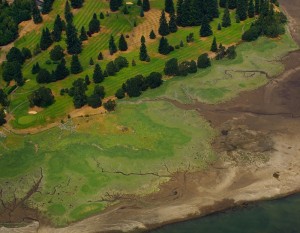 Photo by the state Department of Ecology.

The Capital Land Trust and the Squaxin Island Tribe are working to bring back salmon habitat and protect an important shellfish growing area by restoring a former golf course on Oakland Bay. The land trust recently purchased the 74-acre Bayshore Golf Course, which includes the mouth of Johns Creek and over a thousand feet of Oakland Bay shoreline.

The tribe and the land trust will remove a 1,400 foot dike, restoring the Johns Creek estuary and important marine shoreline. “Taking the dike out will provide salmon with additional acres of saltwater marsh to use as they migrate out to the ocean,” said Jeff Dickison, assistant natural resources director for the tribe..

Eventually, the golf course fairways will also be replanted with native vegetation, restoring a streamside forest that helps provide habitat to salmon.

The Port Madison Reservation, home to the Suquamish Tribe of Washington, has just grown in size.
The Bureau of Indian Affairs added about 283 acres to the reservation. The property includes the White Horse Golf Club, which the tribe purchased in 2010 for $4.65 million. “The land was proclaimed to be an addition to the Port Madison Reservation of the Suquamish Indian Tribe of Washington, for the exclusive use of Indians entitled by enrollment or tribal membership to reside at such reservation,” the BIA said in a notice that was published in today’s issue of the Federal Register.
Federal Register Notice:
Proclaiming Certain Lands, White Horse Golf Course Property, as an Addition to the Port Madison Indian Reservation for the Suquamish Tribe (February 28, 2014)

PORT ANGELES — The Makah tribe continues to add economic development in Neah Bay and is working on a nine-hole golf course to increase tourism and recreational opportunities.

New activities and more accommodations for visitors is a large part of the tribe’s current focus, Mike Rainey, enterprise business manager for the Makah tribal government, told an audience of about 40 at a Port Angeles Regional Chamber of Commerce luncheon Monday at the Red Lion Hotel.

A parcel has been set aside on the Makah reservation to build a nine-hole recreational golf course in Neah Bay for the use of residents and for visiting fishermen who would welcome an alternate activity, Rainey said.

However, he said, there is no new activity on a previously discussed concept to build a zip-line park on Makah lands.

“There are a lot of people talking about it and no one doing it,” he said.

Currently, the tribe’s 2013 budget expects $7.2 million income from its resort, cabin and camping offerings, marina, restaurant and mini-mart, he said.

Rainey said that additional guest cabins are being built with more planned to accommodate an expected increase in visitors.

The tribe had a choice of importing prefabricated cabins or building them on site, he said.