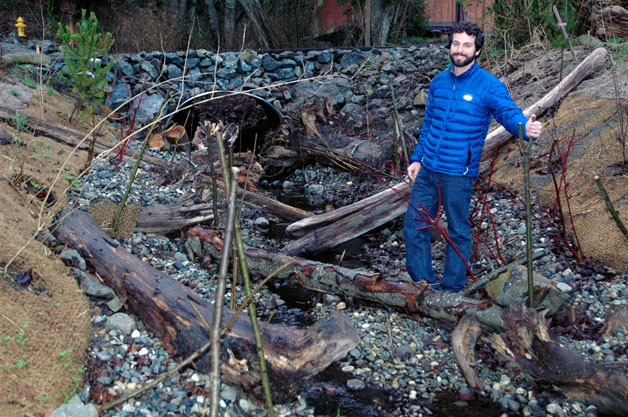 Brett Shattuck, forest and fish biologist for the Tulalip Tribes, stands beside the wood debris that was installed during this fall’s restoration of Greenwood Creek to make it a better salmon habitat.
— image credit: Kirk Boxleitner

STANWOOD — The coastal stream at 18510 Soundview Drive NW in Stanwood began as a “degraded straight ditch,” according to Brett Shattuck, forest and fish biologist for the Tulalip Tribes, but the gulch came to reclaim its old name of Greenwood Creek in the wake of its restoration as a salmon habitat this fall.

“We spent years studying all the coastal streams in the Whidbey basin, looking for which ones were used the most by juvenile chinook salmon, and we found the highest number of them here,” said Shattuck, who reported that Tulalip Tribal Natural Resources staff counted 280 chinook, out of a total of 600 juvenile salmon that also included coho and other species, during a single day’s electrofishing survey. “Even though this property is owned by Snohomish County and in a public right-of-way, it was an ideal restoration site, so we spent the past year pursuing that. Our neighbors were very supportive, and the county was willing to work with us and the Adopt-A-Stream Foundation to find a strategy that was beneficial to the county, the local residents, the Tribes and the fish.”

Shattuck explained that crews pulled back the banks of the stream to widen it, cleared out invasive species such as blackberry brambles, installed large wood debris to foster a better habitat for the salmon, and planted a dense variety of native vegetation to help hold back the stream banks and provide shade for the salmon.

“We’ve got about 300-400 trees and shrubs, not including the live stakes, all about two feet apart from each other,” said Shattuck, who listed willow, red cedar and red twig dogwood as among those species. “Volunteers and Tribal Natural Resources staff did most of the planting in about a day. The county donated the plants and wood debris, and their staff helped us with the permitting and engineering of the site. Again, the stream’s neighbors were really behind us, and it was good working with the Adopt-A-Stream Foundation’s contractor. Our funding source was the Pacific Coast Salmon Recovery Fund.”

According to Shattuck, the contractor work ended in September and the planting took place in October, and all that’s left now is to install the interpretive sign for the site — which he expects will be completed within the next couple of months — and to continue the monitoring work that led the Tribes to select the stream in the first place.

“We monitored this site for three years prior to implementing anything,” Shattuck said. “This is a pilot program, because there are plenty of other drainage streams in the basin that could be made into better habitats for their fish.”

“If we are truly committed to seeing salmon stocks rebound to harvestable levels, we must work together on recovery projects both large and small,” Tulalip Tribal Chair Mel Sheldon Jr. said. “Greenwood Creek represents a small project with a huge benefit. The Tulalip Tribes look forward to working with Snohomish County on future projects to solve our salmon crisis.”