Effects of climate change and the ongoing loss of salmon habitat came home to roost at this year’s tribal and state salmon fishing season setting process. The result was some of the most restrictive salmon fisheries ever seen in some areas.

The co-managers set seasons based on the need to conserve the weakest salmon stocks. The goal is to protect the weakest stocks while also providing limited harvest on healthy stocks which are mostly hatchery fish.
Last year’s salmon runs throughout Puget Sound returned far below expectations. Those fish that returned faced low stream flows that led to water temperatures soaring to 75 degrees or more in some places. Water temperatures 70 degrees or higher can be lethal to salmon. Last year many adult salmon – both hatchery and wild – died before they could spawn or reach a hatchery.

This year’s returns of hatchery and wild salmon are expected to be about 30 percent lower across the board than last year’s poor returns. Lake Washington chinook provide a good example of why this year’s fishing seasons needed to be more restrictive.

Hatchery and wild salmon returning to Lake Washington must pass through the most urbanized parts of western Washington where they are confronted by polluted stormwater runoff, barriers and low stream flows. When combined with the effects of elevated stream temperatures, the results can be deadly for salmon.

The Muckleshoot Tribe, which tracks salmon migration into the lake through the Ballard Locks, quickly realized the extent of last year’s low returns and took action to protect the remaining fish. The tribe sharply reduced or eliminated planned harvests, including culturally important ceremonial and subsistence fisheries. But by then most of the damage had already been done. Despite tribal sacrifices, Lake Washington wild chinook populations were further diminished and hatchery egg-take goals were unmet.

Given last year’s poor returns and the increased effects of climate change and habitat loss, the tribes were stunned when the Washington Department of Fish and Wildlife – apparently at the prodding of sport fishermen – proposed even higher chinook sport harvest this year. Their proposal included a mid-Puget Sound fishery targeting chinook in an area where the weak Lake Washington run congregates. But the tribes rejected the proposed harvest increases and the fisheries were withdrawn, leading to howls of protest from some anglers.

The package of fisheries developed by the co-managers for 2015 reflects the reality of lower abundance and reduced fishing opportunity for everyone. Good salmon management requires us to balance the needs of the resource against the desire by some to catch more fish every year. That is why we must have strong leadership to make the tough decisions needed to protect the resource.

The treaty tribes believe that salmon must be managed in the best interest of those who will follow seven generations from now. We will not allow tomorrow’s salmon to be sacrificed for today’s harvest. 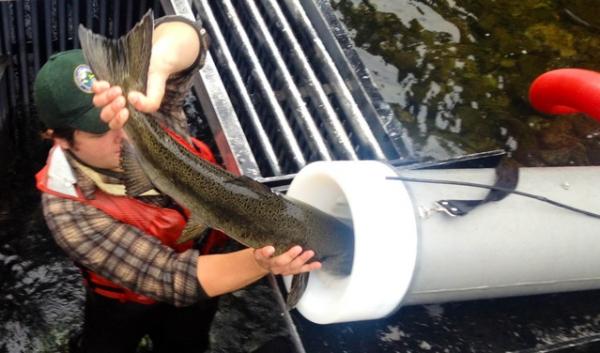 Washington Deparment of Fish and Wildlife crews load 30-pound fall chinook salmon into the salmon cannon. The cannon sucks the fish up to a truck at 22 miles per hour. The fish will then be driven to a nearby hatchery. | credit: Courtney Flatt

WASHOUGAL, Wash. — Salmon may soon have a faster way to make it around dams. There’s a new technology that’s helping to transport hatchery fish in Washington. It’s called the salmon cannon — yes, you read that right.

First, let’s set the record straight: there’s not really an explosion. But the salmon cannon does propel fish from one spot to another.

That was demonstrated Tuesday, when the salmon cannon transported fish from southwest Washington’s Washougal River to a nearby hatchery. The goal is to make the move easier on the fish, in three steps.

Watch the video: The Salmon Cannon In Action

First, the cannon: A long, flexible tube stretches out of the river. At one end, crew members wade into the river. They heave up a 30-pound fall chinook salmon and lift it into the tube.

The fish is sucked up the 110-foot tube at about 22 miles per hour. And then it plops out into a truck filled with water and swims around.

“It’s almost magical the way the fish will move through the system. It’s like a slip and slide, going uphill,” said Vince Bryan, the CEO of Seattle-based Whooshh Innovations, the company that’s engineering the salmon cannon.

After the truck is filled with about 100 fish, they’ll be driven to a nearby hatchery. These fall chinook salmon will be used to help breed next year’s hatchery runs for the Washington Department of Fish and Wildlife.

Eric Kinne, the department’s hatchery reform coordinator for southwest Washington, said the fish are less stressed with the salmon cannon. Before this, salmon were transported with a forklift and tote container.

“We would have to fill it with water and put the fish in. Then we’d have to turn it around and haul it up to the landing area and then dump them into a truck. It was very hard on fish,” Kinne said.

The salmon cannon technology was first used as a way to transport fruit. Bryan said the hope is that it will one day transport fish up and over large dams on the Columbia and Snake rivers.

“We’ve actually had even early discussions with getting fish over dams like the Grand Coulee. We’re starting out much smaller than that, obviously,” Bryan said.

It’s also a way to keep hatchery fish out of the natural spawning grounds of wild fish, Kinne said.

“We held them for six weeks to see if there was any difference in mortality, or difference in condition of fish, and no. Everything was really good,” Kinne said.

Every once in awhile, a small salmon will get stuck in the tube, which is designed to operate with fish 15 to 30 pounds. Crews can then send either a water-soaked sponge or a larger salmon to help move it up the tube. 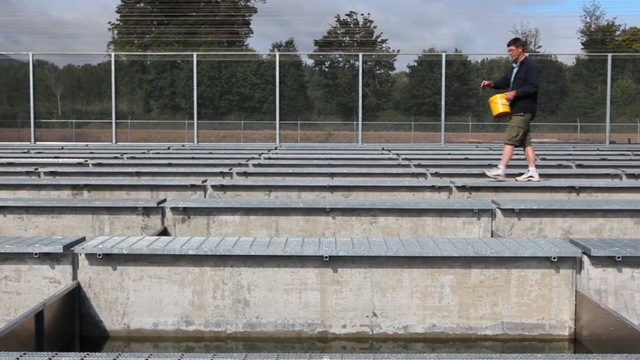 In this 2011 photo, Lower Elwha Hatchery Manager Larry Ward feeds the steelhead and coho that are being raised in a hatchery for introduction to the Elwha. | credit: Katie Campbell | rollover image for more

As crews finish the largest dam removal in history on the Elwha, managers are working to restore fish runs above the dam sites. Their plan includes releasing more than 7 million hatchery salmon and steelhead into the river.

That plan has been controversial. Some conservation groups want to see wild fish repopulate the river on their own. They’re worried that releasing too many hatchery fish will reduce the chances of wild fish reproducing. They sued the agencies in charge of the plan as well as officials with Lower Elwha Klallam Tribe, which operates hatcheries on the river.

One of their arguments was that the agencies –- including the National Marine Fisheries Service and the National Park Service –- failed to consider options that would release fewer hatchery fish into the river.

“There was no range of alternatives,” said Kurt Beardslee, executive director of the Wild Fish Conservancy. “It was either plant all of the hatchery fish or none.”

In his opinion, the judge wrote that “the court is concerned with the spring coho and steelhead releases,” and as the agencies consider options for releasing fewer hatchery fish, those proposed numbers “would be a good starting point for an agreement.”

The National Marine Fisheries Service released a statement in response to the decision noting that the judge upheld the overall hatchery plan for the Elwha River.

“Numerous reviews and a broad consensus of scientists have found that hatcheries are necessary during dam removal to prevent the wild Elwha salmon and steelhead populations from being extinguished by sediment as the dams come down,” the statement reads. “The court upheld the Federal agencies’ decisions and the hatchery plans of the Lower Elwha Klallam Tribe on all points except one.”