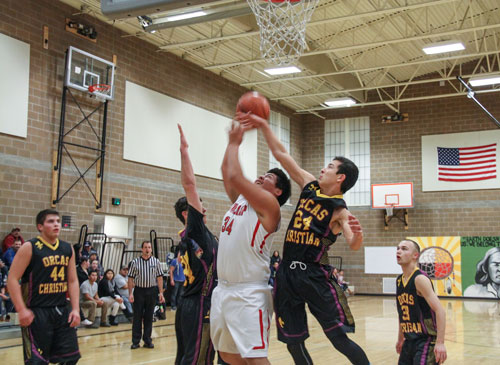 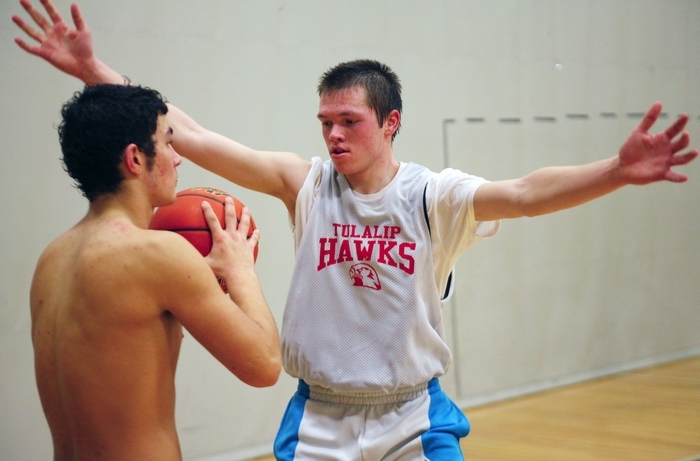 At the Spokane Arena on Thursday, the Hawks begin their quest for a fourth — and make no mistake, this is the one they really want.

A state championship is just three victories away for the Hawks, who face Neah Bay at 10:30 a.m. Thursday in the Class 1B state quarterfinals.

A big reason for the success Tulalip Heritage (26-1) has enjoyed this season has been the play of senior Keanu Hamilton, who recently was named the Northwest 1B League’s Most Valuable Player.

Not bad for a kid who hadn’t played organized basketball until his sophomore year of high school.

For a preview of the local schools involved in the 1A/2A and 1B/2B state tournaments, click here.

Hamilton, a 6-foot-1 guard/forward, was primarily a baseball player before he turned out for basketball nearly 2½ years ago. A natural athlete, Hamilton was fast and could jump, but the rest of his game needed a lot of work.

Hamilton couldn’t make a layin, couldn’t dribble and couldn’t shoot. It was a rough start to his basketball career.

“Every time they threw the ball to me, I wouldn’t catch it,” Hamilton said. “I don’t know what (the problem) was, I just couldn’t catch the ball. I couldn’t even like walk and chew gum on the court. It was bad.”

Skills Hamilton’s teammates learned as children he was now trying to master as a teen-ager.

Hamilton was a project, but one Fryberg saw potential in from the beginning. Hamilton played on the junior varsity as a sophomore and began putting in the work that would land him on the varsity as a junior. Fryberg even started Hamilton a few times last season.

“That was the best feeling in the world, getting to start, because usually I just get cut from teams because I was really bad,” Hamilton said.

Hamilton doesn’t have to worry about getting cut anymore. His hard work has turned him into one of the most multi-dimensional 1B players in the state.

“Some kids don’t put in that work,” Fryberg said. “He’s definitely a different kid. To watch him over the past three years and see his progress is just phenomenal.”

The Hawks got off to a good start this season, but the first of their three victories over Lummi kicked the season into high gear. A double-digit win evened the regular-season series between the two teams and gave Tulalip Heritage a chance to capture the league title with a win over the Blackhawks in the third and final regular-season meeting — which they did.

In the district-title game, the Hawks defeated Lummi for a third consecutive time.

Riding high, Hamilton and the Hawks didn’t stop there.

In the tri-district championship game, Hamilton scored the game-winner in the final 10 seconds and the Hawks knocked off No. 1-ranked Neah Bay.

Tulalip Heritage senior point guard Bradley Fryberg, a senior transfer from O’Dea, beat his defender off the dribble and found Hamilton underneath the basket. With two defenders closing in, Hamilton put up the shot that gave his team a 68-66 win.

Fryberg-to-Hamilton is a one-two combination that has been working for much of the season.

“It’s gotten to that point to where it’s just instinct now,” Fryberg said of his connection with Hamilton. “You just know where he’s at.”

In just two years, Hamilton has gone from a player who could barely dribble to one of the most difficult players to defend at the 1B level, averaging about 18 points per game.

“He’s a coach’s nightmare,” Fryberg said. “If you try to guard this guy, you’ve got to put at least two guys on him because he just doesn’t quit.”

But for all Hamilton has accomplished, there is still one goal left on his list.

After an 81-64 victory over Wilbur-Creston in Friday’s regional game, the Hawks are just three wins away.

It won’t be easy — three of the top five 1B teams in the state are in the top half of the bracket (No. 1 Neah Bay, No. 3 Tulalip Heritage and No. 4 Pomeroy).

“I told my boys, ‘What is a better way than to win it than by playing all the best teams in the state?'” Marlin Fryberg said.

While Neah Bay might have revenge on its mind stemming from the loss to Tulalip Heritage in the tri-district championship, the main focus for the Hawks is doing whatever it takes to get to the semifinals.

“It’s just a basketball game to us,” Marlin Fryberg said. “We’re going to go and put our work in and the best team is going to win — and I’m pretty confident it’s going to be us.”

The Tulalip Heritage Hawks will play Shorewood Christian Lions today at 3:00 p.m. at Mount Vernon Christian High School. This is the second tri-district game for district one 1B champions, the Heritage Hawks, who stand 23-1 for the season, undefeated in the post season, and are second seed for the 1B class ranking. 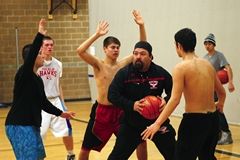 Genna Martin / The Herald
A group of Tulalip Heritage players guard assistant coach Cyrus Fryberg Jr. (center) during a drill at a recent practice. The Hawks are motivated to get to the state tournament in Spokane after falling just one game short last year.

TULALIP — To understand the success the Tulalip Heritage boys basketball team is having this season, one first must understand the heartbreak that came before it.

Facing Taholah, a team Tulalip Heritage had beaten by 20 earlier in the season, the Hawks fell 57-45 in last year’s tri-district tournament. The Chitwhins advanced to state, while the Hawks season came to an abrupt end.

“It crushed them to lose that game, especially to a fellow tribal school,” Tulalip Heritage head coach Marlin Fryberg said.

The loss didn’t sit well with Fryberg either, who was forced to evaluate how it had happened.

“That changed the tone for me as the coach,” Fryberg said. “As head coach, I will take that (loss) as my responsibility. All summer long it weighed on them because they really wanted to go to Spokane and coming one game short I told them, ‘I own that. That’s my fault for not having you ready and I’ll never put you in that same situation ever again.'”

Of course Fryberg’s promise was two-sided. He has demanded more from his players at practice this season and redefined each player’s role on the team to eliminate any misunderstanding of their responsibilities.

Fryberg’s expectations of his players extend further than the basketball court. He expects them to maintain their grades in order to stay eligible and behave in the classroom.

“I think the success we’ve had is attributed to a lot of the dedication they have given to the discipline we’re demanding,” Fryberg said. “It gets down to the point where if they are tardy for school I’ll make them run. They’ll pay for it here because in life you’ve got to be disciplined.”

Grades have been a problem for Tulalip Heritage teams in the past, but not with this group. Fryberg said they’re all performing in the classroom — which has helped the Hawks perform on the court.

Fryberg’s squad has opened the season 12-1 and earned the No. 5 ranking in the state in the season’s first AP poll.

The only team to beat the Hawks this season is the team directly above them in the poll, No. 4 Lummi. The Blackhawks rallied from a 14-point halftime deficit to win the matchup of the then-unbeaten teams on Jan. 7. Lummi has since lost to Neah Bay, joining the Hawks, and every other 1B team in the state, with at least one loss.

Dating back to last season, the past three meetings with the Blackhawks have all been decided by three points or less.

“We’re right with them,” Fryberg said. “Mentally, we kind of fell apart a little bit and that’s what cost us the game.

The Hawks missed crucial free throws down the stretch that allowed Lummi to comeback and win a game that sophomore forward Robert Miles said they should have never lost.

“It really motivates us because we knew we should have had that game,” Miles said. “Even their crowd, they told us that they stole one from us and that we deserved to win it. That’s going to be a big motivator for us.”

The two teams renew their rivalry tonight, this time on the Hawks’ turf. With three meetings between the two schools in the regular season, Fryberg said the Hawks have to win to have a chance at a league championship.

“The first game is the important game,” Fryberg added. “That’ll tell you mentally as a ballplayer what you have to do. Or, if you’re on the losing side such as us, than we have to work harder. If you win that game, you’re kind of in the driver’s seat because you play three games. If you get one more out of the two, the way we’ve been running, you’re going to be first in the league.”

The game also brings large crowds many of the players aren’t used to playing in front of. Fryberg expects a similar sized crowd tonight.

“This is a rivalry between tribes that goes way back,” Fryberg said. “There are a lot of people. The (game) in Lummi was the biggest crowd ever up there in high school. And it went right down to the wire. It was great.”

The rivalry between the two schools is made stronger by the fact that many of the players play with each other or against each other in different tribal tournaments.

They’re all friends,” Fryberg said. It makes it a bigger rivalry when they come together.”

Senior Keanu Hamilton, one of the Hawks’ leading scorers, said the team will have to work even harder if it expects to avenge the earlier loss to the Blackhawks.

“If we worked that hard (before the first Lummi game), than we’ve got to work harder,” Hamilton said. “It’s going to be a big game. They’re our rivals and they’re coming here. We almost had them there. It’s going to be huge here.”

Tonight’s game is just another step toward the Hawks ultimate goal of competing for the state championship at Spokane Arena in early March. The Hawks’ consistent effort the first 13 games of the season has put them in a position where that goal seems attainable.

Fryberg has been involved with basketball for the better part of his life, but advancing to the state tournament is something that eluded him as a player.

Hamilton doesn’t want to have that same regret.

DARRINGTON — Keanu Hamilton scored a team-high 14 points and Shawn Sanchey added 12 as Tulalip Heritage defeated Orcas Island in a Darrington Holiday Tournament game. Next up for the Hawks is tournament host Darrington on Saturday at 7:30 p.m.