Snohomish County Crime and Community is hosting a community event on October 27th, 2014, at 4:00 PM, at Comeford Park, Marysville, WA: Paint the Town Red & White – Together We  Unite.  This event is open to the entire community.  Kickoff will begin at 4:00PM.  City of Marysville representative Jim Ballew will address volunteers with regard to important safety considerations.

Donations of plastic rectangle tablecloths will be accepted – to create waterproof bows.  These bows will be tied and placed along state, 3rd and 4th.

The primary purpose of this ribbon tying event is to show community unity and support via profound placement of primary MPHS colors: red and white.  During this sensitive time it is vital that as a community the residents of Tulalip and Marysville unite strongly, showing our kids that We Love Them All.  Placement of these lasting bows will remind all who view them that this community is tied together, united, together we persevere. 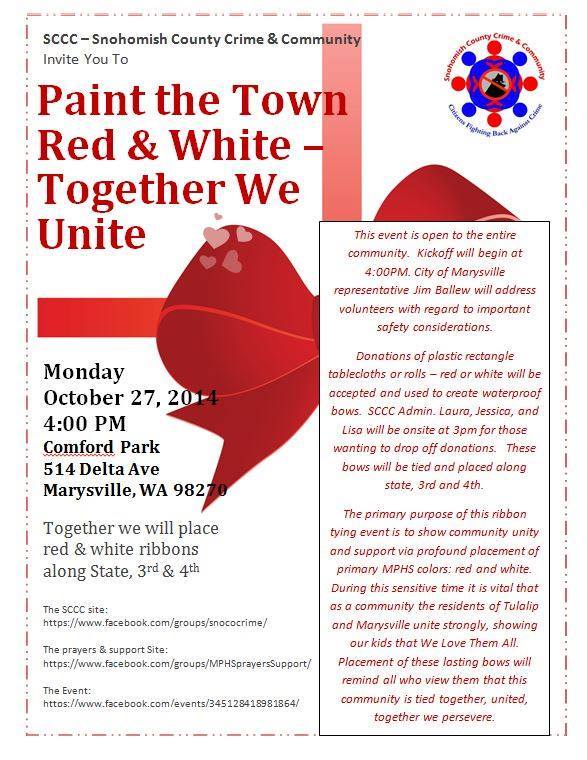 Salt Lake City, Utah— The Western Folklife Center is in production of a public television documentary that examines the emotional trauma of war through the prism of Native American tradition and ceremony. Healing the Warrior’s Heart reveals the central role that military service plays in Native life and explores the spiritual traditions that help returning American Indian soldiers reintegrate into society. The Folklife Center’s Media Producer, Taki Telonidis, is producing the documentary in collaboration with Gary Robinson of Tribal Eye Productions, and KUED Channel 7, Salt Lake City’s PBS affiliate.

For centuries, tribal cultures have used healing songs and ceremonies to cleanse their warriors of war, and despite the loss of language and culture among many tribes, these traditions remain vital on several reservations in the West, and they hold lessons for our nation as it struggles to bring comfort to the latest generation of warriors suffering from Post Traumatic Stress Disorder (PTSD). Despite great efforts by medical and military professionals to treat PTSD, many veterans continue to suffer from it, and there is a small but growing community of psychologists, counselors and clergy who are looking toward Native American traditions to bring healing to our suffering soldiers.

Much of the documentary focuses on members of the Blackfeet tribe in northern Montana. The Blackfeet Nation is a place where warrior identity is very much alive in our time, even though many current soldiers have lost the connection with the healing traditions that were practiced by their ancestors. Yet there are others for whom those traditions remain relevant, both during their deployment as well as in their re-entry to society. The documentary will include interviews and scenes with spiritual leaders, veterans from the wars in Iraq and Afghanistan as well as elder veterans, family members and tribal leaders.

In September, Taki Telonidis was honored for a radio program that grew out of his research on the film. “Veteran’s Find Healing in Native American Tradition,” aired on National Public Radio’s All Things Considered on Memorial Day in 2012, and documents how veterans at the Salt Lake City VA Hospital were benefitting from traditional healing ceremonies conducted in a sweat lodge on the hospital grounds. The Religion Newswriters Association (RNA) awarded Taki first place in the category for Radio or Podcast Religion Report of the Year for the show. RNA is a charitable, literary and educational organization whose purpose is to promote excellence in media coverage and in public discourse about religion.

The Western Folklife Center is dedicated to exploring, presenting and preserving the diverse and dynamic cultural heritage of the American West. We celebrate the wisdom, artistry and ingenuity of western folkways through exhibitions, educational programs, national radio and television programs, research and preservation projects, our website, and our premier event, the National Cowboy Poetry Gathering. We nurture connections among rural and ranching cultures globally, exploring universal themes in working traditions and artistic expression, which we believe are vital links to the past, present and future of the American West.