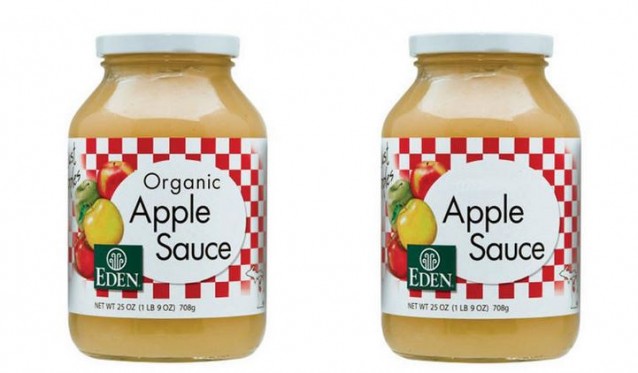 Which would you pick?
CREDIT: University of Houston

Those nutrition-related buzzwords can effectively mislead Americans to believe they’re buying healthy food, even when the product in question isn’t actually very good for them, according to a new study conducted by University of Houston researchers. Those words create a “false sense of health” that can override other warnings on the nutrition label.

“While many individuals may be trying to increase the health of their diets, food marketers are taking advantage of them by misleading those consumers with deceptive labeling,” the study’s lead researcher, Temple Northup, writes.

To reach those conclusions, Northup developed an online survey that showed images of food products with and without nutrition buzzwords. The survey was based on real packaging for products you can buy in the grocery store — like “organic” Annie’s Bunny Fruit Snacks, “whole grain” Chef Boyardee Beefaroni, “heart healthy” Chocolate Cheerios, and Cherry 7-Up “with antioxidants.” Participants consistently rated the products that included the buzzwords as healthier.

“When people stop to think about it, there’s nothing healthy about Antioxidant Cherry 7-Up — it’s mostly filled with high fructose syrup or sugar. But its name is giving you this clue that there is some sort of health benefit to something that is not healthy at all,” Northup, who is an assistant communications professor at the University of Houston and the co-director of the University’s Gulf Coast Food Project, noted in a news release.

Previous research has also confirmed that Americans are swayed by food packaging. People are more likely to assume that products with green labels are more nutritious. One recent study found that when chocolate is labeled “fair trade” — something that reflects its ethical business practices and has nothing to do with its nutritional quality — people assume it must also be healthier. Thanks to effective advertising tactics, kids are now more likely to be able to identify junk food brands compared to healthier brands.

Deceptive marketing may be particularly persuasive to Americans because most people don’t know how to read nutrition labels. When Northup asked participants to rate products on their healthfulness solely by looking at their FDA-approved nutrition label, many of them couldn’t do it accurately. About 20 percent of people picked Spam as a healthier product over salmon.

Advocacy groups like the Center for Science in the Public Interest (CSPI) have been pressuring the FDA to crack down on misleading advertising claims for years, particularly for products that make overreaching claims about their health benefits. But the agency is slow to make meaningful policy changes to protect public health. Although the FDA released proposed tweaks to its iconic nutrition label in February, in an attempt to make it easier for people to understand, it will be several years before that regulatory change will actually take effect.

Sometimes, CSPI tries to take matters into its own hands. Last year, 7-Up agreed to stop selling sodas that tout antioxidants after the group filed a federal class action lawsuit against the company.

At the beginning of every year, we read the tea leaves to see what new food trends we’ll be tasting in the coming months. This year, the tea itself is the trend.

Tea leaves will be big in entrees, desserts and, of course, cocktails. Starbucks has opened its first tea shop.

We won’t be just drinking tea; Artisan distilling keeps on growing. This could be the year of gin, made with local botanicals as well as the traditional juniper berry.

New — but still ancient — grains will join the now-common spelt and quinoa. Teff and freekeh may be as familiar to us by the end of next year.

Another study finds we threw out 40 percent of our food last year. Now grocery auctions offer unsold food, and even the former president of Trader Joe’s will open a market selling perfectly good food that’s just past its sell-by date.

Vegetarianism is no longer just for vegetarians. While most Americans still eat meat, 47 percent of the country eats at least one vegetarian meal a week.

Cauliflower, by the way, is the new Brussels sprout.

Eating local is going into overdrive. Restaurants and markets have planted gardens and built farms — on the ground and on the roof.

And if you can’t grow it, you can buy it from professional foragers, who will bring chickweed and chanterelles to chefs and consumers.

Small-scale meat producers will be available as we continue to fret about industrial farming. Expect more goat, rabbit and pigeon — or squab, if that makes you feel better.

The meats may be flavored with za’atar or sumac, which should easier to find as we dig deeper into the foods of the Mideast.

From the Middle East we go to the Middle West for simple, hearty cooking. The Food Network names the Midwestern food movement as the No. 1 trend for 2014. You betcha.

Bonny Wolf is managing editor of americanfoodroots.com and editor of NPR’s Kitchen Window.