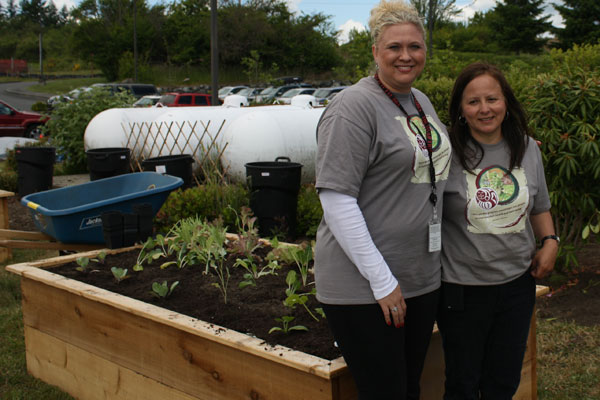 The Tulalip Health Clinic’s new garden program, developed to combat diabetes, opened June 11. The clinic hopes it can get patients to eat healthy by teaching them to grow healthy foods.
Veronica Leahy, diabetes program coordinator at the Tulalip Health Clinic, says that participants will learn about blood pressure, their weight, healthy foods and exercise, but they will also learn about canning, making vinegars, salad dressing and jams.

“They’ll see it’s colorful and that’s what we really want to demonstrate,” she said. “It’s not so much having a classroom and watching a Powerpoint. This is a way of teaching people intangible ways to be healthy by working and laughing outside together, connecting, relationship building, which is also really good emotionally. We’re feeding not just their bodies, but we’re feeding them in emotional and spiritual ways, too.”

The program will take place during the work hours for the clinic.

The clinic’s garden is inspired by a pilot program started two years ago at the Hibulb Cultural Center called “Gardening Together as Families.”

“The idea of that was to teach families how to grow organic vegetables so that they would learn to have a healthier, well-balanced diet and learn how to enjoy gardening,” said Leahy.

Leahy liked how the program brought families together, engaged them with healthy eating and how families came back week after week. “Multi-generational families are coming together and eating, talking and working outside and then starting to grow small little container pots of plants,” she said.

The Tulalip Health Clinic will also supplement its program with more medical services like blood pressure screenings and diabetes screenings.

Leahy said the reaction has been positive so far. “One of the things I’ve really enjoyed is hearing people say ‘it’s so nice to come to the health clinic and not be sick’ but they’re coming here to do something fun at the health clinic,” she said.

She also pointed out that tribal leader Hank Gobin had been a supporter of the Hibulb garden before he passed away this April and that this new garden was started on his birthday.

Clinic staff members hope that patients take ownership of the garden and drive the program forward. “Our slogan is ‘working together to create a healthy and vibrant community’ and this is the tangible part of that,” Leahy said.

The clinic hopes to expand their garden when the health clinic expands next year and eventually create a garden walk for patients so they have something to do instead of waiting in the lobby, Leahy said.

For more information contact Veronica Leahy at 360-716-5642 or vleahy@tulaliptribes-nsn.gov.