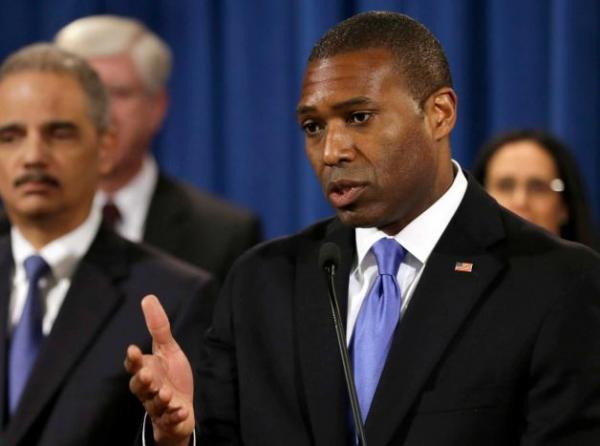 AP Photo/Jacquelyn Martin, File
In this Feb. 5, 2013 file photo, U.S. Associate Attorney General Tony West gestures during a news conference at the Justice Department in Washington. West is scheduled to be in Bismarck, N.D. on Monday, Dec. 9, 2013, to talks about plans for a national task force to examine the impact of exposure to violence on American Indian and Alaska Native children.

“One of the reasons why it’s important for me to go to Indian country periodically is to remind myself that people living there do not give up. And if they’re not giving up, we’re not giving up,” U.S. Associate Attorney General Tony West, the department’s third-highest official, told the Associated Press.

The first public hearing of the advisory committee of the 12-member Task Force on American Indian and Alaska Native Children Exposed to Violence was held Monday, December 9 in Bismarck, North Dakota. The task force is divided into two tiers: a federal working group comprised of U.S. attorneys and officials from federal Interior and Justice departments, and an advisory committee of experts on Native American studies, child health and trauma and child welfare and law. The committee makes policy recommendations to Attorney General Eric Holder.

After graciously thanking all of his colleagues and others instrumental in making the Task Force a reality, West expressed deep appreciation to the Task Force Advisory Committee’s two co-chairs, former U.S. Sen. Dorgan and Iroquois composer and singer Joanne Shenandoah.

“As everyone in this room knows, Senator Dorgan has been a champion of North Dakota’s tribes during his entire career, including his 30 years in Congress. His commitment to children in tribal nations is unparalleled,” West said. “Likewise, Ms. Shenandoah is a highly respected and deservedly celebrated artist who has used her talent to call attention to the plight of children in Indian country. We are very fortunate to have them at the helm of this group and leading this effort, and I’m thankful, too, to the other members of the committee for their commitment and expertise.”

Below is an except of West’s prepared remarks at the hearing:

“Fifty years ago Attorney General Robert Kennedy came here to Bismarck and spoke of the “tragic irony” of First Americans living in the freest country in the world yet imprisoned by conditions of poverty and deprivation — conditions not found in the natural order of things but manmade, imposed and perpetuated by bigotry and greed and violence.

And Attorney General Kennedy spoke of our responsibility to reverse that historical tide, so that the light of freedom, just dawning, he said, in his own lifetime, might fully shine on his children.

And so we’ve come here to Bismarck, a half-century later, to help fulfill that pledge, and to reaffirm a promise we must make to all of our children: that their safety and well-being is our highest priority; that they are sacred beings, gifts from the Creator to be cherished, cared for, and protected.

Because the simple, sad fact is that too many of our American Indian and Alaska Native children still suffer or witness violence in Indian country. Too many see family members or friends fall victim to violence; and too many are victims themselves.

And the impact this has on lives both young and old cannot be overstated. It tears at the fabric of family and community; it disrupts the present and too often darkens the future. The scars of violence can run deep and have impacts that can seep from one generation into the next.

We know from our own research at the Justice Department that a majority of America’s children—more than 60 percent—are exposed to some form of violence, crime, or abuse, ranging from brief encounters as witnesses to serious violent episodes as victims.

We know that, tragically, almost 40 percent are direct victims of two or more violent acts.

Often this violence occurs in the place where our children should feel the safest: at home. While domestic violence plagues many communities across the country, research shows that rates of domestic violence against Native women are among the highest in the entire United States.

And while we don’t know how many American Indian and Alaska Native children witness this kind of violence; or how many are removed from their homes and experience disruption in their lives as a result; or how many end up continuing the cycle by hurting others; we do know that the impact of on our kids having been exposed to violence can be serious, ranging from poor academic performance and drug and alcohol abuse to long-term psychological harm or even criminal behavior later in life.

But we also know something else: We know that we need not accept these outcomes as inevitable, because our young people are resilient and can return to living normal, healthy lives, as long as they have the benefit of proper intervention.

So as we listen to the testimony today, let us look for new ways in which we can engage all community members — tribal and spiritual leaders; elders and parents; teachers and coaches; and, importantly, young people themselves — let us all be enlisted to address this critical issue, because it is a challenge that requires no less.

Today’s hearing is an important step in that direction, and it’s a natural extension of work the Obama Administration has pursued to fulfill this nation’s trust responsibility and address the challenges that American Indian and Alaska Native communities face.

It grows out of the work that Attorney General Holder began three years ago with a new initiative he called “Defending Childhood.” The goal of Defending Childhood was to improve our knowledge about what works to reduce children’s exposure to violence and how to lessen the long-term adverse impacts of that exposure when it does occur.

And as part of that effort, as many of you know, the Attorney General appointed a national Task Force to identify ways to reduce children’s exposure to violence and to recommend policy changes at the federal level to meet that goal.

We’re implementing one of those recommendations this morning:  a special effort aimed at examining and addressing the exposure of American Indian and Alaska Native children to violence, in ways that recognize the unique government-to-government relationship between sovereign tribal nations and the United States.

There are two parts to this special task force: a Federal Working Group comprised of high-ranking federal officials who work with tribal communities everyday; and an Advisory Committee made of up experts with insights into children’s exposure to violence in native communities.

Now, the Federal Working Group was formed because we know there are things we can do now—things that need not wait for more study—that can have a direct and immediate impact in kids’ lives right now.

So officials from the Departments of Justice, the Interior, and Health and Human Services with proven dedication and experience in Indian country have come together as part of this Federal Working Group to do just that.

And already, they are making a difference.  Here’s one example.  About a year ago, I traveled to the Ute Mountain Ute and Northern Cheyenne reservations.  And among the places I visited were the detention centers, where both adults and juveniles are held.

Now it’s always tragic whenever a young person is locked up; but that tragedy is compounded when that child is warehoused without any assistance that can help prevent that child from future incarceration. And in these two facilities, kids weren’t getting access to adequate educational programming or counseling.

So the Federal Working Group came together and tackled this issue, cutting through the red tape and working together such that contracts are now being secured for teachers who will provide culturally-sensitive educational and counseling services to native youths held in those BIA detention facilities at both Ute Mountain Ute and Northern Cheyenne.

Now, in addition to addressing those immediate issues, we must also develop a strategic approach to the long-term issues of violence that affect children in Indian country. So we’ve augmented the work of the Federal Working Group with an Advisory Committee of experts who have dedicated themselves to improving the lives of children in native communities.

Over the next year, the Advisory Committee will travel the country, holding hearings and listening sessions. They will comb through the research and consult with others to help us paint a clearer picture of the incidence of violence among native children, and help identify ways to prevent it.

And next fall, the Advisory Committee’s work will culminate in a final report—a strategic plan of action that will guide practitioners and policymakers at all levels. And, like the work of the Defending Childhood Task Force, the recommendations of the Advisory Committee will not sit on some shelf collecting dust; as the Attorney General said in his greeting this morning, your work will serve as a blueprint that will guide us into the future.

So this is our charge and our challenge. Today represents an early and important step in protecting American Indian and Alaska Native children. No one here expects this work to be easy, or that the efforts we embark on here will lead to a panacea. But it is an investment—an investment in our children; in the future of sovereign tribal nations on this continent; an investment we fail to make at our own peril, and one whose return will be measured not in dollars and cents, but in the young smiles you create; the doors of hope you will open; the futures you will shape; and the lives you will change.

Thank you for commitment to this work.” 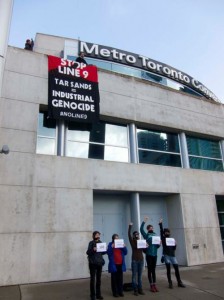 Banner drop in front the of Metro Convention Centre, where the NEB hearings are taking place this week in Toronto. Photo: Michael Toledano

NEB Hearings start in Toronto today, here’s what they won’t be hearing.

A banner drop and a series of gaged protestors demonstrated what is being left out of the National Energy Board (NEB) hearings that are taking place this week in Toronto. The subject of the hearings is Enbridge’s Line 9 reversal and expansion proposal, which would allow the company to ship tar sands bitumen from Sarnia to Montreal. Groups today protested the fact that the hearings have explicitly banned discussion of upstream and downstream impacts of the pipeline reversal and expansion, which would allow the tar sands to expand production and refining.

“Stop Line 9: tar sands = industrial genocide” read a large banner that hung from the Metro Convention Centre’s steps. “We want to remind people that Line 9 is one battle of a larger fight against the most destructive project on the planet, which has already transformed an area the size of Florida into what’s termed a ‘sacrifice zone’,” said Vanessa Gray, an Anishnaabe kwe organizer with Aamjiwnaang and Sarnia Against Pipelines. “The tar sands have been termed a ‘slow industrial genocide’ by the native people living downstream, but this term also applies to people living near the refining of this toxic substance. My people are dying from this industry.”

Aamjiwnaang First Nation has 63 chemical refineries within 50 km of the community. Community-monitoring has reported that 40 per cent of the population required inhalers to breath and 39 per cent of women had experienced miscarriages.

Other groups participating in the action highlighted the increased contribution to climate change that Enbridge’s proposal would entail.

“Approving the transport of diluted bitumen means expanding tar sands production which will be a disaster for the planet, said Lyn Adamson Co Chair Canadian Voice of Women for Peace. “These hearings do not replace the need for an environmental assessment. A National Energy Board should be considering alternatives, such as renewable energy and conservation.”

In addition to restricting who could speak at the hearings, the Omnibus Bill C-38 restricted what those individuals could say in the National Energy Board hearing, restricting discussion on tar sands production or refining.

There will be a large rally against Line 9 at the NEB hearings this Saturday, Oct 19 outside the National Energy Board hearings.