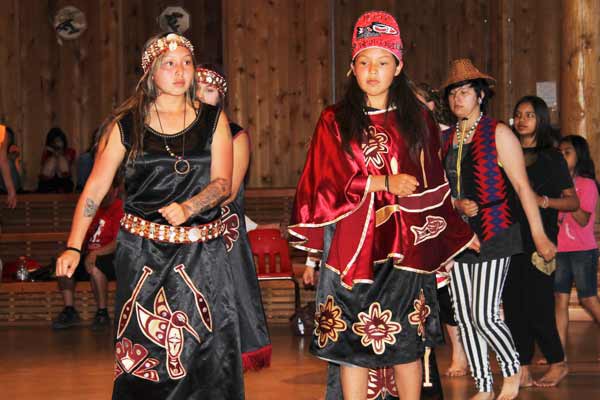 Members of the Nisqually Tribe participate in a paddle dance during protocol, a time of cultural sharing, June 19 in the Port Gamble S’Klallam House of Knowledge longhouse.
Image Credit: Richard Walker/ Staff Photo

On July 13, thousands will see the end of an epic journey.

While that sounds like the start of a blockbuster movie, it’s not (but could be…). It’s a decades-old event that celebrates a timeless tradition of Northwest Coast indigenous peoples.

The 2014 Canoe Journey/Paddle to Bella Bella will bring hundreds of canoes and thousands of people to the Heiltsuk Nation in British Columbia. The procession of canoes and pullers move from host tribe to host tribe, asking permission to come ashore at each stop. After a night of good food and hospitality, they carry on, arms pumping endlessly, gliding through the water to their next destination. All of the canoes are expected to arrive in British Columbia on July 13 and will stay as guests of the Heiltsuk Nation until July 19.

This year’s Canoe Journey is significant because it represents the first time it has returned to Bella Bella since 1993, when Canoe Journey became an annual celebration. The first journey — Paddle to Seattle — was in 1989 with only nine participating canoes, one of which was from the Port Gamble S’Klallam Tribe.

The Canoe Journey is an experience like few others. As PGST Canoe Skipper Laura Price was quoted in our history book, “The Strong People”:

“That thirteen-day canoe journey to Bella Bella (in 1993) changed my life. It opened the doorway for me being S’Klallam. The experience helped build the foundation, passion and commitment in me to preserve, perpetuate, and celebrate our rich cultural heritage for our present and future generations.

“I admire and deeply respect our ancestors who by their resiliency and strength we owe all this amazing rich culture to. Canoe journeys happen every year now. They bring strength to our people by giving us a way to connect to our culture. We gain confidence, pride, respect and identity. We know where we belong and are given an opportunity to learn and grow.”

Canoes are a prime connection between the old world and the new. In pre-treaty times, the type of multi-day and week trips that seem so ambitious for the Canoe Journey were just a way of life. Tribes in this area used canoes to travel all over for trading, to connect with family and friends, and to move with the seasons. They were experts of the water and the weather, understanding the tides and currents.

Occasionally, white settlers would hire S’Klallams for this expertise. For example, Edwin Eells, an Indian agent at Skokomish, hired a S’Klallam crew to take him through the Strait of Juan de Fuca. It was winter and on the way back, they hit a fierce storm and, as recounted in “The Strong People,” “Ells was sure he would perish. The S’Klallams, he reported, kept up a wild chant as they maneuvered the canoe skillfully through the storm, and guided him to safe water. He was very grateful, for he was sure he was going to die that day.”

While canoes are no longer a main source of transportation, they still play an important role in the celebration of our culture. Canoe Journey is a reflection of this.

I want to leave you with this — the “Ten Rules of the Canoe.” They show, I think, how canoeing can reflect the principles of life:

1.) Every stroke we take is one less we have to make. Keep going!

2.) There is to be no abuse of self or others. Respect and trust cannot exist in anger. It has to be thrown overboard, so the sea can cleanse it.

3.) Be flexible. The adaptable animal survives.

4.) The gift of each enriches us all. Every story is important. The bow, the stern, the skipper, the power puller in the middle — everyone is part of the movement.

5.) We all pull and support each other. Nothing occurs in isolation.

6.) A hungry person has no charity. Always nourish yourself. The bitter person, thinking that sacrifice means self-destruction, shares mostly anger.

7.) Experiences are not enhanced through criticism. Who we are, how we are, what we do, why we continue flourish with tolerance.

9.) A good teacher allows the students to learn. We can berate each other, try to force each other to understand, or we can allow each paddler to gain awareness through the ongoing journey.

— Jeromy Sullivan is chairman of the Port Gamble S’Klallam Tribe. Contact him at jeromys@pgst.nsn.us. 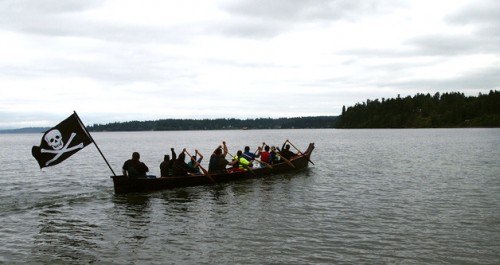 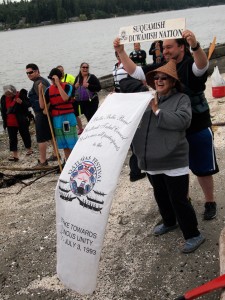