Researchers find oil can harm herring and salmon at much lower levels than once thought. The work raises questions about Puget Sound pollution. 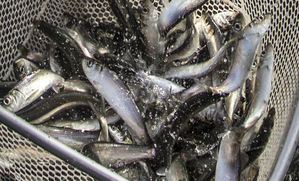 Herring, with much smaller eggs than pink salmon, are more susceptible to the effects from the polycyclic aromatics released from crude oil spills. (Steve Ringman / The Seattle Times)

Federal scientists based in Seattle and Alaska have found that oil — by impairing heart functions — can cause serious harm to herring and pink salmon at far lower concentrations than previously documented.

The research, published Tuesday online in Nature’s Scientific Reports, could help unravel the mystery of why herring stocks in Prince William Sound collapsed after the 1989 Exxon Valdez oil spill. Their work also has implications about the effects of low levels of chronic oil pollution in Puget Sound and elsewhere in the world.

“What this study shows is that in very, very low concentration of oil, embryonic fish … get born with a mild heart defect,” said John Incardona, a National Oceanic and Atmospheric Administration toxicologist at a Seattle fisheries science center. He is one of 10 co-authors of the study.

Those fish may look OK on the outside, but the heart defect makes them less fit, so they can’t swim as fast. They may succumb to predators at higher rates than other fish and may be more vulnerable to infections, according to Incardona.

The findings reflect years of studies that explored the effects of polycyclic aromatic hydrocarbons, compounds released by crude oil spills, but also contained in many other forms of fossil-fuel pollution such as tailpipe emissions from Puget Sound motorists that condense and are carried into the water by runoff.

The research examined the effects on fast-growing zebrafish, and then replicated the heart damage in more complex experiments that exposed embryonic herring and pink salmon to oil.

The researchers found that oil’s effects are greatest in cold-water environments, where fish embryos are less able to metabolize the pollutants. And herring, with much smaller eggs than the pink salmon, suffered the most severe effects from the polycyclic aromatics.

In the aftermath of the 1989 Exxon Valdez spill that dumped nearly 11 million gallons of crude in Prince William Sound, Alaska became the first — and so far only state — to create a water-pollution limit for the polycyclic aromatics, according to Incardona.

That Alaska state limit is 10 parts per billion, but the researchers found herring embryos could be affected at levels 10 to 50 times lower than that. At those levels, herring that returned to spawn in Prince William Sound in 1989 as well as subsequent years could have produced offsprings with damaged hearts.

Those offspring would have hatched, but few may have survived long enough to reach spawning age. That could be a big reason spawning stocks of Prince William Sound herring crashed four years after the 1989 spill.

“The thresholds for developmental cardiotoxicity were remarkably low, suggesting that the scale of the Exxon Valdez impact in shoreline spawning habitats was much greater than previously appreciated,” the researchers wrote.

In the more than quarter century since the Exxon Valdez spill, Prince William Sound herring stocks have failed to recover even as oil pollution has declined to levels unlikely to affect them.

The study published Tuesday does not try to explain the herrings’ current problems, although Incardona says once fish stocks get knocked to a very low level, recovery can be very difficult.

The situation is very different in Puget Sound, which has the highest levels of polycyclic aromatics of any estuary due to ongoing chronic pollution, according to Incardona. The Puget Sound levels are not that far below those found to have effects in the aftermath of the Exxon Valdez, and raise questions about whether this pollution is harming Puget Sound’s struggling herring stocks.

Incardona, who said that federal researchers hope to work with Washington state biologists to try to answer that question.