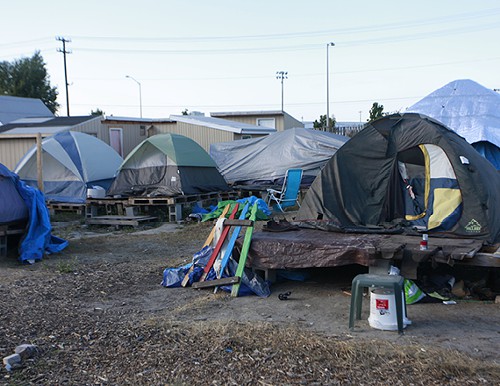 The number of people sleeping on the street in King County increased by 21 percent between 2014 and 2015. KELLY O

By Heidi Groover, The Stranger

Seattle has become the third major West Coast city to declare that homelessness has reached a state of emergency.

Mayor Ed Murray today declared a state of emergency due to homelessness in Seattle—following similar moves in Los Angeles and Portland—and King County Executive Dow Constantine did the same in the county.

To address the emergency, Murray announced $5.3 million in new one-time money that will go toward homelessness services over the next few months. Constantine also pledged $2 million total toward services like law enforcement diversion, housing vouchers, and shelter beds, though some of that is already included in his budget.

Government officials often declare states of emergency about natural disasters in order to “highlight the gravity of the challenge and make formal requests for assistance from the state and federal governments,” Constantine said at today’s announcement at the downtown YWCA. “Homelessness is not a natural disaster. It is a human-made disaster.”

The crisis is undeniable: During this year’s one-night count, 3,772 people were sleeping outside in King County and 2,813 of them were in Seattle. That was a 21 percent increase in the county and 22 percent increase in the city over last year. According to the mayor’s office, 66 homeless people have died in the county so far in 2015, 47 of whom lived on the streets or in homeless encampments, and 3,000 Seattle Public Schools students are homeless.

“Thirty-five thousand,” Constantine repeated. “That is the population of a city the size of Issaquah.”

YWCA CEO Sue Sherbrooke, who spoke in support of the declaration of emergency, said her organization provided case management or shelter for 7,500 people last year. She said homelessness falls “disproportionately [on] women, men, and families of color.”

So, what exactly does it mean for the city to declare a state of emergency?

Declaring an emergency—a move usually reserved for “civil unrest, a natural disaster, or a terrorist attack,” the mayor said—allows the city to move more quickly to fund homelessness services and is basically a cry for state and federal help in addressing the problem. Service providers and local government officials have criticized the federal government for reducing the amount of money it spends on housing and homelessness services, leaving local government to shoulder those costs. As part of the emergency declaration, the mayor said he would also ask the federal government to make FEMA assistance available for homelessness.

“We must get this issue back on national agenda,” Murray said. “It’s foolish to believe cities alone in isolation can solve [homelessness].”

Both Constantine and Murray cited federal disinvestment along with increasing income inequality, a lack of services for mental illness, and a national heroin epidemic for worsening homelessness.

The new $5.3 million, which is a separate pot of money from the ongoing discussions about the mayor’s budget, will come from the sale of excess city-owned property on Myers Way South, according to the mayor’s office. It will be spent on a slate of servicesmostly focused on case management, outreach to people living on the street or in encampments (including illegal makeshift encampments), and 100 new shelter beds with limited hours for one year. The money will also fund some sanitation needs like Honey Buckets and trash removal, but where those will go remains unclear.

Technically, the property on Myers Way hasn’t yet been sold yet, according to the mayor’s office, so the city’s profit is estimated. That means the city is essentially lending itself the money for these homeless services and plans to repay itself after the sale of the property.

Murray called the declaration “risky” because “the orders you can issue under state of emergency are extensive,” including closing businesses or issuing curfews. He isn’t using those powers here, but did promise to consider bypassing zoning restrictions or speeding up permitting processes to create new shelter space for children.

The state of emergency declaration also allows the city to spend money more quickly by simply directing it toward service providers instead of going through the standard contracting process.

That puts most of the responsibility for figuring out the specifics—like where the Honey Buckets and new shelter beds will go or who will be hired for case management—on the city’s Department of Human Services. HSD Director Catherine Lester said after the mayor’s announcement that the shelter beds will be focused on a population that is currently unable to access already existing shelter, like couples, people with pets, or people with certain criminal histories. (Which population is yet to be decided.)

“We really want to make a dent on those things that are keeping people on the streets,” Lester said.

The city council will have to approve legislation authorizing how the $5.3 million is spent, which Council President Tim Burgess pledged to do quickly. Six council members, including Burgess, stood with the mayor at his announcement today. Council Member Mike O’Brien called homelessness a “tragedy in a city that can create so much wealth.”

The list of funding is largely focused on immediate needs—not that surprising for a state of emergency—rather than long-term preventative services, although both Murray and Constantine emphasized the need to address root causes of homelessness.

Constantine said he and Murray spoke directly with President Barack Obama about the issue when Obama visiting Seattle recently.

“He was very aware and concerned not just with increase of homelessness nationally…but also with the particular increase in homelessness in West coast cities,” Constantine said. “We are joining with other West Coast cities to say this time is different. Something different is going on here.” 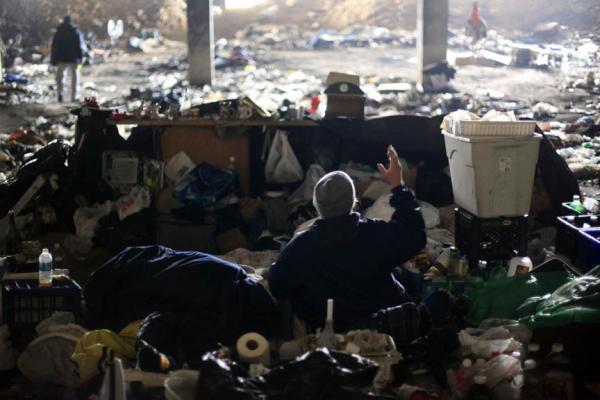 A homeless veteran who declined to be identified speaks with an outreach worker, not pictured, under an overpass during a winter storm in Philadelphia, Wednesday, January 26, 2011.

Native Americans volunteer for America’s military at some of the highest rates in the nation, but Indian veterans often struggle to get the support services they earn – including safe, affordable housing.

Tester, Montana’s only member of both the Senate Veterans’ Affairs and Indian Affairs Committees, is working to change that by helping to add a provision to a funding bill that calls for new initiative to reduce homelessness on tribal lands.

Tester’s initiative would make HUD-VASH funds – which help veterans find housing arrangements where they also are able to receive additional resources to address the root causes of homelessness – available to Native Americans living on tribal lands. It is estimated that at least 2,000 veterans served by VA homeless programs live on tribal lands.

“Native Americans are some of this nation’s most dedicated military men and women, and they shouldn’t have to struggle with homelessness when their service is over,” Tester said. “This initiative will help more veterans get a roof over their heads and the support they need to get back on their feet and contribute to our communities.”

The U.S. Department of Housing and Urban Development provides the housing vouchers through the HUD-VASH program and works with local housing and support groups to provide eligible homeless veterans with services that aid recovery from physical and mental health conditions resulting from homelessness. However, tribally-designated housing entities are currently ineligible to receive and administer these vouchers.

As a member of the Appropriations Committee, Tester pushed for HUD-VASH funds to be made available to tribal housing authorities to assist Native American veterans in securing safe, reliable housing. The committee is responsible for funding the federal departments and agencies, including the Department of Housing and Urban Development.

Tester became the Chairman of the Senate Indian Affairs Committee earlier this year. Since then, he has held hearings on Indian health, tribal transportation, Indian education, energy development, and trust lands.

The funding bill, which passed the Appropriations Committee recently, will next be considered by the full Senate.