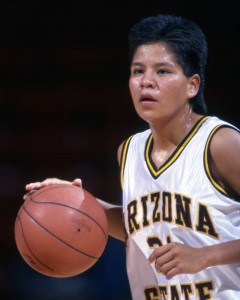 TEMPE, Ariz. – Ryneldi Becenti, a member of the Arizona State University Sports Hall of Fame who twice earned honorable mention All-America notice as a member of the Sun Devil women’s basketball team, will have her No. 21 jersey honored and displayed from the rafters of Wells Fargo Arena on Sat., Dec. 21 when the Sun Devils host the University of Miami, Sun Devil head coach Charli Turner Thorne announced on Monday.

“As we started to evaluate the stars of our distinguished past, it quickly became apparent that no player was more celebrated or had more of an impact – both in her community and within our own Sun Devil community – than Ryneldi Becenti,” said Turner Thorne. “While already in our Hall of Fame for her achievements as a student-athlete, we felt a program-specific tribute like this was fitting for a special individual whose influence went beyond the basketball court.

“The incredible work ethic and desire that led her to our program galvanized the Native American community. Her outstanding contributions as a Sun Devil enhanced her legendary status and remain an inspiration for many. I am so proud to be announcing that we will be hanging Ryneldi Becenti’s No. 21 jersey from the rafters of Wells Fargo Arena on Dec. 21. We hope all our fans and basketball enthusiasts alike will mark the date in their calendars to come out and help us pay tribute to this Sun Devil icon.”

Becenti was a two-time honorable mention All-America honoree while also becoming one of only three Sun Devils (at the time) to earn All-Pac-10 first-team honors twice in a career.

By the conclusion of her two-year Sun Devil career, Becenti would accumulate 396 career assists, which at the time represented the second-highest career total in program history. Her career average of 7.1 assists per game remains a Pac-12 record to this day, while her 17-assist outing vs. Marquette in 1992 still sits atop the team’s list for most assists in a single game. With 15 points, 10 rebounds and 12 assists in a Jan. 25, 1992, game against Oregon State, Becenti became the first player in school history to record a triple-double and was the lone player in the NCAA – men or women – to record the feat that season.

Becenti’s enormous popularity in the community and the Navajo Nation received national acclaim in March 1993, when she was featured in a Sports Illustrated article written by award-winning journalist Gary Smith.

In 1996, she became the first woman inducted into the American Indian Athletic Hall of Fame adding to her list of enshrinements, which includes the Scottsdale Community College Hall of Fame, Arizona State University Hall of Fame and the Arizona High School Sports Hall of Fame.

Veterans will be honored at the MLB All-Star Game to be played July 16 at Citi Field in Queens, New York (despite the home club New York Mets offending American Indians this week). And one of those will be Navajo Code Talker David Patterson. He will represent the Los Angeles Dodgers at the event.

By fan selection through a People magazine effort called Tribute to Heroes, Patterson and 29 other vets, one per MLB team, were voted in and will be honored at the baseball game. Meet all the vets here.

Here is the biography of Patterson provided by People.

David E. Patterson Sr. of Rio Rancho, N.M., is among an elite group of marines who helped create the only unbroken code in modern military history. As one of the Navajo Code Talkers, David and other Navajos coded and decoded classified military dispatches during WWII using a code derived from their native tongue. The Code Talkers took part in every Marine assault, from Guadalcanal in 1942 to Okinawa in 1945, including the Marshall Islands, Kwajalein, Iwo Jima, and Saipan, and doubtless helped win the war. After he was discharged, David, now 90, went to college in Oklahoma and New Mexico, becoming a social worker. He married and raised his family on the reservation in Shiprock, N.M., and worked for the Navajo Nation’s Division of Social Services until retiring in 1987. He was awarded the Silver Congressional Medal of Honor in 2001 and up until last year volunteered in a Shiprock school on the Navajo Reservation as a