Officials are responding to a spill of oily bilge water in Washington’s Puget Sound. The spill occurred at Naval Base Kitsap-Bangor and has spread 10 miles north to Hood Canal.

State agencies estimate that up to 2,000 gallons spilled Monday when a ship was pumping out oily discharge at the naval facility. The pier-side transfer system failed and overflowed.

Initially the Navy estimated that 150 gallons spilled, but by Tuesday other agencies were disputing that amount.

The Washington Department of Ecology has conducted fly-overs and said that the sheen has spread as far as the Hood Canal Bridge, 10 miles north of the base.

The Navy did not immediately respond to requests for an interview.

There were no documented impacts to wildlife as of Tuesday afternoon, but the Department of Health advised against harvesting shellfish from the affected area. 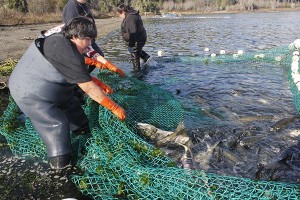 Fishermen in Hood Canal saw a record number of fall chum salmon return this year with an expected runsize of 1.4 million.

Tribal and state managers reported that tribal and non-tribal fishermen caught 1.186 million fall chum in Hood Canal when the expected return was only 324,000. Last year, fishermen caught nearly 582,000 from a final runsize of 674,000.

Skokomish Tribe fishermen in particular were inundated with the amount of fall chum, most of which are produced from WDFW’s Hoodsport and George Adams Hatcheries and the Skokomish Tribes’ Enetai hatchery.

“With the large amount of salmon returning this fall, our fishermen and buyers attempted to keep up with the non-treaty fleet consisting of purse seine and gillnet vessels,” said Joseph Pavel, the tribe’s natural resources director. “The market was flooded by the non-treaty purse seine fleet, landing more than 442,000 fall chum in the last week of October.”

Excess salmon were recycled at a composting facility on the reservation. A local yard and garden supplier has been brought in to manage the composting operation.