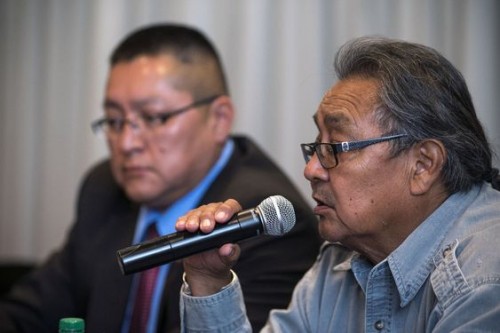 The Hopi Tribe of Arizona lost a bid to stop the auction of sacred property in France.

The Drouot auction house sold 32 masks today, the Associated Press reported, after a judge approved the sale. One item went for $136,000, the AP said.

The U.S. Embassy in Paris asked the auction house to delay the sale. The collection also included items from the San Carlos Apache Tribe and Zuni Pueblo.

FLAGSTAFF, Ariz.—The Hopi Tribe of northern Arizona claims that advisers at a national financial services institute schemed to cheat the tribe out of tens of millions of dollars by lying about the value of tribal accounts, making risky investments and collecting fees to which they weren’t entitled.

The tribe has filed more than two dozen claims against Wachovia and some of its former financial advisers with the Financial Industry Regulatory Authority. It is seeking nearly $190 million in penalties and damages through arbitration that is expected to take more than a year to run its course.

“This is not a case involving a disagreement about a few investments,” tribal attorneys wrote in a statement of claims. “This is the limiting case of greed by a national bank and its agents, which despite their status as fiduciaries, created a risky, dangerous portfolio in which almost all investment assets in the portfolio violated Hopi investment guidelines.”

A spokesman for Wells Fargo & Co, which acquired Wachovia in 2008, said Thursday that the bank will present its side during an arbitration hearing.

The Hopi Tribal Council approved opening a $10 million line of credit at Wachovia in September 2007, which tribal attorneys claim the financial advisers used as a lure to gain access to then-tribal treasurer Russell Mockta and the Hopi assets. Even before the resolution was passed, the advisers worked with Mockta to transfer $2.5 million into a Wachovia account without the council’s approval and made non-permitted and unnecessary investments.

Tribal Chairman Le Roy Shingoitewa said that Wachovia had authority only to make low-risk investments that would guarantee a steady income to finance capital improvements on tribal lands, like a hotel and restaurant in Moenkopi. Instead, the tribe alleges that former Wachovia advisers opened a margin account and quickly purchased high-risk investments, including hedge funds that were barred by tribal policy. By October 2007, more than half of the Hopi’s portfolio had been moved out of fixed income investments, the tribe claims.

Mockta, who was removed from office over what the tribe said was significant financial losses during his tenure, did not return a call for comment Thursday. Tribal attorney Norberto Cisneros said the tribe doesn’t believe that Mockta or other tribal officials knew of the alleged scheme at the time.

Among other claims is that the Wachovia advisers lied to Hopi officials in monthly statements and performance reviews—at times sent from personal e-mail addresses—by overstating the value of the tribe’s assets to keep the Hopis as a client, and overcharged for advisory services on tribal accounts that weren’t subject to management fees. One of the investments was structured so that losses were locked in from the date of purchase regardless of how the financial market performed, the tribe alleges.

Some of the investments related to bonds known as collateralized debt obligations, or CDOs. The value of the CDOs plummeted after the housing market peaked in 2007, sparking panic that caused the global credit system to seize up.

During that period, Wachovia charged other clients, including the Zuni Tribe of New Mexico, 70 percent more for CDO investments than the bank believed they were worth, the Securities and Exchange Commission has said. Wells Fargo settled a case in 2011 that claimed Wachovia Capital Markets LLC misled investors to sell the mortgage bonds to the Zuni Tribe without admitting to or denying the allegations.

Cisneros said that regardless of how the financial market behaved at the time, the Hopi Tribe should not have lost its money.

“These are investments the tribe never should have been in to begin with, particularly in a volatile market,” he said. “Even when they did good investments for the tribe, they took the money from the tribe by marking them up.”

Cisneros said the Hopi Tribe realized its losses within the past six to nine months after thoroughly examining its investments. The Wachovia accounts now are with Raymond James & Associates, but they’re no longer in the hands of the advisers who went to work for Raymond James after Wells Fargo acquired Wachovia, Cisneros said.