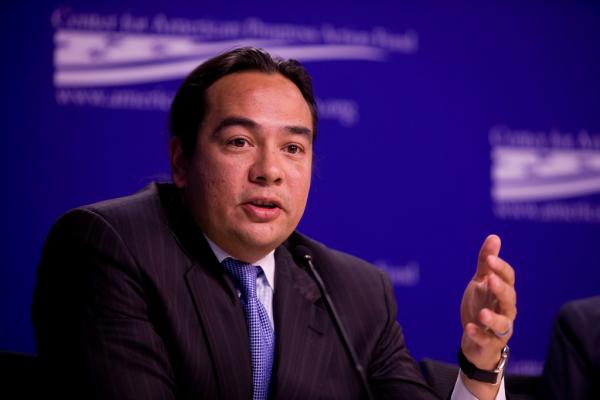 Wayland Gray, a Muscogee (Creek) Nation citizen and sacred site advocate, finds himself in a David versus Goliath-type situation.

Gray says he wants the U.S. Senate and the White House to hear his views against Keith Harper’s nomination to become a human rights ambassador with the United Nations, but he knows he is up against a major political machine.

“I know some of the powerful Native lobbyists are supporting Keith Harper,” Gray says. “But they shouldn’t have any more influence with Congress than grassroots Native people who have problems with his nomination.”

Harper, a Cherokee Nation citizen, is a lawyer with Kilpatrick Stockton who helped settle the Cobell lawsuit with the Obama administration, and he is politically well-connected to the administration, having worked as a transition team member, served on a presidential commission, and he was a major fundraiser for the Obama campaigns for president. Many Washington, D.C.-based lobbyist and lawyer associates of Harper, as well as tribal leaders who have had positive interactions with him and his firm, have weighed in to the Senate Foreign Relations Committee with support for his nomination.

Several indigenous human rights advocates, disenrolled tribal citizens, Cherokee Freedmen, Cobell settlement critics, and tribal leaders who oppose the nomination and who are not as well-connected as Harper find themselves in a precarious situation: How to get Congress to hear their voices when up against such an influential lobby?

Gray thinks the story of Hickory Ground’s sacred site desecration – and Harper and Kilpatrick Stockton’s representation in the matter – should speak volumes to senators who are considering the nomination. “Keith Harper’s firm has been defending the excavation of approximately 57 of our tribal ancestors who were dug up to build a casino,” he says, noting a long-standing source of conflict and sadness for Muscogee Creek citizens who have for years battled the Poarch Band of Creek Indians building and expansion of a casino on and near sacred burial grounds known as Hickory Ground in Alabama.

“I don’t see how Keith Harper can be an ambassador of human rights at the U.N. if he can’t even protect our sacred places and the burial sites of our ones who have passed,” Gray says. “The number one most important thing to Natives and to all humans is our burial places of our loved ones.”

RELATED: The Battle For Hickory Ground

Poarch Band leaders have said that they have taken “efforts to maintain the site” and want to “preserve a relationship with the Muscogee Nation,” but the inter-tribal battle escalated in February 2013 when Gray was arrested on terrorism charges by Poarch Band police as he and three others tried to access the sacred Hickory Ground site to pray for their Muscogee ancestors buried there. The Poarch Band has issued press releases saying Gray threatened to burn down the casino before his arrest. A grand jury has since tossed out the terrorism charge, but Gray is awaiting a jury trial on appeal to try to fully clear his name, based on religious freedom legal arguments, and having rejected a plea deal in June 2013.

As Gray was dealing with the fallout from his arrest, Poarch Band Chairman Buford Rolin was sending a letter to the Senate Foreign Relations Committee last year in support of Harper’s nomination that said Harper has served as “the tribe’s lawyer representing us in litigation critical to our community” and that the tribe has “a great deal of respect” for Harper and his work. Beyond his representation of the Poarch Band, Harper’s biography on his firm’s website says he has served on the tribe’s Supreme Court.

Brendan Ludwick, a lawyer for the Muscogee (Creek) Nation, says that Harper’s work for the Poarch Band is a “reason to be concerned” about his nomination.

After Gray’s arrest, Ludwick wrote an e-mail to Harper in February 2013 to ask for his assistance on the matter. “I reached out to him as a fellow Indian lawyer to see if he could bridge communications between our clients to secure Wayland’s release,” he says. “Keith never responded.

“This was a situation where we had a Native American exercising his First Amendment right to access a sacred place and was incarcerated because of the actions of his client,” Ludwick adds. “It was disappointing that he did not do more to help.”

Harper’s silence on various indigenous human rights issues has led to consternation about his nomination from many Native Americans and from Sens. John McCain (R-Arizona) and John Barrasso (R-Wyoming), vice-chair of the Senate Committee on Indian Affairs.

Ludwick, a citizen of the Kickapoo Tribe, hopes that more senators, on both sides of the aisle, will investigate the concerns. “The question is whether as a partner at the Kilpatrick law firm Keith Harper advised or profited from the desecration of the burials at Hickory Ground,” he says.

Robin LeBeau, a council member with the Cheyenne River Sioux Tribe, says there are scores of Native Americans fighting for human rights in Indian country who would be less controversial and better U.N. ambassadors than Harper. “I hope that Congress understands that this lawyer is not the best advocate for Indian country or human rights,” she says. “But there are not many politicians in Congress who stand with and for their people nowadays. Money talks.”

Mary Lee Johns, one of the four Native Americans who appealed the Cobell settlement and who was later a target of a harassment-inducing letter sent by the Cobell legal team in 2010, suggests that Natives who want to voice their opinions on this nomination should contact their senators, as the nomination will likely be considered before the full Senate very soon.

RELATED: A Public Letter From the Cobell Lawyers Prompts Ethics and Harassment Concerns

Johns already sent a letter last year to the Foreign Relations committee explaining her concerns about Harper, but his nomination still passed narrowly along party lines in early February, with all Democrats on the committee voting in favor of his confirmation. She has since sent a new letter to more senators, including Democrats Mary Landrieu of Louisiana, Heidi Heitkamp of North Dakota, Patty Murray of Washington, and Mark Begich of Alaska who she hopes will not view this as a partisan matter.

“The fact that he is an enrolled member of the Cherokee Tribe does not necessarily give him unusual powers of insight, empathy and commitment to the problems of oppressed people,” Johns wrote, addressing senators including Barbara Boxer (D-Calif.) who have pointed to Harper’s tribal citizenship as a top reason for supporting him.

It remains to be seen if the Senate will heed such arguments, but Gray says that if senators really listen and look at the scope of Harper’s character and commitments, they will come to the right conclusion.

“Right now it’s really important that Native Americans step up and contact their senators,” Gray says. “We need someone who is going to help us protect sacred places at the United Nations.”