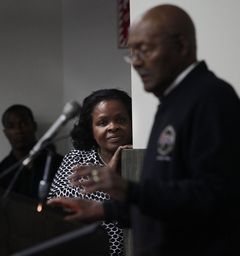 MLK’s ‘I Have a Dream’ legacy celebrated in shared memories

EVERETT — In poetry and song, proclamations, speeches and shared memories, the essence of Dr. Martin Luther King Jr.’s “I Have a Dream” speech was celebrated Wednesday night in Snohomish County.

An overflow crowd packed the Jackson Center at Everett Community College to hear leaders, young people and those who remember the struggles of the Civil Rights Movement reflect on King’s words, spoken in Washington, D.C., on Aug. 28, 1963.

County Executive John Lovick, noting that King’s birthplace of Atlanta has adopted the slogan “a city too busy to hate,” suggested a positive variation: “Snohomish County — a county that is not too busy to love.”

Two presenters were given standing ovations, one representing a new generation, the other an Everett elder, former City Councilman Carl Gipson Sr.

Gipson, first elected to the City Council in 1970, recalled harsh realities of his youth in Arkansas, when he wasn’t allowed into restrooms or restaurants. In Everett, he knocked on doors for a job, finally talking his way into one at a car dealership.

Gipson’s expressed gratitude to Everett Mayor Ray Stephanson for his efforts in naming the city’s senior center in his honor.

Many expressed a common theme, that King’s dream is not yet fully realized.

As they did for Gipson, the audience stood to applaud at the end of a poem recited by Rahwa Beyan, a 17-year-old leader of the youth chapter of Snohomish County’s NAACP organization. Her powerful recitation centered on the shooting death of black Florida teenager Trayvon Martin.

Lynnwood Mayor Don Gough spoke about a new “Let Freedom Ring” event earlier Wednesday in his city. Bells rang, and members of the public were given a minute each to say what King’s speech meant to them. Gough said social justice and civil rights “must meld with labor and worker rights.”

Shirley Sutton, of Lynnwood, read proclamations from her city, from Everett and Snohomish County officially recognizing the 50th anniversary of the march on Washington.

It was 1924, he said, before American Indians were granted the right to vote. Sheldon praised current leaders of local government for forging strong relationships with the Tulalip Tribes.

Angelina Karke, a student at Discovery Elementary School in the Mukilteo district, shared an ambitious dream of her own:

“My dream is to be accepted into Harvard Law School. I will get my law degree and become president of the United States,” the girl said