By Chuck Brooks, Contributor, The Hill

According to the most recent stats from the Pew Research Center, 11.7 million illegal aliens resided in the United States as of March 2012. To put that into perspective, there are 46 states that have a population less than 11.7 million. Fox News reported that from October 2013 to the end of May 2014, 162,000 people from countries other than Mexico have entered the U.S. across the southern border and 52,000 were unaccompanied children. This is approximately a 100 percent increase from the previous year and it is estimated that 150,000 minors might attempt to cross the border next year.

For this reason, illegal immigration, which has ties to drug smuggling and human trafficking, is continuing to get a lot of attention. In fact, according to Gallup, Americans recently cited immigration as the No. 1 issue in the U.S.; ahead of dissatisfaction with government, the general economy, unemployment/jobs and healthcare.

The cost of ignoring the problem and leaving our borders vulnerable is one that we cannot risk. The White House is unable to handle the growing issue and asked for $3.7 billion in emergency funding. Furthermore, thousands of troopers are being deployed to help protect our borders.While I believe that additional security funding is necessary, I also think there is a group that can help immensely and they should not be ignored: Native Americans.Gary Edwards, CEO of the National Native American Law Enforcement Association, states that there are 25 tribal reservations located on and/or across the U.S. borders with Canada and Mexico and 41 tribal reservations are within 100 miles of those international U.S. borders. Since Native Americans are around a large part of our borders, they are, and should continue to be, a part of our border security initiatives.

Cooperation between the Department of Homeland Security (DHS) and Native Americans has already played a significant role in our boarder security, especially in remote areas where drug smugglers and citizens try to enter the U.S. illegally. Today, more than 22,000 Native Americans serve in the Armed Forces and have the highest per capita serving in the military of any ethnic group protecting the homeland.

Additionally, the “Shadow Wolves” are Native American trackers who are part of the U.S. Immigration and Customs Enforcement. Since 1972, the Shadow Wolves have been tracking aliens and drug smugglers attempting to cross the border by looking for footprints, tire tracks, items snagged on branches, bent or broken twigs or even a single fiber of cloth. Their patrol area covers 2.8 million acres and officers estimate that recently they have seized an average of 60,000 pounds of illegal drugs a year.

U.S. Customs and Border Protection and the DHS need to remember the dedication, skill set and strategic geographical intelligence that Native Americans bring to the mix. In order to create a lasting relationship that utilizes their knowledge and aptitude, tribes must have complete access to intelligence and information pertinent to border security. This is something that the government needs to ensure because uninformed tribes will not be useful when protecting the homeland.

Brooks serves as vice president/client executive for DHS at Xerox. He served in government at the DHS as the first director of legislative affairs for the science & technology directorate. He also spent six years on Capitol Hill as a senior adviser to the late Sen. Arlen Specter (R-Pa.) and was adjunct faculty member at Johns Hopkins University where he taught homeland security and Congress. Brooks has an M.A. in international relations from the University of Chicago and a B.A. in political science from DePauw University. He is widely published on the subjects of innovation, public/private partnerships, emerging technologies and issues of cybersecurity. He can be followed on Twitter @ChuckDBrooks. 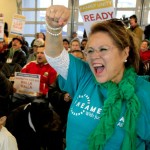 Immigrants and advocates on a multicity bus tour across the state calling for immigration reform hold a rally Wednesday at Casa Latina in Seattle. Lupe Sanchez, at right, from Yakima cheers with the crowd. Photo: Mark Harrison/The Seattle Times

With important victories on same-sex marriage, the gay-rights movement here in Washington and across the country is bringing new energy and momentum to another thorny social issue: immigration.

After the November election, gay-rights advocates — victorious in their fight for same-sex marriage in Washington — began planning their next strategic move.

Over the past decade they had landed other important victories, from outlawing discrimination based on sexual orientation and gender identity to winning domestic partnership benefits for gays.

Now lesbian, gay, bisexual and transgender (LGBT) advocates here in Washington and across the country are bringing new energy and momentum to another thorny social issue: immigration.

In a way, their involvement is one of reciprocity — an acknowledgment of the broad support by immigrants of same-sex marriage last November. But it also reflects the overlap of two big political movements with shared constituents, whose struggles have often been cast in terms of human and civil rights.

An estimated 5 percent of undocumented immigrants are believed to be lesbian, gay, bisexual or transgender, and tens of thousands of gay Americans have foreign-born partners.

“What we know is that marriage equality and anti-discrimination do not meet all the needs of our diverse community — that one of our most vulnerable communities is the immigrant community,” said Josh Friedes, longtime spokesman for Equal Rights Washington, a gay-rights advocacy group.

“We are committed to the idea that no aspect of the LGBT community be left behind.”

While gay-rights organizations in the past have been involved in the long-debated effort to fix the nation’s immigration laws, the intensity of their engagement on all levels this year is unprecedented.

Here in Washington state, most major gay-rights groups have a seat at the Washington Immigration Reform Roundtable — a loosely formed coalition of religious, labor and social-justice groups working to influence the outcome of the immigration-policy overhaul under way in Congress.

Rich Stolz, executive director of OneAmerica, one of the state’s largest immigrant-advocacy groups and a lead organization on the Roundtable, said the gay-rights groups bring an important perspective, as well as broad grass-roots support and advocacy to the decades-long conversation around immigration.

“There are so many parallels and crossovers in the LGBT and immigrant movements,” said Kris Hermanns, executive director of the Pride Foundation.

“The way we worked together around marriage equity deepened the understanding and trust in the relationship.”

“We’re seeing a significant alliance between the two communities that will not just be helpful for immigration reform, but that will hopefully continue beyond that,” said Steve Ralls, spokesman for Immigration Equality, a national group that focuses on LGBT immigration issues.

A lot at stake

But this isn’t just about payback.

In the first major rewrite of the nation’s immigration laws in a generation, the gay-rights movement also has a lot at stake.

An estimated 30,000 to 40,000 same-sex couples would benefit directly from changes in the immigration laws to allow gay Americans to sponsor their foreign-born partners for lawful residency — a benefit now enjoyed only by straight couples.

And of the estimated 11 million undocumented immigrants in the U.S., about 600,000 are LGBT, including an untold number of young people brought to the U.S. illegally as children.

“We are keenly aware that many LGBT undocumented people come to America out of necessity and are being penalized for simply trying to survive and live with the dignity we here take for granted,” Friedes said.

And gay-rights advocates are bringing more than just momentum — they’ve also put money on the table.

A coalition of three dozen national advocacy groups, including the Pride Foundation and the Gay City Health Project, established a $100,000 fund to help young LGBT undocumented immigrants pay the application fees for a federal program, which grants them relief from deportation and issues them a work permit.

Carlos Padilla, an undocumented immigrant student and sophomore at Seattle Central Community College, has been advocating for immigration changes since he was a sophomore in high school.

But Padilla said it wasn’t until his freshman year in college that he felt he could also disclose that he is gay.

He not only sees the parallels between the two communities, he lives them.

In his presentations before students and others, he said, “I’d talk about being gay and get these blank stares. Now when I talk about it in terms of human rights, being able to have equality, it makes sense to people. People are now connecting the dots and seeing the connections.

“LGBT people and undocumented people are fighting for acknowledgment and acceptance in society.”

While bipartisan, the effort to overhaul the nation’s immigration laws is expected to be a political dogfight, with the centerpiece of any legislation likely to include legalization for undocumented immigrants.

Any measure is also expected to include provisions to ease immigration restrictions on highly skilled workers; beef up border security and clear up immigration backlogs to allow family members to be reunited.

Immigration benefits for gay couples have been included in proposals set forth by President Obama, with some Democrats and gay-rights advocates — including those on the Washington Immigration Reform Roundtable — also pushing for them to be included.

But some Republicans have warned that provision could derail or at least hang up legislation that already promises to be divisive.

That same concern has also been raised by some of the more conservative faith-based groups at the Roundtable, which fretted over signing a letter to the Washington congressional delegation that listed benefits for LGBT families among the provisions they want to see in an overhaul bill.

Stolz of OneAmerica said the list of provisions are ones that the group overall could support, though, given the political sensitivity, “We understood that not everyone is prepared to sign onto the letter at this time.”