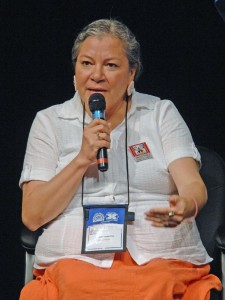 The 39 page lawsuit pertains to the lack of adequate hearings when American Indian children are removed from their familial home.

In one case cited in the lawsuit, one custodial hearing lasted a mere 60 seconds. American Indian parents were not even allowed or permitted to see the court papers. The judge signed the documents to remove the children within in seconds.

The case has been in the making for months as American Civil Liberties Union attorneys reviewed the circumstances surrounding the procedures used in the Pennington Court system.

“This case is not about numbers, this case is about the procedural fairness,”

“This lawsuit seeks to put an end to disgraceful and unlawful practices that unfortunately have been standard practice in Pennington County, South Dakota, for a long time.”

Signs say it all

Outside of the Andrew W. Bogue Federal Building in Rapid City, American Indians began to gather to protest shortly before 9:00 am. Facing brisk temperatures on the second day of spring that were in the low 20s, some 100 tribal members stood outside the federal building as the attorneys and Oglala Sioux Tribe President Bryan V. Brewer, Sr. went inside to file the lawsuit.

“This is the first step. Our children have been abused for far too long,”

stated President Brewer outside before he went into the federal building to file the lawsuit with American Civil Liberties Union attorneys.

“ This has to stop, we will not tolerate this any longer. Today is a historic day.”

People carried signs that read: “Protect our children from the state” and “No more exploitation of Indian children.”

Several tribal members were visibly upset as they took the microphone to tell their stories of how children were removed from their homes without due process by county or state of South Dakota officials.

Mary Black Bonnet, 38, a tribal citizen of the Rosebud Sioux Tribe, spoke about being removed from her family when she was only 18 months old and adopted by a non-Indian family and ended up in Niles, Michigan.

referring to her natural, American Indian family. As she spoke, her daughter clung to her.

Some of the attendees discussed how the state of South Dakota and Pennington County officials have ignored the Indian Child Welfare Act, ICWA, that was passed by Congress in 1978 in response to the large number of American Indian children who removed from their homes in at disproportionate rates.

“This hits the heart of our tribe. With this lawsuit we want to see our rights that ICWA should guarantee to us. Pennington County is violating our rights,”

“I had to witness the actual filing of this lawsuit. This is so historic,”

said Sheris Red Feather, whose son, Patrick, committed suicide while in the custody of the State of South Dakota when he was 15.

She went upstairs of the federal building to watch the filing of the lawsuit at the federal court by the lawyers and President Brewer.

Tribal Councilors Robin LaBeau and Robert Walters of the Cheyenne River Sioux Tribe attended the event to demonstrate the support of their Tribe to the lawsuit.

“We are here to support this lawsuit 100 percent. It comes down to our support of all Lakota children,”