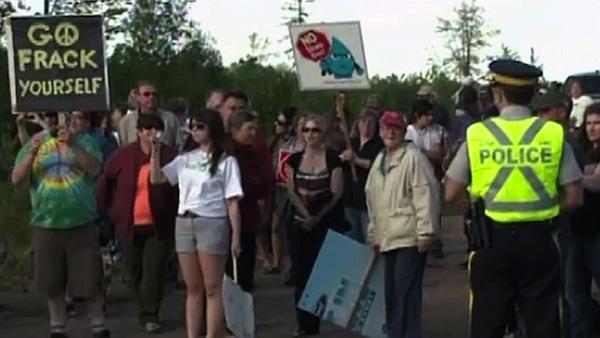 One week after 12 fracking protesters were arrested in New Brunswick, Mi’kmaq critics of the controversial extraction industry relit their sacred fire on the road to a seismic testing site and vowed to continue their opposition.

On June 19, fracking opponents held a sunrise ceremony beside a ceremonial fire they said was extinguished during the arrests, which included seven indigenous protestors, among them a pipe carrier and a ceremonial firekeeper. Another 12 people were arrested on Friday June 21, National Aboriginal Day.

“We’re not going to stop,” Amy Sock, a member of Elsipogtog First Nation, told Indian Country Today Media Network. “We don’t want shale gas to come to New Brunswick. To be honest, we have a big nuclear plant here. Once fracking goes on—once we start getting earthquakes—I’m afraid that thing is going to blow up. That’s one of my fears. Our priority is Mother Earth.”

Sock said that despite some tribal leaders’ support for shale gas exploration by SWN Resources Canada, which is preparing for seismic testing in Kent County, most Mi’kmaq are against the project. Fracking, or hydraulic fracturing, is a process in which high-pressure chemicals are injected deep underground to break apart the shale rock layer and pump oil out. Government studies in the U.S. and U.K. have concluded the process can cause earthquakes, but proponents argue that they are not significant or dangerous tremors. (Related: Fracking Suspected in Dallas-Area Earthquakes)

“I can cry, get mad, pray, forgive, and do my pipe ceremony to keep my strength and courage up,” Sock said, “but this is one tough battle. We live by the river… Our regular diet—fish, clams, eels, bass, salmon, and lobster—that’s what we eat. I want to continue eating that without getting sick [from pollution].”

The Assembly of First Nations (AFN) also issued a statement after the arrests, saying it supported band leaders who were working with government and industry for “responsible and sustainable natural resources development for the benefit of all in the province,” but did not mention the protests or arrests.

“We stand in full support of the New Brunswick First Nations leadership as they are asserting and protecting their rights on natural resource development for the future and betterment of their communities,” said National Chief Shawn A-in-chut Atleo. “As stewards of the land, First Nations have a sacred duty to protect the lands, waters and vital resources bestowed upon them. It is our responsibility to fulfill the vision of our ancestors—a vision of shared prosperity and success for all our peoples. This requires supporting First Nation governments in driving their own economies and engaging meaningful business opportunities and partnerships, through the basic and standard principles of free, prior and informed consent. This is the road to productivity and prosperity for all of us.”

A warrior chief of Elsipogtog First Nation, John Levi, issued a call for support from other Natives.

“We’re fighting with SWN gas company, which is doing seismic testing here in New Brunswick,” he said. “We invite all the reserves to come support our cause, because if it comes to your province, we’ll be there, we’ll support you. We’re asking for your help now.”

Sock said that every day, non-Native supporters have come to the protest site with gifts of food and other supplies, and also brought in portable toilets. She said many residents in the region are farmers as concerned as First Nations about fracking’s impact on the environment.

On June 24, two SWN company shot-hole drillers involved in gas exploration were set ablaze. No charges have been laid in the arson. Several other pieces of SWN equipment were seized by gas opponents.