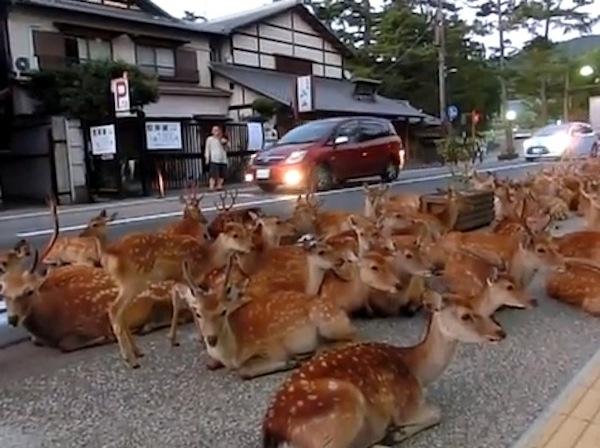 Blockades have been in the news lately, given indigenous resistance to fracking and other industrial invasions around Turtle Island.

But a different sort of blockade is happening across the Pacific at the tranquil Nara Park in Japan, about 300 miles southwest of Tokyo. It’s a deer park, meaning it is filled with gardens and deer—the Sika deer, Cervus nippon to be exact, also known as the Japanese deer—that are spotted and thus appear fawnlike.

“The park is home to hundreds of freely roaming deer,” according to the website Japan-Guide.com. “Considered in Shinto to be messengers of the gods, Nara’s nearly 1,200 deer have become a symbol of the city and have been designated a natural treasure.”

Shinto, the site explains, means “the way of the gods” and is the indigenous faith of the Japanese people, “as old as Japan itself.” It and Buddhism are the main religions in the country today.

Visitors can buy little crackers to feed the deer. Though the animals can get feisty if they think you’re about to hand over a cracker, they are for the most part tame, the site says, even bowing when offered food, as the website Kotaku.com notes.

In August the deer staged a sit-in of sorts on the road that bisects the park.