Kelly Rudd, the Northern Arapaho attorney, said the agency’s interpretation could subject the tribe to more than $1.5 million in tax penalties if its business entities, including Wind River Casino, do not offer employer-sponsored insurance.

He said the tribe insures employees with plans from the federal health insurance marketplace and pays 80 percent of the premium costs.

Those policies provide better coverage than the tribe could purchase independently, Rudd said.

Attorneys for the U.S. Department of Health and Human Services say the rule-making is based on Congress’ intent to promote employer-sponsored health coverage under the ACA.

Jacek Pruski, a U.S. Department of Justice attorney, told the court that the IRS rule-making is in compliance with the purpose of the ACA.

He said the court should reject the motion to block enforcement of the rule because the tribe did not establish the strength of its case based on prior case law.

Rudd said the U.S. Department of the Interior is charged with overseeing tribal health care programs. He said the IRS did not communicate with the Interior Department while drafting the rule.

“Basically what we have is a left-hand-right-hand problem in communication among agencies,” Rudd said.

U.S. District Judge Scott W. Skavdahl said he would need more time to deliberate on the suit because of the complicated nature of the Affordable Care Act.

“This is the statute that cast a thousand lawsuits,” he said.

Skavdahl said he would release his decision in the coming weeks.

On November 15, 2013, the Internal Revenue Service published a notice of proposed rule making (NPRM) along with proposed regulations regarding the treatment of certain income derived from Indian fishing rights-related activity when it is contributed to a qualified retirement plan such as a 401(k) or other employer-sponsored pension plan. The notice can be viewed at https://www.federalregister.gov/articles/2013/11/15/2013-27331/treatment-of-income-from-indian-fishing-rights-related-activity-as-compensation. The proposed regulations clear one of the current hurdles to including employees of an Indian fishing rights operation in a typical employer-sponsored retirement plan, such as a 401(k) plan. Unlike most types of employee compensation, Indian fishing rights-related income is exempt from both income and employment taxes under Internal Revenue Code (IRC) Section 7873(a)(1) and (a)(2). Therefore, Indian fishing rights-related income is not included in a taxpayer’s gross income. The IRS has traditionally taken the position that in order to make a contribution to an individual retirement account (IRA) or a 401(k) plan, an individual must have “compensation” that is included in gross income. The proposed regulations clarify that payments received by Indian tribe members as remuneration for services they perform in fishing rights-related activities will not be excluded from the definition of “compensation” for purposes of IRC Section 415 and underlying regulations, merely because such payments are not subject to income or employment taxes. Consequently, the proposed regulations allow employees receiving such payments to participate in and contribute to a retirement plan qualified under IRC Section 401(a).

The Tea Party is not the only entity that’s come under improper scrutiny by the Internal Revenue Service. Over the past several years, tribal governments have been targeted for audits by a government entity that was set up to help them understand and comply with applicable tax laws. Instead the IRS’s Indian Tribal Governments office has initiated audits and other compliance check activities throughout Indian country that tribal leaders say not only violate tribal sovereignty, but are discriminatory, harassing, and almost always fail to find any tax abuse.

The IRS scandal surrounding the Tea Party came to light in May when the Treasury Department Inspector General issued an investigation report revealing that the IRS had singled out groups with conservative-sounding words such as patriot and Tea Party in their titles when applying for nonprofit tax-exempt status. The story was all over the mainstream media. Not so much about the IRS targeting tribal governments. Oglala Sioux Tribe President Bryan Brewer noted the difference. “When the IRS gores the Tea Party Ox, heads roll.  When Indians are targeted, the mainstream press takes a nap. It’s time for Congress to Act!” Brewer told Indian Country Today Media Network. 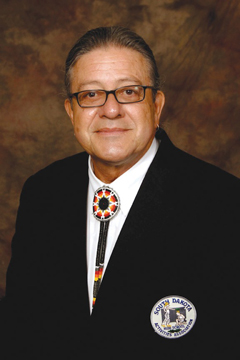 In June tribal leaders acted. They came together at the National Congress of American Indians’ mid-year conference and passed a resolution for legislation that they hope will stop the audits and clarify the status of sovereign tribal nations with governments that are as tax exempt as states and other nations.

Their effort could not be more timely. Senate Finance Committee Chairman Max Baucus (D-Montana) and ranking member Orrin Hatch (R-Utah) are preparing major tax reform legislation – an overhaul of the Internal Revenue tax code that hasn’t happened for 30 years. The two legislators floated what’s been called a “blank slate” approach to reform. “We plan to operate from an assumption that all special provisions are out unless there is clear evidence that they: (1) help grow the economy, (2) make the tax code fairer, or (3) effectively promote other important policy objectives,” Baucus and Orrin wrote to their Senate colleagues June 27.

But the blank slate approach doesn’t fit tribal nations. In the NCAI resolution, tribal leaders insist that treaty rights, the federal government’s trust obligations to Indian tribes, the Constitution’s acknowledgment of Indian tribes as governments, and the role played by Indian tribal governments in serving their citizens are the overarching principals that must guide tax reform issues in Indian country.

“Support for Legislation to Amend the Internal Revenue Code to Respect the Sovereignty of Indian Nations to Govern and Promote the General Welfare of Tribal Citizens and to Protect Our Homelands” is the name of the resolution and, according to sources who attended the conference, there was a lively debate over the tone and strength of the language. The final version that passed is a strongly worded document that recalls the constitutional recognition of Indian nations as sovereigns with rights of self-determination and self-government over tribal citizens and tribal territory and tribal nation citizens as “Indians not taxed.” It calls on Congress to pass legislation to clarify that tribal government programs, services, and benefits authorized or administered by Indian nations and tribes for tribal citizens, spouses, dependents, and others as determined by the tribal governments, are excluded from income under the General Welfare Exemption (GWE). The resolution seeks legislative clarification that “items of cultural significance or cash honoraria provided by tribal governments to tribal citizens for cultural purposes or cultural events shall not represent compensation for services and shall be excluded from taxable income.”

John Yellow Bird Steele, former Oglala Sioux Tribe president, told the Senate Committee on Indian Affairs at a hearing last year just how menacing and intrusive the Internal Revenue Service had become across Indian country. IRS agents have been showing up unannounced on reservations, as they did on the Oglala Sioux’s Pine Ridge Reservation, to conduct audits of tribal governments’ expenditures that have not been and never should be subject to taxation – things like health care and education benefits, utility and housing assistance, even powwow prizes and funeral expenses, he said.

In his testimony Steele described the IRS agents’ disrespectful behavior at length, but it is perhaps best characterized by a single sentence. “When one tribal member raised objections to IRS intrusion based on tribal treaty rights, he was told, ‘You can read your treaties in prison, if you like,’” Steele told the committee.

As the Senate Finance Committee works to complete the tax code overhaul by the end of next year, others are taking a broad approach to tax code reform. “We need to think bigger and bolder,” said Tom Rodgers (Black Feet Nation), lawyer-lobbyist-owner of Carlyle Consulting. “This is tax reform which comes along every 30 years. This is not an annual tax bill.” While the NCAI resolution pursues legislation to clarify the tax exempt status of tribal governments, Rodgers is working on legislation for Indian country empowerment zones that he says will incorporate and benefit both poor tribes and tribes with financial resources. “If you are to be taken seriously in tax policy you should provide revenue offsets for tax expenditures. I have identified one that is empathetic, moral and ethical, which is somewhat ironic given we are dealing with tax policy,” Rodgers said. He said he will roll out the details of his plan over the next month or so as they are finalized. Meanwhile, the tax reform efforts in the Senate are moving along briskly, Rodgers said.”The tax option papers have been written and released, almost all tax writing committee hearings have been held, the one-on-one chairman and senator meetings are taking place. The question now is whether the politics will line up with the policy.”