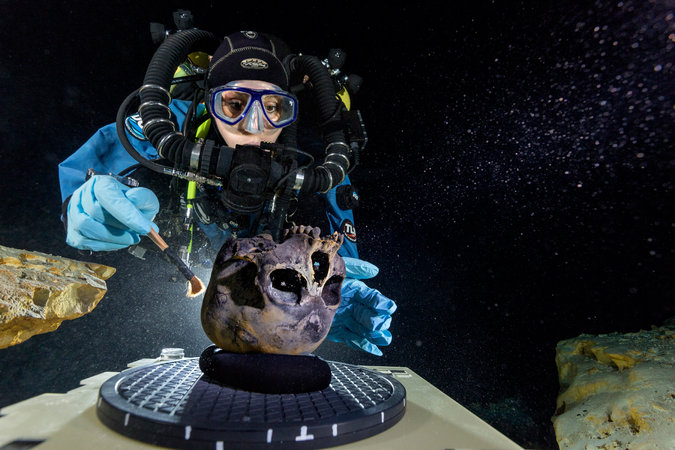 Most geneticists agree that Native Americans are descended from Siberians who crossed into America 26,000 to 18,000 years ago via a land bridge over the Bering Strait. But while genetic analysis of modern Native Americans lends support to this idea, strong fossil evidence has been lacking.

Now a nearly complete skeleton of a prehistoric teenage girl, newly discovered in an underwater cave in the Yucatán Peninsula, establishes a clear link between the ancient and modern peoples, scientists say.

Writing in the journal Science, the researchers report that they analyzed mitochondrial DNA — genetic material passed down through the mother — that was extracted from the skeleton’s wisdom tooth by divers. The analysis reveals that the girl, who lived at least 12,000 years ago, belonged to an Asian-derived genetic lineage seen only in Native Americans.

Though her skull, found intact, is more narrow and angular than those of modern Indians, and her face smaller and her features more protruding, “we know that at least the maternal ancestry is shared,” said an author of the study, James Chatters, a forensic anthropologist with Applied Paleoscience, a company in Bothell, Wash.

The reasons for the differences in skull size and shape are still a mystery, but modern American Indians may have evolved to have broader, larger skulls because of adaptations to different food, social or environmental conditions, Dr. Chatters said.

Angélique Corthals, a forensic anthropologist at the State University of New York at Stony Brook, who was not involved with the study, said the find was “very exciting” because it was a full skeleton.

“That’s really rare,” she continued. “They’ve been able to retrieve so much of the mitochondrial DNA; that’s what makes it monumental.”

They now hope to retrieve nuclear DNA to determine paternal ancestry and study the skeleton to understand the teenager’s health history, diet and body structure.

But that will have to wait: For now, the skeleton remains in the cave.

“Ultimately we’re going to have to retrieve her,” Dr. Chatters said. 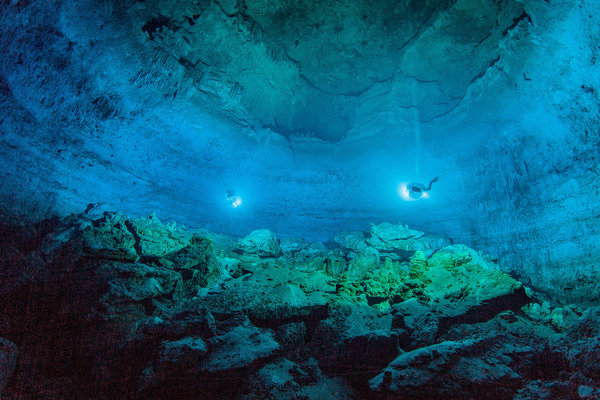 A view of Hoyo Negro, a submerged cave in the eastern Yucatán Peninsula in Mexico where the prehistoric girl’s skeleton was discovered. Credit Roberto Chavez Arce, via Science, via Associated Press

An earlier version of a picture caption on the home page for this article misidentified one of the groups of people that scientists say are linked by a prehistoric skeleton. They are modern American Indians and Siberian ancestors who crossed the Bering Strait, not Siberian descendants.