Golfers and other visitors to the Salish Cliffs Golf Course on the Squaxin Island Indian Reservation are greeted by two Coast Salish totem poles that frame sweeping, territorial views of the Kamilche Valley. 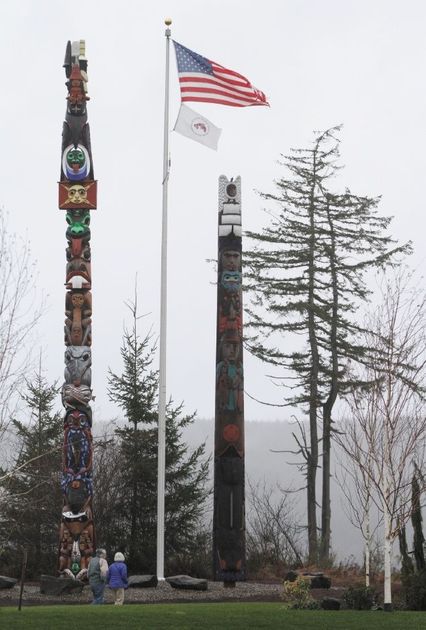 A welcome pole, right, originally carved for the Port of Olympia 15 years ago, has found a home at the Salish Cliffs Golf Course on the Squaxin Island Indian Reservation, shown Friday.
TONY OVERMAN/STAFF PHOTOGRAPHER

The shorter — 36 feet — and less colorful carving is a welcome pole that has a long and contentious history, dating to 1997 when the Port of Olympia contracted with Squaxin Island tribal member, carver and fisherman Doug Tobin to carve a totem pole for the port’s new Port Plaza on the shores of Budd Inlet.

Along the way to completion, the pole’s fate became entangled in Tobin’s past, which included a manslaughter rap in a 1986 murder-for-hire scheme that took the life of Olympia’s Joanne Jirovec.

I visited the welcome pole this week with Russ Lidman, a retired Seattle University professor, Olympia resident and president of Temple Beth Hatfiloh.

Lidman for years used the welcome pole case history as a teachable moment for students in the university’s master’s program in public administration. A retrospective review of the case looks like a television drama co-starring whipsawed port commissioners, a port director torn in several directions, angry citizens, the local newspaper that early on gave the story less attention, and a talented Native American artist, who happens to be a habitual criminal.

“It’s a really good case study from the point of view of public administration,” Lidman said. “Real screw-ups like this require a lot of actors dropping the ball.”

• The Port of Olympia in the 1990s lacked a transparent, formal process for spending money on public art. They settled on Tobin to carve a Coast Salish welcome pole for the Port Plaza without fully vetting the artist’s criminal background or considering the potential for backlash from friends of Joanne Jirovec.

• The Olympian didn’t write in detail about the contract, or the artist and his criminal past, before the contract was signed. If I remember right — and I covered the port at the time — the newspaper, along with port officials and Squaxin Island tribal leaders, figured Tobin had served his time — albeit less than six years — on the manslaughter charge and deserved a second chance.

• Tobin, who had plenty of help carving the pole — he did only about 15 percent of the work — missed his contract deadline of February 1998 and didn’t complete the pole until 2000. Months would go by without any work performed on the pole. He missed deadlines for performance payments spelled out in the contract, but port officials figured there would be more to lose than gain by canceling the contract.

Later, it became clear why Tobin fell so far behind. While Tobin was under contract to the port, he was also the ringleader of a major geoduck and Dungeness crab poaching ring in South Puget Sound.

• The back of the pole needed to be hollowed out and strengthened with a beam and structural supports to keep it from cracking. It sat enshrouded in a port warehouse for another two years.

That gave state and federal fish and wildlife enforcement officers time to build their poaching case against Tobin, someone they had used as an undercover informant for years before they knew the full extent of his own criminal enterprise.

In February 2002, the port was close to erecting the welcome pole. But on March 18, Tobin was arrested for the theft of geoducks valued at $1.2 million. In 2003, he received a 14-year prison term, nearly twice his sentence in the Jirovec case, and the stiffest poaching penalty in state history.

Soon after the news of Tobin’s arrest broke, friends of Joanne Jirovec descended on the port, demanding that the port scrap its plans to erect the pole to welcome people to the Olympia waterfront. They called the plan an insult to the memory of the slain woman.

• The Port Commission appointed a six-member citizens panel for advice. The panel voted 4-2 to install the pole, but the port commissioners, feeling the heat from the friends of Jirovec, ignored the recommendation.

Port Executive Director Nick Handy tried to sell the pole to the Squaxins, but they declined. Eventually the pole was sold for $30,352 in 2004 to a Seattle art collector, who in turn donated it to the Burke Museum of Natural Culture and History at the University of Washington.

Museum officials initially planned to erect the pole on the university campus, but they, too, deferred action. As the pole sat in limbo, Squaxin tribal members scrubbed every inch of the pole with spruce boughs to cleanse it of any negative energy associated with its past.

In 2005, the museum’s Native American Advisory Board recommended that museum officials contact the Squaxin Island Tribe to see whether they would like to borrow the pole.

The pole sat in storage at museum for several years. Finally, in 2011, the tribe and the museum entered into a 99-year loan agreement, which is reviewed every two years. The tribe brought the pole to the reservation and added it to the entrance to its new golf course.

The welcome pole and adjoining totem pole stand alongside a flag pole that flies both Old Glory and a Squaxin Island tribal flag. There are no inscriptions or plaques describing either pole’s story.

Tribal council member Ray Peters talked to me briefly Thursday about the welcome pole. I think he’d rather talk about the award-winning golf course. But he did shed a little light on the tribal council’s decision to embrace the pole.

“The pole isn’t Doug Tobin’s pole,” Peters said. “A lot of notable artists had a hand in carving and designing the pole.”

Several people familiar with the pole said they were glad it finally found a home, including former Secretary of State Ralph Munro, who served on the port advisory committee all those years ago, and voted to erect the pole at the Port Plaza.

“I’m glad to see the pole up,” he said. “For some people it evokes bad memories, but it’s a beautiful piece of Squaxin art that has inspired a lot of young tribal carvers.”

“I’m glad it’s away from the university,” said Barbara Brecheen a good friend of Jirovec, upon learning the fate of the pole. “I’m surprised the tribe wanted it, but I guess it makes sense.”

I’ve thought long and hard about this column ever since I learned what happened to the welcome pole. I’ve come to the conclusion that the public has a right to know what happened to it. Public money was used to carve it. I’ve also concluded it’s time to separate the art from the artist, to let the art have a life of its own.