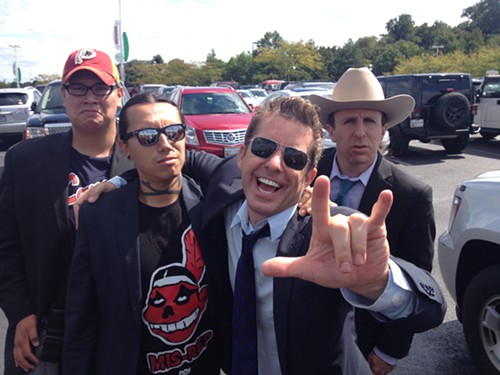 Editor’s note: Last night “The Daily Show” aired a segment about Washington’s controversial football team nickname. The segment included the 1491s, a Native American comedy troupe the Indy has profiled and which includes Migizi Pensoneau, who lives in Missoula and contributes regularly to the paper. Migizi wrote the following behind-the-scenes account of the segment and how it came about.

A couple of weeks back, the 1491s got an email from a producer at “The Daily Show” hosted by Jon Stewart. They were recruiting for a panel discussion regarding the Washington Redskins, and the mascot controversy that surrounds the team. And they wanted us—a Native American sketch comedy/video group that tackles everything from Indian Country politics to fart jokes—to weigh in. As a writer, educator, satirist and smart-ass, I was excited about the opportunity. While we love the reach that YouTube, Facebook, Twitter and other Internet avenues provide, there’s something bewitching about being on national TV, and on a show we respect.

Less than a week after we got the email, three members of our group—including me—were whisked away to our nation’s capitol for two full days of shooting. The morning after we arrived, a Saturday, we learned more about the premise of the shoot. There would be two panels: pro-Redskins fans (as in, pro-mascot, pro-dressing up as Indian, anti-name changers) and anti-mascot activists, which included the three of us joined by five other indigenous panelists. The plan was to let the first panel make their case: talk about how the mascot honors Natives, that the name “Redskins” only refers to fans of the team and not Native Americans—standard pro-mascot arguments. Then, at a designated point, the host, Jason Jones, would ask, “Would you say all of this stuff directly to a Native American?” To which they’d presumably say, “Yes,” and then Jones would cue us to enter. The panel would be embarrassed, we’d be indignant, they’d be on their way—appropriately uncomfortable—and then we’d get our chance to talk.

After a long wait in an adjacent green room, completely cut off visually and aurally from the pro-Redskins panel, we were finally asked in. We entered the room, looked indignant, and there was a wonderfully uncomfortable silence. Jones played the buffoon, eating some wings and drinking a beer. But then, one of the pro-mascot fellas started to defend their position, and everything derailed. This is the part you don’t really see in its full glory on the segment: As some of the anti-mascot activists started in passionately on the issue, pro-mascot panelist Kelli O’Dell, who was previously employed by the Washington Redskins and whose Internet presence is devoted to her support of the team and mascot, started to cry. My ever-dapper 1491s colleague, Bobby Wilson, offered her his own handkerchief. It was an intense situation, but never mean-spirited. O’Dell, though, started to accuse us of ambushing and lying and “how dare you.” (Later, after the shoot but before the episode aired, it would be reported by the Washington Post, Huffington Post, Time, Gawker, Uproxx, Buzzfeed and CBS that she felt in danger and this experience would smear her name.)

Sobbing and accusatory, she and the others left. From there, we took a break to reset the room, and we did our panel. This one went incredibly well and I’m proud to have been a part of it. The producer, crew and Jones were wonderful to us, and we all walked out of there with hugs and smiles. It was 180 degrees from the previous panel, and we were happy about it.

The next morning, football Sunday, the three of us went to FedEx Field as part of the show. “The Daily Show” taped us wandering around the “Redskins Nation” tailgate, though that never made it on air. I, rather naively, thought maybe we’d be able use our presence at the tailgate as a way to showcase our humanity, and let the Washington Team know that there are Native Americans out there who are among them—real people not relegated to the eternal myth of history. Maybe we’d change a mind or two. Or, at least, maybe some ignorant hilarity could be caught on camera. It was worth a try, so with a camera crew following us, one little, two little and a third big Indian struck out into FedEx Field’s Redskin Nation tailgate.

That did not go as I’d hoped.

There were points during that hour-long experience where I actually was afraid for my life. I have never been so blatantly threatened, mocked or jeered. It was so intense, so full of vitriol that none of the footage ended up being used in the segment. I’m a big dude—6’1”, and a lotta meat on the bones. But a blonde little wisp of a girl completely freaked me out as I waited in line for the bathroom. “Is that shirt supposed to be funny?” she asked motioning to my satirical “Caucasians” T-shirt. And then she said, “I’ll fucking cut you.” Actually, she didn’t scare me so much as the wannabe linebackers standing behind her who looked like they wanted to make good on her threat.

On one level, I get it. I’m walking around with an ironic T-shirt on, being a Native in the middle of FedEx Field with a camera crew from “The Daily Show” nearby. But amid the jeers, mocking and threats, did I cry, and accuse them of ambush? No, because I knew what I was getting myself into. It’s “The Daily Show.” I know the format. More than that though, I didn’t back down or break down because I knew in my heart and conscience I was doing the right thing, as silly as the method may have been.

I think back to the tailgate: the man blowing cigar smoke in my face, the man who mockingly yelled, “Thanks for letting us use your name!”, the group who yelled at us to “go the fuck home,” the little waif who threatened to cut me, the dude who blew the train horn on his truck as I walked by the hood. I think of all of that, and I think back to O’Dell crying and trying desperately to get out of the room full of calm Natives. I thought she was crying because she was caught unawares and was afraid. But I realized that was her defense mechanism, and that by overly dramatizing her experience, she continued to trivialize ours. It was privilege in action. And as I realized these things, something else became incredibly clear: She knew she was wrong.