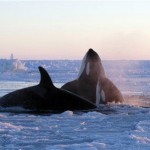 Marina Lacasse / Canadian Press
Killer whales surface through a small hole in the ice near Inukjuak, Northern Quebec, on Tuesday.

MONTREAL — A community in Quebec’s Far North is calling for outside help to free about a dozen killer whales trapped under a vast stretch of sea ice.

Locals in Inukjuak said the mammals have gathered around a single hole in the ice — slightly bigger than a pickup truck — in a desperate bid to get oxygen.

Mayor Peter Inukpuk urged the Canadian government Wednesday to send an icebreaker as soon as possible to crack open the ice and help them find open water. The Department of Fisheries and Oceans said it is sending officials to assess the situation.

“Fisheries and Oceans Canada is assessing the situation and are exploring every possible option, but will only be in a position to determine what – if anything – can be done once our specialists arrive on site,” spokesman Frank Stanek said in a statement.

A hunter first spotted the pod of about a dozen trapped whales Tuesday at the hole, which is on the eastern shore of the Hudson Bay. Inukjuak is about 1,500 kilometers (900 miles) north of Montreal.

Dozens of villagers made the one-hour snowmobile ride Tuesday to see the unusual spectacle. They snapped photos and shot video footage of the killer whales surfacing in the opening — and even thrusting themselves skyward while gasping for air.

One woman who made the journey to the gap in the ice said even a curious polar bear approached the hole amid the commotion. Siasie Kasudluak said the bear was shot by a local hunter for its meat.

The trapped orcas appeared to be in distress, but locals were ill-equipped to help out.

Kasudluak said the hole appeared to be shrinking in the freezing temperatures. Inukpuk believes the sudden drop in temperature recently caught the orcas off guard, leaving them boxed in under the ice.