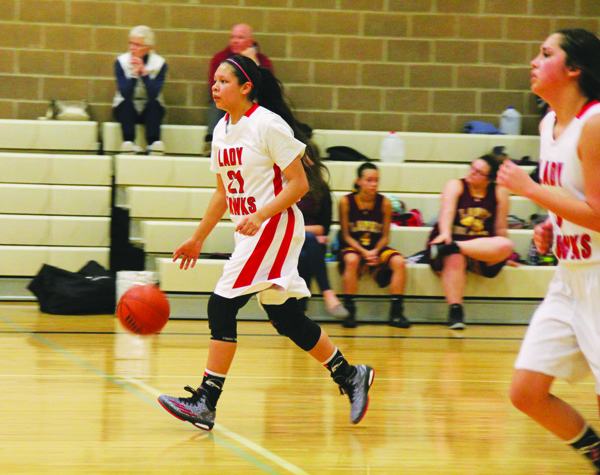 The Tulalip Heritage Lady Hawks (0-9) hosted the Lopez Island Lobos (4-2) on Tuesday, January 6. This would be the second meeting of the season for these two teams; the first was played at Lopez Island where the Lobos won 56-20.

From the opening possessions it was apparent that the Lady Hawks would be in for a very challenging game. The Lobos were applying a full court defense and double teaming guard Michelle Iukes, the team’s offensive leader, whenever she would bring up the ball. Moving the ball with accuracy when they are going against heavy ball pressure has been a season long struggle for the Lady Hawks. For what seemed like the entire 1st quarter the Lady Hawks were under duress trying to move the ball against the Lobos press defense. When the quarter came to an end the Lady Hawks had committed 15 turnovers and were trailing 0-20.

In the 2nd quarter the Lobos ball pressure continued to frustrate the Lady Hawks. The turnovers continued to come as errant passes were resulting in easy buckets for the Lobos. Coach Cyrus “Bubba” Fryberg called a timeout to tell his players to focus on executing good solid, chest passes and that the offense would immediately get better once they started making better passes. Shortly thereafter guard Myrna Red Leaf scored the first Lady Hawks bucket of the game, with an assist from center Nina Fryberg. The passes were improving but the quick handed Lobos guards were still finding ways to come up with steals, forcing 10 Lady Hawk turnovers in the quarter. Going into halftime the Lady Hawks trailed 2-37.

During the halftime intermission the Lady Hawks were urged to not pay attention to the scoreboard. Even though they were trailing the focus would be getting better as a team and making better passes. Defensively they were urged to hustle, hustle, and hustle.

The 3rd quarter was a total team effort by the Lady Hawks that displayed their desire to improve as a team and not to focus on the scoreboard. They hustled back on every time they were on defense, they got their most rebounds of the game, and they made sure every Lobos’ shot was a contested one. Offensively, the Lady Hawks cleaned up on their passing by making straight-line passes and making sure each other were in good position before making a pass. By doing so the Lady Hawks cut their turnovers down and had much more time to setup their offense. With the crowd and their coach urging them the offense started to come. Forward Mikaylee Pablo assisted on fellow forward Jaylin Rivera’s basket to give the Lady Hawks their second made field goal. Then, with 0:13 to go in the quarter guard Michelle Iukes pulled up and hit a 3-pointer. Going into the 4th quarter the Lady Hawks trailed 7-41, but with their effort on both sides of the ball they had managed to win the 3rd quarter by outscoring the Lobos 5-4.

In the final quarter the Lobos caught fire and the Lady Hawks weren’t able to carry over their defense intensity from the 3rd quarter. The Lobos went on a 20-0 run to put the game well out of reach, but just as they have done all season, the Lady Hawks continued to fight until the end. In the final thirty seconds the Lady Hawks nearly doubled their point total when first Michelle scored a 3-pointer and then on the very next possession, Myrna pulled up from just inside half-court and swished a 3-pointer to beat the final game buzzer. The Lady Hawks lost 13-61, but showed a winner’s mentality by playing until the final buzzer. 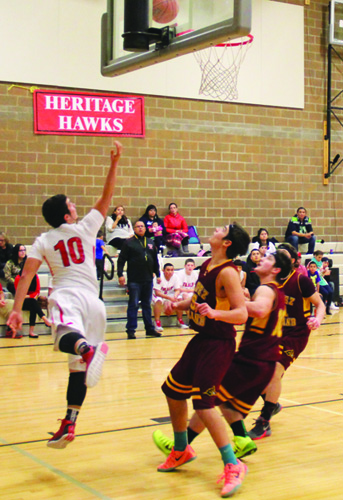 The Tulalip Heritage Hawks (6-2) hosted the Lopez Island Lobos (0-6) on Tuesday January 6, 2015. These two teams last played December 17, 2014 at Lopez Island, where the Hawks won 63-35 in a convincing fashion. The Hawks were on a 4 game winning streak until losing 53-57 at Three Rivers Christian on Saturday January 3, and wanted to get back to their winning ways in a hurry.

The Hawks came out looking to make an early statement by playing a full-court defense and making sure every Lobos shot was contested. Their defense forced the Lobos into committing six turnovers on their first nine possessions. The Hawks turned those Lobos turnovers into transition buckets, going on an 11-2 run to open the game. The 3-ball was falling early as center Robert Miles, point guard Jesse Louie and guard Ayrik Miranda each made a 3-pointer during the run. The Lobos were able to successfully break the Hawks’ press a couple times in their next two possessions that led to them scoring easily at the rim. The Hawks responded by moving the ball on the offensive end and finding the open shooters. When the Lobos called timeout with 1:52 remaining in the first the Hawks led 18-8. The Hawks ended the quarter missing their last five shot attempts, but led by their stellar defense, including 4 steals by Robert Miles, the Hawks led 18-10 after the 1st quarter.

Guard Ayrik Miranda hit his second 3-pointer to open the 2nd quarter. The Lobos answered with a jumper of their own. Forward Willy Enick collected two offensive rebounds on the next possession and scored a bucket of his own. The Lobos again answered with a bucket. When the Lobos called their 2nd timeout at the 5:00 mark of the quarter, the Hawks were leading 23-14. The rest of the 2nd quarter continued to be a back and forth affair with both teams seemingly trading buckets until the quarter ended. Going into halftime the Hawks led 31-22.

“Offensively we are lackadaisical. You guys need to move the ball, pass more. Defensively quit reaching, slide your feet and get into position. You guys have to will yourself to work harder. You have to work hard. Stop the ball. Every time we pressure the ball something good happens,” coach Cyrus “Bubba” Fryberg stated as he urged his team to not play down to the level of their opponent.

In the 3rd quarter both teams continued to trade baskets. The score was 40-28, following Ayrik’s third 3-pointer, when the Hawks called a timeout to give their starters a quick rest. On the very next play following their timeout Robert stole a Lobos inbounds pass and found Jesse wide open in the corner who hit his second 3-pointer of the game. The Hawks had their largest lead of the game 43-28 with 3:45 to go in the quarter. Moments later Ayrik displayed the defensive hustle his coach had asked for at halftime when he sacrificed his body and took a charge. For the next several offensive possessions the Hawks got 3-point happy and went 0-5 from beyond the arc. Meanwhile, the Lobos capitalized on their free throw opportunities by sinking four from the charity stripe. Robert finally ended the Hawks drought by scoring on a putback layup to put the Hawks up 45-32 with one more quarter to play.

The 4th quarter saw Robert Miles attack the hoop and come away with four quick points and Trevor Fryberg hit his first 3-pointer of the game. Following a pair of Lobos free throws the Hawks had pushed their lead to 16 points, 52-36 with 5:33 to play. The teams again took turns trading baskets with both Robert and Ayrik countering Lobos baskets with 3-pointers. In the closing moments Robert collected his 8th steal of the game to go along with his game high 22 points and 14 rebounds for a near triple-double. The final score was 62-47 in favor of the now 7-2 Hawks.