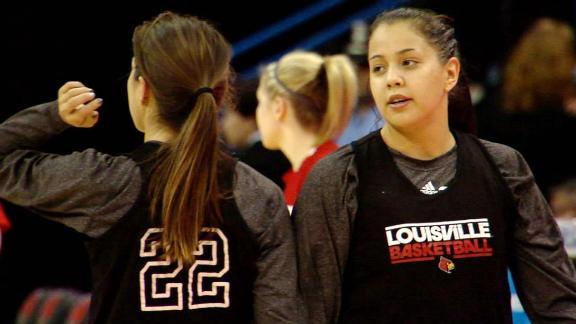 The ball’s in your court, Lady Cardinals. Oh, it’s Sho-Time.

Last night the University of Louisville men’s team won the national championship, 82-76, over the Michigan Wolverines. Tonight, the Louisville ladies take their turn, meeting mighty UConn in New Orleans for the 2013 national title (8:30 p.m./ET, on ESPN). Only one other NCAA Division I school has won both the men’s and women’s national titles in the same year: UConn, in 2009. Coincidence? It’s cetainly added motivation.

The dynamite Cardinals, who are on an uprecedented run through the women’s tourney, came to the Big Dance as a middle-of-the-pack squad with explosive potential, but riddled with injuries. After taking care of business their first two games against Middle Tennessee State and Purdue, the Cards elminated the prohibitive favorite to win it all, Baylor, in a shocking Oh So Sweet Sixteen upset. Many are calling that victory the greatest upset in the history of the tournament. And that earned them an Elite Eight match-up with the Tennessee Volunteers, the all-time leader with eight national championships. Shoot. Score. Schimmel. Cards win, Cards win. Off to the Final Four, where a seed as low as the No. 5 Cards had been only once before–and their predecessor, Missouri State, lost, in 2001.

But these are the Louisville Cardinals: No longer party crashers, they’re most definitely the life of the party. And New Orleans, home to the Final Four, really knows how to throw a party.

Sunday, the U of L overcame a daunting 10-point halftime deficit with a stunning second-half surge to knock out the Cal Bears. And tonight they play for the national title. Boom goes the dynamite.

Oh what a night … Oh what a feeling! The Cards hope this is the scene–again-after another huge upset in the women’s tourney tonight. (The Associated Press/Alonzo Adams )

If you look at history and the “facts” on paper, UConn should win this game tonight.

The UConn Lady Huskies are a powerhouse, a perennial title contender and have been since coach Geno Auriemma arrived in Storrs, Connecticut, in 1985. Auriemma has never lost a national title game while helming the Huskies–and he’s brought them to seven finals. Win it all this year, and UConn matches Tennessee’s NCAA record of most championships: eight.

Big East rivals, UConn has dominated Louisville, winning their last 12 meetings. In their most recent game on January 15, the Cards were beaten 72-58. Further, the Huskies have proven they can beat the Cards in a title game: They did so in 2009, Louisville’s only other title game appearance. Only one time in history has one school won both the men’s and women’s titles in the same season: Yes, UConn, in 2009. And UConn has also won a title in New Orleans before: in 2004. This year they have four legitimate stars: Breanna Stewart, Stefanie Dolson, Bria Hartley and Kaleena Mosqueda-Lewis. Shutting down four dominant players is a lot different than shutting down one, like the Cards did versus Baylor–even if their best player, Brittney Griner, is All-Universe. Freshman phenom Stewart has scored 82 points in four 2013 tournament games. Mosqueda-Lewis is averaging 19.5 points per game. Formidable.

But this is Cardinals basketball, 2013 NCAA tournament version. And they have the Schimmel sisters.

“We’re not done with what we’ve come out here to do and that’s win a national championship,” Shoni Schimmel said. “Why not go out with a bang?”

Oh, what a Big Bang that will be. It’s Sho-Time.

The Louisville Cardinals take on the UConn Huskies for the national title tonight at 8:30 p.m./ET. ESPN will televise the game, with ESPN3.com livestreaming the action; go to Espn.com/watchespn for further details. Before the game, at 6 p.m./ET, Discovery Fit & Health will air Off the Rez, the acclaimed documentary about the Schimmels.  For more info, click here.

‘Off the Rez’: Documentary on the Schimmel Sisters Airs Tuesday Before Louisville Plays for National Title

Jude Schimmel Gets It Done on the Court and in the Classroom, Earns Elite 89 Award