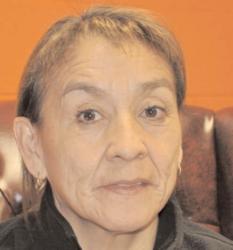 Grace Her Many Horses has dedicated many years of her life to law enforcement. After this article was published she was removed from her position at Rosebud and has since returned to work on the Fort Berthold Reservation. Article is reprinted with permission from The Sicangu Eyapaha (Rosebud Sioux) tribal newspaper.

ROSEBUD, SD – Former Rosebud Sioux Tribe Police Chief Grace Her Many Horses took a temporary job working in the Bakken Region near Newtown, North Dakota. This Bakken Basin stretches from Montana to North Dakota and it is rich in shale oil supplies. She began work in June of last year until October of the same year. It was her first experience with Man Camps. She seen them before while driving past on the way to pow-wows but this was going to be the very first time she would enter the premises and work the area as a law enforcement officer. This seasoned professional would be in for a rude surprise.

“When I first got there some of the things they talked about, in any of these areas, was they told the men ‘Don’t go out and party. Don’t get drunk and pass out. Because you’re going to get raped,” she said without hesitation.

It’s not exactly something you would expect to hear from a workers’ camp but these places are not exactly your ordinary laborers’ camps. The depth of depravity and dubious behavior are commonplace in these so-called Man Camps. No one will say that all of the inhabitants are criminal but there is definitely an element there that has rocked the local law enforcement officials to the very core of their morals and value systems.

“Sexual assaults on the male population has increased by 75% in that area,” she continued. That kind of statistic makes maximum security prisons look like the minor league. “One of the things we ran into while working up there was a 15 year old boy had gone missing. He was found in one of the Man Camps with one of the oil workers. They were passing him around from trailer to trailer.”

He went there looking for a job and was hired by individuals within the Man Camp to do light cleaning in and around their personal areas. The young teenager was forced into sex slavery. It’s the kind of thing you hear about in the ghettos of third world countries; not in the quiet and remote countryside.

The victims aren’t just males but females too. Everyone has heard by now of the missing school teacher that was kidnapped as she was out jogging, repeatedly sexually assaulted, and murdered near one of these Man Camps. The age of the Man Camp victims varies. The assailants are not necessarily looking for male and female adults. They are also going after little girls.

Grace Her Many Horse recalls one specific instance where “We found a crying, naked, four year old girl running down one of the roads right outside of the Man Camp. She had been sexually assaulted.”

There has been a significant rise in prostitution, gambling, and organized crime in these Man Camps too. The oil workers enjoy being compensated at salaries far above that of the average American blue collar worker. So when their paydays come around the predators venture out of the camps and into nearby towns and places a little further down the road. They usually move in caravans of workers with large amounts of cash stuffed into their pockets. Their large payoffs give them the buying power to obtain anything they can think of including prostitutes and hardcore drugs that have never been seen in these towns before. It has a devastating effect on the local small towns.

This former tribal police chief’s first experience talking with prostitutes that cater to Man Camps came here on the Rosebud Sioux Indian Reservation. She pulled over two vans heading out of town. They were filled with female passengers, again, of varying ages. They were heading in the direction of the Man Camps. One of the brazen occupants declared outright to this officer, “Well, you know why we are going up there.” It’s not something you would expect to hear from a woman but these passengers were determined to make it to their destination one way or another.

After taking a long breath followed by a sigh Officer Her Many Horse said, “That small tribal town has been through so much. When you go into to their casino around 11 at night you notice the flavor of the patrons has dramatically changed for the worse.” She speaks of her short time policing those camps and admits it was easy to notice how hard drugs and prostitution had increased dramatically.

She spoke with local Indians that said they used to frequent their casino but they stopped. Things had changed so much that a large number of locals dare not venture outside at night. There are strangers everywhere. Again, this is coming from a small town where most of its population is Native American and everyone had known each other’s first names and origin. Now it is hardly recognizable. Businesses were forced to open only to be shuttered later. Trash and debris has increased. Violence of all types has surged and the beauty of the land has been replaced with heavy construction vehicles and the destruction of lands once referred to as God’s Country. The traffic on local highways has increased significantly as well as the number of traffic accidents and its numerous victims that can no longer speak for themselves. Life goes on in these small Indian towns but it is a life that is bitter and strange.

Meth has been seen as having destructive effects on Indian communities before but now there are new drugs filtering onto Indian reservations from these Man Camps. “There is a new drug called Crocus. When you ingest it your skin boils from the inside-out. It leaves you with permanent scars on the surface of your skin that resembles the scales of a crocodile. It will literally eat your feet off, eat your limbs off. It’s horrible. That’s been introduced up there and it is more addictive than heroin. The drug trade is rampant up there.” She explains how the police department near that particular Man Camp is smaller than the one here in Rosebud. “They need help,” she confesses.

There are oil workers there that can’t even speak English. The sex offenders are very prevalent. “We found thirteen sex offenders in one Man Camp and that Man Camp is found directly behind the tribal casino. Our supervisors would tell us “Watch your kids. Don’t let them run through there.” Making matters worse was the fact that Grace Her Many Horses moved up there with her two young daughters ages ten and fourteen. Living in those conditions and having to worry about the safety of her children must have added years to her life. After the need for workers ends the small town is left with its eye sore oil pipeline, businesses will go bust, the introduction of these new hardcore drugs will linger on, and its shocked residents will be left to contemplate their decision for the oil pipeline in years to come.

The most startling time Grace Her Many Horses spent at the Man Camps was when her police force had to serve warrants on some of the workers and remove them from their dwellings. She and her co-workers took things very serious, suited up in full SWAT gear, went through extra-ordinary measures to could conduct their raids, and to protect themselves from harm.

“It was scary. I never had to do that before in my many years of service. I feel really bad for the local residents because the flavor of their [Indian] reservation has changed so much,” she admits.

It leads the common Rosebud resident to ask if we have enough police officers to cover the proposed Man Camp being built nearby the Rosebud Sioux Indian Reservation. She was not hesitant to argue: “No we do not have enough members on the police force. We barely have enough people to cover our [Indian] reservation right now. If you were around for the first week of January we had a double-homicide, we had unattended deaths, we had shootings, we had a major car accident, and that’s just in one week. We were so busy here at the [police] station. My whole department worked thirty hours straight. I told those guys to go home, get showered, and come back to work. That’s not even taking care of our outlying communities. This tribal police department isn’t equipped to handle what’s going to happen out there when the Man Camp arrives. The infrastructure of the towns on this Indian reservation will be forced to expand then months later it will collapse onto itself. Because I’ve witnessed it doing just that… what I am saying up there in Newtown, ND. It’s going to be really scary. Realistically speaking, we’re going to need to setup a substation for the area nearest to the Man Camp, and we got have people on call 24 hours a day there too. I don’t know how we are going to deal with that just yet. We are overwhelmed as is stands right now. Once the Man Camp moves in…” Basically, it’s not a future everyone wants to see.