Skip to primary content
Skip to secondary content
By The Arlington Times
TULALIP — A 25-year-old Tulalip man killed in a car accident Thursday in the 1500 block of Marine Drive on the Tulalip Indian Reservation has been identified.
The Snohomish County Medical Examiner’s Office has identified him as Cody J. Dunn, an enrolled member of the Tulalip tribes.
On Tuesday, Gina M. Fletcher, 47, of Chelsea, Okla., died in a one-car crash on Marine Drive at Hermosa Beach Drive. Her husband, who had been driving, was injured and taken to a local hospital.

TULALIP, Wash. – Speed and alcohol are believed to be factors in a one-car crash that left a woman dead and a man seriously injured Tuesday night near the Tulalip reservation, officials said.

Deputies and medics were dispatched to the scene, Marine Drive near Hermosa Beach Drive, at about 8:30 p.m. after receiving a report of a serious crash, said Shari L. Ireton of the Snohomish County Sheriff’s Office.

Responders found a 47-year-old woman dead at the scene.

A 49-year-old man, believed to be the driver of the vehicle, was seriously injured. He was taken to Providence Hospital for treatment.

Speed and alcohol were both believed to be causing factors, but the incident remains under investigation, Ireton said.

Marine Drive was closed between Hermosa Beach Drive and 83rd Place NW for several hours for the accident investigation, but has since reopened.

The names of the crash victims were not immediately released.

Two upcoming construction projects will affect traffic on Marine Drive in Marysville between I-5 and the Quilceda Creek Bridge. Both are Snohomish Public Works Projects.

Sidewalk ramps on the north side of Marine Drive will be upgraded to current American with Disabilities Act standards at 31st Avenue NE and 33rd Avenue NE. Work will begin on Monday, July 15, and will require single lane closures between 7:30 a.m. and 5 p.m. each day, Monday through Friday, for up to two weeks.

Marine Drive will be paved from I-5 west to the Quilceda Creek Bridge. Cemex is this year’s contractor for the county’s overlay program. The work will require coordination with several cities. The schedule is not yet finalized, but work is likely to begin after August 19 and last for approximately three days, weather permitting. All work will take place between the hours of 7 p.m. and 6 a.m.. Single lane closures will be in affect. A variable message sign will notify citizens one week before the project begins.

Access to businesses will remain open at all times, and construction crews will make every effort to minimize the impacts.

We ask for your patience during construction. Thank you!

For information about this and other projects that may affect travel on county roads, visit www.snoco.org or email questions and comments to transportation@snoco.org. 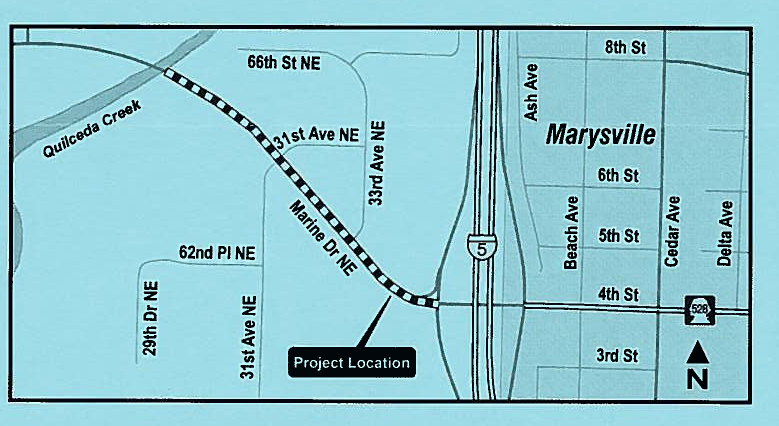