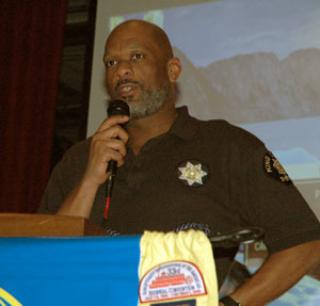 Kirk Boxleitner
Brian Taylor, a detective with the SeaTac Police Department, urges parents at the Marysville-Pilchuck High School auditorium to monitor their children’s online activity to prevent them from being victimized.

MARYSVILLE — Soroptimist International of Marysville and the Marysville PTA Council again sought to make the Marysville community aware that sex trafficking exists not just overseas or in other parts of America, but also right here in the Puget Sound region.

Brian Taylor, a detective with the SeaTac Police Department, warned the parents attending the March 5 community forum, in the Marysville-Pilchuck High School auditorium, that pimps like to recruit girls into prostitution when they’re young and vulnerable.

“I guarantee these guys hang out around your schools, during sporting events and plays, trying to romance these young ladies,” Taylor said. “They’re generally older and they like to flash their  cash. They’re psychopaths, but smart.”

Taylor described how one 29-year-old pimp first met a 14-year-old girl at the mall, and groomed her through months of successive visits, before finally provoking the girl’s father into a fight, and then making himself look like the victim of unprovoked violence from her father when she caught sight of the fight, to win her sympathies.

“He introduced her to three other girls and told her, ‘You can live with us,’” Taylor said. “He started beating her, and they traveled all around the country. He was finally indicted in Texas, and is serving 35 years in prison. These guys are smooth talkers who take their time.”

Taylor, who described himself as a strict father to a teenage daughter of his own, urged parents not to allow their children to have their computers in private areas, since pimps and other sexual predators use social media to prey upon vulnerable young girls.

“If these girls come from a home with no structure, they’ll welcome someone else’s structure, even if it’s abusive,” Taylor said. “It’s like Stockholm syndrome. It’s a trauma bond.”

Taylor was one of three police officers who founded the King County-based Genesis Project drop-in center for at-risk youth two years ago, and he proudly touted the fact that they’re about to be open 24 hours a day.

“King County has a number of nonprofits that work with at-risk youth,” said Elysa Hovard, outreach program supervisor for Cocoon House. “We’re the only one for 13- to 20-year-olds   in Snohomish County.”

Lindsay Cortes, outreach worker for Cocoon House, listed a number of conditions that put youth at risk of sexual predation, including homelessness, lower socioeconomic standing, violence in the home, low self-esteem and an unstable living environment.

“These recurring compound traumas prevent them from bonding with people or feeling secure,” Cortes said. “They’ll often run to the first person who can give them some semblance of what they’re missing.”

Hovard explained the pimps’ tactics of changing the girls’ locations frequently, training them to distrust others and forcing them to take drugs, to make them physically and psychologically dependent. Cortes elaborated that the approach of agencies such as Cocoon House is to try and empower these victims, by providing a certain measure of confidentiality, promoting self-sufficiency and not treating them as perpetrators themselves for being recruited into prostitution.

“This is a huge issue, and we need to do more to address it,” Marysville Soroptimist Board member Elaine Hanson said at the conclusion of the community forum.