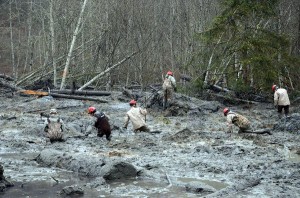 Sunday marks one year since a deadly landslide near Oso, Washington, killed 43 people.

Wednesday, Governor Jay Inslee awarded the state Medal of Valor to four communities affected by the natural disaster. The ceremony took place during a joint session of the state legislature.

Volunteer rescuer Quinn Nations accepted the award on behalf of the town of Darrington.

“You know we appreciate it on behalf of Darrington, it’s quite the honor,” he said. “But I hope you have about 2,000 more of them because there’s a lot of people here who deserve one of ‘em. Steve Skaglund said it best when he made a statement about the slide, he said ‘look what the American people can do if you just untie their hands’”

Skaglund is a logger who used heavy equipment to help build a bypass road around the area of highway covered by the slide.

The Washington state Medal of Valor recognizes individuals who risk serious injury or death to save or attempt to save the life of another. This year the decision was to give the honor to the many individuals from the surrounding area who were involved in the rescue, recovery and relief efforts following the landslide.

Meanwhile, Washington lawmakers are considering two Oso-related measures. One clarifies that a statewide fire mobilization can be declared in the event of the major natural disaster. That request was denied after Oso because it wasn’t a fire.

A second piece of legislation would require the state Geological Survey to use the best readily-available technology to identify and map hazard zones.

The most obvious example of this is using Lidar technology — something akin to a three-dimensional x-ray of landforms — to map these hazards. The bill would also require the Geological Survey to create and make publicly available a database of Lidar and geological hazard maps.

Something that is not under consideration in the Capitol is a requirement for a special disclosure statement when homes or property in a mapped hazard zone are sold. This is a requirement in California.

Secretary of State News Release
OLYMPIA…The state Medal of Merit and Medal of Valor will be presented during a joint session of the Legislature Wednesday at 11 a.m. in the House Chambers in the state Capitol. Gov. Jay Inslee will award the medals.
The Medal of Merit will be presented to Gretchen Schodde and posthumously to Billy Frank Jr.
Schodde, of Union, Mason County, is receiving the award in honor of her work as founder of Harmony Hill Retreat Center in Union, which focuses on wellness and renewal for individuals and families affected by a cancer diagnosis.
Frank, a longtime Olympia area resident who died last May, is being honored for his tireless work as a Nisqually tribal leader and dedication to the plight of Northwest salmon, the environment and peace between diverse cultures. Frank’s sons, Willie and Tobin Frank, will accept the medal on his behalf.
The Medal of Valor will be given to the communities Oso, Darrington, Arlington and Sauk-Suiattle Indian Tribe for their recovery and relief efforts following the Oso landslide tragedy last March.
The Office of Secretary of State oversees the Medal of Merit and Medal of Valor program.