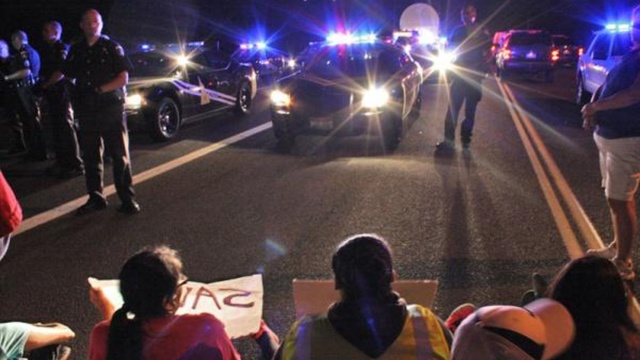 Members of the Nez Perce Tribe in Idaho block the passage of a “megaload” being shipped by Omega Morgan in August 2013. | credit: Jessica Robinson / Northwest News Network

BOISE, Idaho (AP) — Idaho Rivers United and the Nez Perce Tribe are in mediation with the U.S. Forest Service to end a lawsuit concerning megaloads on U.S. Highway 12 in northern Idaho.

Kevin Lewis of Idaho Rivers United said Wednesday the groups are seeking to have the federal agency come up with specific rules concerning gigantic loads traveling on the northern Idaho route that includes a federally designated Wild and Scenic River corridor as well as tribal land.

His ruling required the Forest Service to conduct a corridor review, and the agency on Monday released a document attempting to assess impacts the giant loads have passing through the rugged area.

Lawsuit questions whether transport is more good than harm

PENDLETON, Ore. — A third and final shipment of massive oil refinery equipment is bound for Canada after departing the Port of Umatilla earlier this week. But while the convoy lumbers south on Highway 395, opponents representing environmental and tribal concerns filed a petition in Marion County Circuit Court that would keep future loads off the road without increased public input.

State law allows ODOT to issue variance permits for oversize loads “if it determines the public interests will be served.” Yet the department declined to hold public hearings, provide notice or allow any opportunity for comments, according to the petition.

If the petitioners succeed, a judge would order ODOT to set aside permits for megaloads until determining actual public interest. Goodman and Sampson are also asking for a permanent injunction against new variance permits until the department establishes rules for public involvement.

Patrick Cooney, ODOT communications director, did not discuss litigation but said the agency issues 100,000 permits every year. In broad terms, public interest is served by allowing movement of freight and commerce across the state, he said.

“We do that in such a manner that there’s no damage caused to the system by oversize loads,” Cooney said.

The petitioners, however, claim it is not enough to find something in the public interest by only examining potential damage to highways. It requires that, overall, more good than harm is done as a result of the loads.

“The cargo is so damaging to the environment,” he said. “The end result for climate change is really disastrous.”

At approximately 400 feet long, 22 feet wide and weighing more than 900,000 pounds, the megaloads take up both lanes on two-lane highways and are too big to fit under interstate bridges. The route being used now instead runs indirectly south into the John Day Valley and east toward Homedale, Idaho, before cutting back north through Montana and into Canada.

The loads travel approximately 35 mph, and are not permitted to drive in hazardous weather. Numerous delays have already slowed the first two shipments, which Omega Morgan began moving in December.

Protesters also held several demonstrations throughout the region, resulting in some arrests.

In addition to increased carbon emissions from tar sands oil, members of the Confederated Tribes of the Umatilla Indian Reservation oppose megaloads on their ceded territory.

Sampson — known ceremonially in the Walla Walla Tribe as Peo Peo Mox Mox, or Chief Yellowbird — asked how decades of government-to-government relations can simply be ignored to accommodate these loads in his affidavit to the court.

“Help me understand why we, the people of this land, have not had voice on such an important matter,” Sampson said. “The simple passage of these loads alone is an affront to the traditional values and ecological integrity of the lands I have been stood up by my people to protect. We have a strong tribal culture that will suffer irreparable damage if the megaload is not stopped.”

Omega Morgan project manager Erik Zander has said there is no plan to use the route as a long-term industrial corridor through Oregon. Goodman said they remain concerned about the possibility, especially as oil sands deposits are developed in Utah.

That’s why the public needs a voice in the ODOT permitting process, he said.

“We feel the citizens of Oregon should have a say,” Goodman said. “It is not worth risking planetary climate chaos for profit for relatively few people.”