Lawmakers and advocates are trying to help Native American youths, who are dying in record numbers. 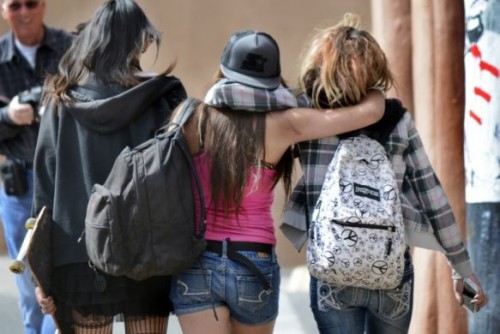 Julian Juan was only 13 when he noticed the scars. A high school freshman on the Tohono O’Odham Reservation, about an hour and a half southwest of Tucson, Arizona, Juan had a tight-knit group of seemingly gregarious friends. But even in southern Arizona’s desert heat, some of those friends wore long-sleeved shirts. Once, a friend’s sleeve rode up high enough to reveal scarred flesh.

“When I asked about it, they would say, ‘Oh, I cut myself doing yard work,’ or ‘I got caught in a fence,’ ” Juan remembered. He persistently pushed them for the truth. “They would say they were having these thoughts and would never fully explain,” he said. He could tell the people closest to him were suffering. And he wanted to do something about it.

Today, Juan is a 23-year-old junior at the University of New Mexico who serves as a youth cabinet member in the National Congress of American Indians, the largest advocacy organization for Native Americans in the country, where he’s worked with a broad coalition of young people to put mental health among tribal elders’ top concerns.

“This issue is really taboo for people in my community,” he said. “They don’t like to talk about it, and it does hurt to talk about, but it’s not going away.”

There’s a growing mental health crisis among Native American youths, and it’s being driven by poverty, violence, and lack of resources. It’s difficult to definitively assess how pervasive the problem is, partly because cultural stigma about mental illness makes it difficult for experts to access many Native American communities. According to the Centers for Disease Control and Prevention, suicide is the second leading cause of death among Native Americans between the ages of 15 and 34—a  rate that’s two and a half times higher than the national average for that age group. The crisis appears to be afflicting Native American communities across the country.

On the Pine Ridge Indian Reservation in South Dakota, nearly 1,000 suicide attempts were reported between 2004 and 2013. In roughly the same period, the local hospital has apparently treated more than 240 people under age 19 who planned or tried to commit suicide.

The crisis is getting national attention. Earlier this month, First Lady Michelle Obama touted the Generation Indigenous Native Youth Challenge, a White House–backed initiative with the U.S. Department of the Interior. The initiative has the lofty goal  of “removing the barriers that stand between Native youth and their opportunity to succeed.”

The first lady outlined a “long history of systemic discrimination and abuse,” ranging from 19th-century laws that forcibly removed Native Americans from their land to the early-20th-century boarding schools that meticulously extinguished many tribes’ language and culture. Those injustices set the tone for the dire situation in many of today’s tribal communities. Here are the statistics, according to the American Psychiatric Association: Native Americans are more than twice as likely to live in poverty than the rest of the U.S. population. They’re also nearly twice as likely as to suffer psychological distress, usually in the form of depression or post-traumatic stress disorder.

“Given this history, we shouldn’t be surprised at the challenges that kids in Indian Country are facing today,” the first lady said. “And we should never forget that we played a role in this. Make no mistake about it—we own this.”

People working in tribal communities are searching for answers. Sheri Lesansee is program manager of New Mexico’s Native American Suicide Prevention Clearinghouse. She says that understanding the diversity of 22 tribal communities is key to accessing their needs. “The outreach and technical assistance really does have to be tailored to meet the needs of that community,” Lesansee told TakePart, pointing to therapists who are well versed in the concepts of generational trauma and familiar with tribal family dynamics. At the same time, Lesanee said it’s important to focus on the tools tribal communities already possess, such as endurance. “We believe—as Native people—we are strong and resilient, and we emphasize that in prevention efforts,” she said.

Jennifer Nanez, a senior program therapist at the University of New Mexico’s Native American Behavioral Health Program, said overt racism continues to play an important role in kids’ lives. “A lot of times the mainstream perspective is that Natives can’t seem to get out of this rut—and that it’s just a characteristic of an American Indian when it’s not,” Nanez said, before echoing the first lady’s sentiments. “[This] is the result of hundreds of years of oppression, and our kids are dealing with it.”

As proof, Nanez pointed to an instance from January when a group of Native American children attending a minor-league hockey game in South Dakota were accosted by a group of white men in a skybox above their seats. The men allegedly dumped beer and yelled racial slurs at the kids, and the story eventually made headlines. “They were getting drunk, and around the third quarter they were talking crap to our kids and throwing beer down on some of them, including our staff and students…telling our students to go back to the rez,” one chaperone wrote on Facebook.

New Mexico is one of a handful of states that have tried to address the problem through legislation. In 2011, the state legislature passed a bill that, in part, created the Native American Suicide Prevention Clearinghouse, which does outreach and consultation for various tribal communities.

Even Native Americans who don’t live in tribal communities feel the impact of the problem. Christian Redbird, 22, was born and raised in Albuquerque, New Mexico, and has struggled with mental illness while attending community college. Members of her family suffered from undiagnosed mental illness. No one in her family had ever gone to therapy, and instead self-medicated with alcohol, she said. Redbird, the first person in her family to go to college, realized she didn’t have the familial and social networks to help her thrive.

“I work as a server in a restaurant and make more money than anyone in my family does,” she said. “It’s hard for me to know what steps to take when I don’t know what they are.”