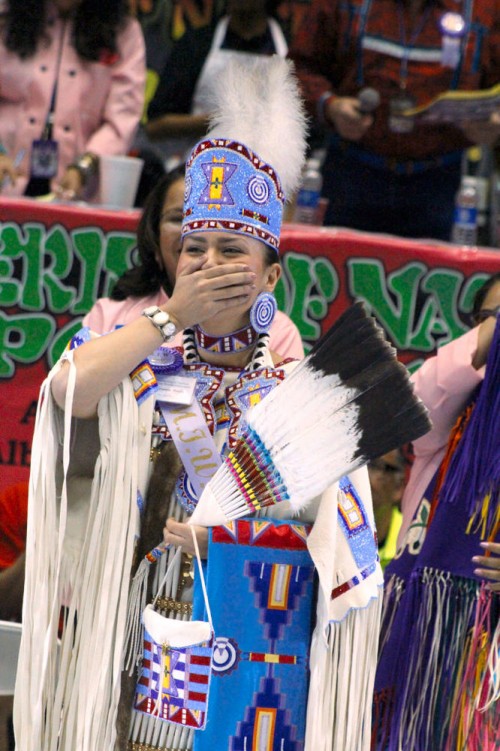 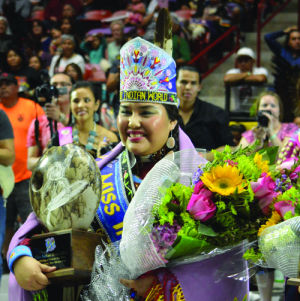 Taylor Thomas, 21, from Fort Hall, was crowned 2014 Miss Indian World at the 31st Annual Gathering of Nations in Albuquerque, N.M., this weekend.

Pageant officials say 21-year-old Taylor Thomas was crowned Saturday night at the 31st Annual Gathering of Nations at the University of New Mexico Arena in Albuquerque.

Thomas, a member of the Shoshone Bannock tribe, was chosen among 23 Native American women from different tribes and traditions.

As Miss Indian World, Thomas will visit native and indigenous communities around the world and serve as a cultural goodwill ambassador for a year.

The crowning closed three days of festivities at what is considered North America’s largest powwow. The event draws hundreds of competitive dancers and tens of thousands of spectators from across the U.S. and parts of Canada and Mexico.

ALBUQUERQUE – Kansas Begaye, 24, from Rio Rancho, New Mexico, and member of the Navajo Dine Nation was crowned Miss Indian World at the 30th Annual Gathering of Nations, the most prominent American Indian powwow in the world.

Kansas Begaye received the honor out of 16 American Indian women representing their different tribes and traditions who competed in the areas of tribal knowledge, dancing ability, public speaking, and personality assessment. The new Miss Indian World graduated from the University of New Mexico in 2011.

“Miss Indian World is one of the most prestigious honors in the Native American and indigenous world and the winner will serve as a role model for all Native Americans. Begaye will travel the world educating others about tribal and cultural traditions, and bring together native and indigenous people,”

Brittany Clause, 22 years old from Six Nations, Canada, and a member of Cayuga Nation of Iroquois Confederacy was named first runner-up at the pageant. She is currently attending Buffalo State University in Buffalo, New York.

Yonenyakenht Jesse Brant, 25 years old from Six Nations, Canada, and member of the Mohawk and Turtle Clan tribes was named second runner-up. She graduated from George Brown College in Toronto, Canada in 2009.