HARTFORD, Conn. (AP) — Connecticut’s top elected leaders are declaring victory in their efforts to see that it does not become easier for local American Indian tribes to obtain federal recognition.

President Barack Obama‘s administration on Monday issued changes to regulations that have been criticized as cumbersome and lacking transparency. Proposed new rules that were first issued in draft form two years ago were seen by officials in Connecticut as clearing the way for three groups that previously had been denied federal recognition to win the prized status.

Gov. Dannel P. Malloy and Connecticut’s two U.S. senators, Richard Blumenthal and Chris Murphy, said at a news conference Monday afternoon that revisions in the final version will prevent those groups from winning recognition and pressing claims for surrounding lands.

“I would like to thank President Obama and Vice President Biden for heeding our concerns,” Malloy said.

He said the changes ensure that groups in Connecticut that already have fallen short of recognition will be blocked from another attempt.

Connecticut has two federally recognized tribes, the Mashantucket Pequot Tribal Nation and the Mohegan Tribe, which own the country’s two largest Indian-owned casinos in the Foxwoods Resort Casino and Mohegan Sun.

The changes that were initially proposed were seen as benefiting three other Connecticut tribes — the Schaghticokes of Kent, the Golden Hill Paugussetts of Trumbull and Colchester and the Eastern Pequots of North Stonington. Federal acknowledgment can bolster a tribe’s claims to surrounding land, eliminate regulatory barriers to commercial development and bring increased health and education benefits to members.

Connecticut’s congressional delegation said they were pleased the Bureau of Indian Affairs reversed course on a plan that would have given another chance to previously denied petitioners.

“That severely flawed proposal would have forced residents, communities and the state to re-litigate petitions already dismissed with substantial evidence and review — causing needless uncertainty for landowners whose properties may have been claimed as reservation land,” they said.

Leaders of the tribal groups that had been hoping for a new path to recognition did not respond to messages seeking comment. 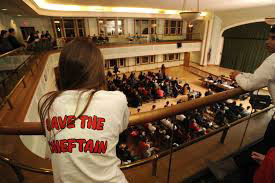