Employees of the fast-food industry demand $15 minimum wage and better workplace protections as actions expected in 150 cities across the country. 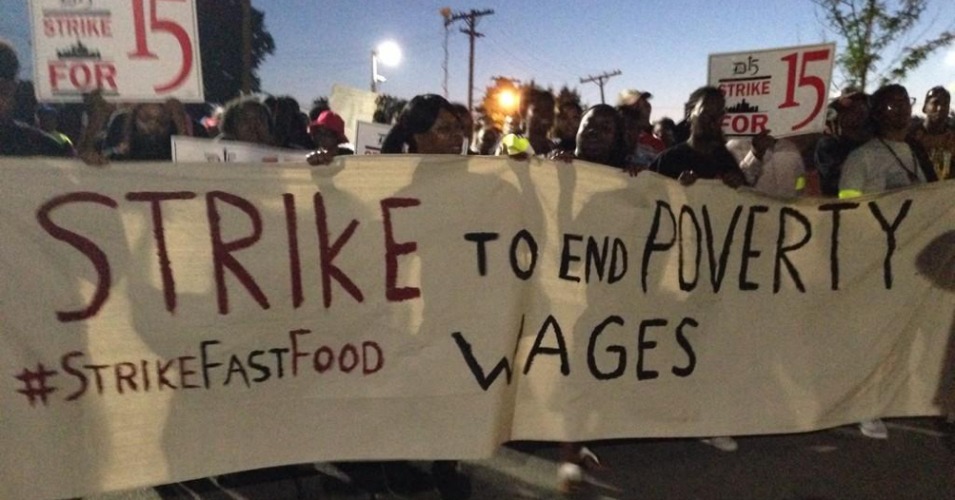 Striking fast-food workers in Detroit on Thursday, September 4 are among those nationwide demanding a $15 minimum wage, better workplace protections, and the right to join a union. (Photo: Twitpic)

Fast-food workers are out in force nationwide on Thursday as they participate in a day of action designed to highlight the scourge of low-wages and push a series of demands to combat the persistent poverty endured by those who form the backbone of  the profitable multi-billion dollar industry.

Led by organizers at FightFor15—and supported in their call by the Service Employees Union International (SEIU), grassroots organizers, and other workers’ rights groups—the fast-food employees say that singular actions that first started in New York City in 2012 and then spread to other cities have now become a national movement. Pushing for a $15 per hour “living wage” for all workers is the central but not sole demand of the workers and those who back them.

Organizers are expecting worker strikes and solidarity protests in 150 U.S. cities as employees of Burger King, McDonald’s, Taco Bell, and other chains demand a dramatic increase to the minimum wage, better workplace protections, and the right to organize and join a union.

According to NBC News:

In Kansas City, Missouri, workers are expected to walk out of 60 restaurants. Latoya Caldwell, a Wendy’s worker, is one of dozens of fast food employees in Kansas City who plan to sit down in a city intersection, lock arms and get arrested.

“We’re a movement now,” Caldwell said on Wednesday before starting a shift at Wendy’s. She and several co-workers said that 25 of the more than 30 non-management employees in their restaurant have pledged to strike. “We know this is going to be a long fight, but we’re going to fight it till we win,” said Caldwell, 31, who is raising four children alone on $7.50 an hour and was living in a homeless shelter until earlier this year.

The strikers cite frustration about their continued struggle to survive at the bottom of the labor market even as the broader economic news seems positive. “They say the economy is getting better, but we’re still making $7.50,” said Caldwell. “Nobody should work 40 hours a week and find themselves homeless, without enough money to buy them and their kids food, needing public assistance.”

In Detroit, protesters protesting outside a McDonald’s early on Thursday were arrested after they locked arms and sat down in the street, blocking local traffic.

Kaya Moody, a 20-year-old single mother who works at a different McDonald’s location in Detroit, has taken part in several protests and she admits it hasn’t been an easy sell.

“We always get the ‘Do you really think you deserve $15 an hour as a fast food worker?’ We get that a lot and I just feel like, who doesn’t deserve $15 an hour, you know? It’s a living wage. No one can survive off of $8.15 an hour, it’s almost impossible,” Moody told WWJ’s Ron Dewey.

The protests have been going on for about two years, but organizers have kept the campaign in the spotlight by switching their tactics every few months. In the past, supporters have showed up at a McDonald’s shareholder meeting and held strikes. The idea of civil disobedience arose in July when 1,300 workers held a convention in Chicago.

Kendall Fells, an organizing director for Fast Food Forward, said workers in a couple of dozen cities were trained to peacefully engage in civil disobedience ahead of the planned protests.

Dispatches and photos from other actions are being shared on Twitter under the #StrikeFastFood hashtag: