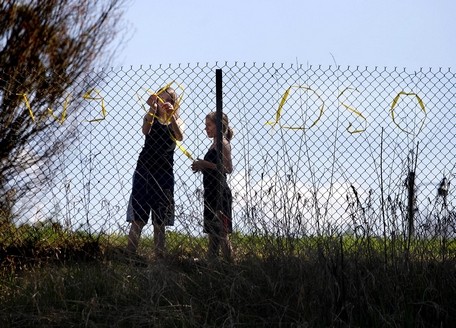 Sofia Jaramillo / The Herald
Ava Yeckley and Darby Morgan, both of Arlington, put up a sign Tuesday reading “We heart Oso” on Highway 530.

By Jerry Cornfield and Amy Nile, The Herald

OLYMPIA – The deadly March 22 Oso mudslide and subsequent flooding have caused at least $32.1 million in damage to public infrastructure, according to preliminary assessments by state and federal authorities.

Gov. Jay Inslee cited that figure Tuesday in a letter sent to President Barack Obama asking for federal assistance for local and tribal governments to help cover an array of costs incurred in clearing debris and repairing roads and waterways damaged by the disaster.

The slide not only wiped out the Steelhead Drive neighborhood, it has blocked the usual route into Darrington along Highway 530.

“The landslide and upstream flooding it caused brought down death and destruction on these tight-knit communities in Snohomish County,” Inslee said in a statement. “These are our friends and neighbors and we’re racing to help repair their roads and other public facilities in the Stillaguamish Valley. If the president acts on this request, we can help do the job even faster.”

Also late Tuesday, medical examiners said they had received the remains of 28 slide victims and have identified a total of 22. The names released today were: Brandy Ward, 58, Thom Satterlee, 65, Lon Slauson, 60 and Adam Farnes, 23.

The confirmations lowered the total of missing by two; 20 people still are presumed missing as a result of the slide.

On Monday, Inslee requested the president issue a Major Disaster Declaration to free up federal assistance for individuals, households and businesses affected by the disaster. This could include money for temporary housing and immediate needs, and unemployment insurance benefits.

In that letter, he pointed out 40 homes were destroyed and up to 30 families left in need of long- and short-term housing. It pegged the estimated damage to residences and structures at $10 million.

Inslee wants the president to make two public assistance programs available in Snohomish County, and to the Sauk-Suiattle, Stillaguamish and Tulalip Indian Tribes.

Travis Phelps, a spokesman for the state Department of Transportation, said it is too soon to know the highway’s condition.

The expanse of the Oso mudslide miniaturizes people and their machines.

The workers tasked with clearing the 1.2-square-mile debris field are comparing the devastation to 9/11.

“When you get down there, it looks like the World Trade Center,” said Ed Troyer, of the Pierce County Sheriff’s Office. “Instead of steel workers, it’s loggers.”

Gerry Bozarth, a debris specialist for Spokane Emergency Management, said the tangle in Oso is as complex as that from the terrorist attacks in New York.

Bozarth said searchers may never find all of the victims. The questions families have may never be answered.

Crews continued to search for the missing Tuesday. Some 600 yellow-and-orange-clad workers donned their hard hats. They were looking through piles of hazardous material sometimes 80 feet deep.

Crews are scratching the surface of the debris field, targeting the places they believe people most likely are buried. There are splintered trees, tires, shredded roof tops, pipes, chunks of walls and people’s photos strewn in the muck.

Water that earlier flooded a portion of the site on the southwest corner is now mostly gone.

Search conditions have improved since the first few days when crews spent much of their time fighting the water.

“It created a hazardous material soup that was exhausting to crews,” Bellevue Fire Lt. Richard Burke said. “They were sinking to their chests in this muck.”

While pumps droned constantly, moving the water out, crews weren’t hauling dirt away.

The contaminated soil is shoveled, sorted for people’s belongings, then piled up. Right now, it is not being moved off site.

Workers and search dogs must go through a decontamination process before leaving to limit the risk of spreading diseases such as dysentery.

On Tuesday, a sour smell rose from the site. It seemed to be a combination of spilled septic tanks, fuel, household products and exhaust from heavy machinery

The operation is much more organized nearly a dozen days after the slide, officials said. Soldiers and others have stepped in, relieving some of the weary workers.

“We want to go home and look the citizens of Oso and say we did our best,” Burke said.

“The strength in this community and their commitment to one another is just unbelievable.”