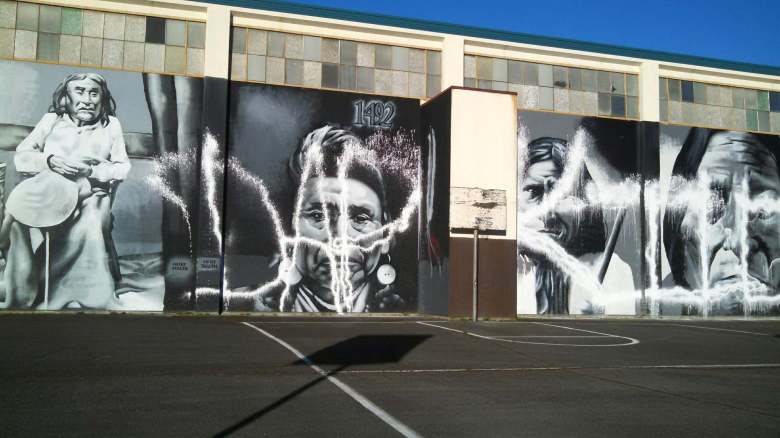 The Native-American murals at Wilson-Pacific, a Seattle Public Schools building, have been vandalized. (Andrew Morrison)

Murals painted by local Native-American artist Andrew Morrison at the Wilson-Pacific school building have been desecrated. 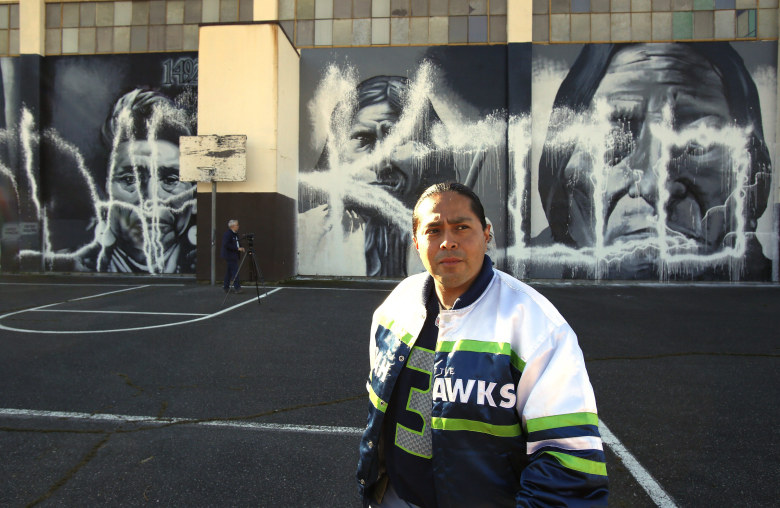 Muralist Andrew Morrison filed a police report Monday for damage done over the weekend to his Native American murals on the side of the Wilson-Pacific school building. (Mark Harrison / The Seattle Times)

Andrew Morrison’s murals at Seattle’s Wilson-Pacific school building were desecrated over the weekend. The words DAPKILO were painted over, said Morrison, who sent me the photo you see above. DAP is the name of a crew of graffiti artists. It stands for Down Around Pike, said Morrison, and KILO is the name of one of their artists. “We know who did it,” Morrison told me over the phone. “He was stupid enough to write his own name.”

Morrison said the only explanation to the crime is “jealousy and hate.” He said the murals, which the city agreed to preserve intact, have become known and are a celebration of life. “Only someone who is against that could do this.”

The towering murals on the Wilson-Pacific School campus in North Seattle are among just a few notable examples of local public art honoring Native Americans. In 2013, they seemed destined for destruction when Seattle Public Schools announced plans to demolish the buildings to make way for a new campus. The school district proposed taking photographs of the murals and displaying them in the new school so the artwork could be remembered. But officials eventually changed their mind and agreed to preserve them given their cultural and historical value.

Johnpaul Jones, an architect involved in the preservation process, plans to visit the site Tuesday morning to assess the damage.

Below is a sketch of the murals from my article last month. 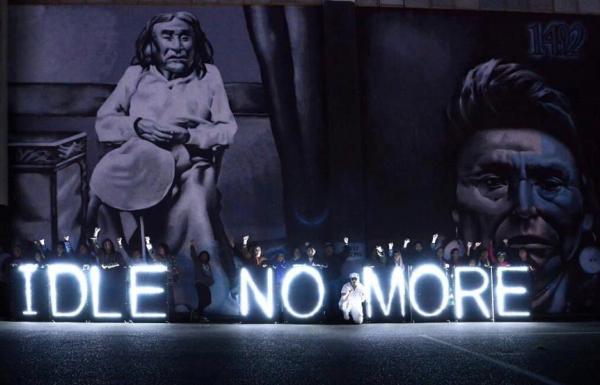 SEATTLE – For months, murals depicting Chief Joseph, Chief Seattle, and Natives in regalia and on horseback have been threatened with demolition—but a grassroots effort to save them may yet prove successful.

Supporters say the murals on the outside walls of the Seattle School District’s Wilson-Pacific Building are more than art. They are symbolic of the indigenous presence in the Pacific Northwest’s largest city.

Artist Andrew Morrison, Haida/Apache, painted the murals to honor the area’s Native peoples and historical leaders, such as Chief Si’ahl, the Duwamish-Suquamish leader for whom the City of Seattle is named.

So when the school was threatened with demolition to make way for construction of a new elementary and middle school—and Indian Heritage School students moved to a classroom at a nearby mall—the indigenous community rallied.

As of this writing, it appears their voices are being heard. Construction of a new elementary and middle school will still happen, but there’s a chance the walls containing the murals will be incorporated into the new school buildings. The project architect, Mahlum, has a reputation for engaging communities in the design process and incorporating into the final design those things that are important to the community. Mahlum’s previous Native-community projects include the Puyallup Tribe’s Chief Leschi School.

“The district wants to honor this work and has reached out to have ongoing discussions with the artist on how to preserve the murals,” Seattle School District project manager Eric Becker told ICTMN through the district’s public information office. “It is the district’s intent to honor the murals. Art historians have suggested several ways that this might happen. We will continue to work with the artist, design team and community to determine which option will be selected.”

Regarding how the campus’s role in Native education and racial integration might be represented in the new school buildings (as Wilson-Pacific School, it was one of the first integrated schools in Seattle), Becker said, “The School Design Advisory Team, comprised of district staff, the architect and community members, will meet to discuss all aspects of the new [elementary and middle school].”

Superintendent Jose Banda wrote in a May 10 letter to Indian Heritage School families, “a design team will be formed to look at future uses and design of the campus.” In addition, he invited applicants for a new Native American Advisory Committee to advise the district on implementing Native American education in local schools.

Tracy Rector, a filmmaker and mayor-appointed member of the Seattle Arts Commission, participated in the rallies to save Indian Heritage School and the murals.

“Andrew has rallied and inspired people to come around and support this sacred historical space for Native American families,” said Rector, Seminole/Choctaw. “It’s been powerful. It sounded like the school district was bent on tearing [the school and murals] down. This has changed the game quite a bit.”

In 2001, after his freshman year of college, Morrison volunteered at the school and painted the first of his 25-foot murals, often enlisting the help of students and community members.

The controversy began last year, after the district proposed a tax levy to replace the 60-year-old Wilson-Pacific buildings with a new middle school and elementary school. The Urban Native Education Alliance and the United Indians of All Tribes Foundation called for the district to renovate Wilson-Pacific, rather than demolish it, in so doing ensuring the Indian Heritage School would continue and the murals would be preserved.

The tax levy was approved by voters. The school district made plans to move Indian Heritage School students to the middle college program at Northgate Mall for the 2013-14 school year, and proposed making digital images of the murals so they could be replicated later. Morrison wouldn’t consent to the replication of his work. On March 6, the school board approved the contract for construction of a new school and recommended only a Native American honoring of Wilson-Pacific prior to its demolition.

On May 15, an Idle No More rally was held at school district offices. At the school board meeting that followed, Urban Native Education Alliance chairwoman Sarah Sense-Wilson, Oglala Lakota, said the district has withdrawn resources and removed Native instructors from Indian Heritage School over the years, “rendering the program a shell of what was once a vibrant, successful, visible program.”

Sense-Wilson said merging Indian Heritage School with the middle college program at the mall would be an act of institutional racism and classism, “assimilating Native learners and further distancing them from their cultural identity, heritage and connection with the Native community, and ultimately a poignant loss of a distinct, unique Native-focused program, which at one time bridged culture, tradition, history, Native perspective and connection with the community.”

She asked that Indian Heritage School be moved to another campus. “We do know there is space at various schools,” she said.

Dr. Carol Simmons, a retired Seattle educator, alluded that destroying a Native school program and Native art on a historically indigenous site would be a continuation of the “historical devastation and destruction of Native culture and the mistreatment of Native students in our schools.”

She said, “These murals must be preserved with dignity and not disrespectfully digitized. This important school must be treasured and not demeaned by placing it in a shopping mall.”

Other speakers included former state Sen. Claudia Kauffman, Nez Perce, who also asked that a permanent home be found for Indian Heritage School. “This is more than just an educational institution. It’s [a place] for the community in which we gather together.”

He referred to the murals as “artifacts” and said the district will work “to ensure we protect those artifacts.”

On May 22, Morrison and Banda had a conversation and made amends; their relationship had been strained by months of protests and press coverage. Morrison is creating a portrait of the late Bob Eaglestaff, principal of Indian Heritage school in the 1980s and ’90s, as a gift to the school district. He’s also offered to paint, at his own expense, mural portraits of Geronimo and Sitting Bull at the current Indian Heritage School campus.

“Chief Seattle, Chief Joseph, Chief Geronimo and Chief Sitting Bull will complete our four directions and this will solidify a commitment between the Seattle Public Schools, the Native American community, my family, and me,” Morrison said.

For more of the story, visit andrewmorrison.org.

Artist Andrew Morrison talks to Native Youth Conference participants about the murals he painted at American Indian Heritage Middle College High School. The conference was April 16-18 at the school. The walls with the murals may be incorporated into the new school that is proposed to be built at the site. Photos courtesy Andrew Morrison.

An Idle No More rally was held May 15 at the Seattle School District offices. Photo by Andrew Morrison.